The line, which includes sport shirts, sweatshirts, T-shirts, jodhpur shorts, caps and jackets, will launch at Beams stores in Japan on Friday. 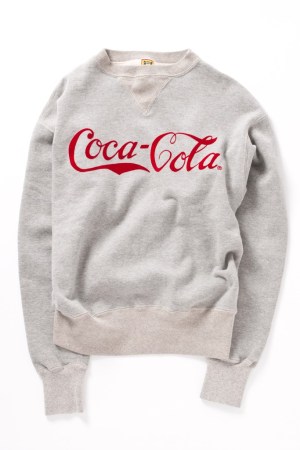 Coca-Cola is about to get a fashion pop thanks to Nigo, the Japanese designer who created A Bathing Ape.

Under his newest label, Human Made, Nigo has created a capsule men’s wear collection that takes its inspiration from vintage Coca-Cola imagery. The line, which includes sport shirts, sweatshirts, T-shirts, jodhpur shorts, caps and jackets, will launch at Beams stores in Japan on Friday. It will also be available at Present in London, Haven in Canada and RSVP Gallery in the U.S. as well as online.

The Coca-Cola x Human Made by Beams line is designed to re-create 20th-century industrial workwear and Nigo used pieces from his own collection of Coca-Cola memorabilia when creating the collection. The Shop Coat, for example, uses the Coke logo from around 1910. It will retail for $536. The Cover All jacket ($470) features a chinstrap and watch pocket common to jackets of the early 1900s, and the cotton logoed sweatshirt ($195) was produced on a vintage cotton knitting machine.

“I have been wearing Coca-Cola since back in high school — be it vintage T’s or my retro red Coke leather jacket, which is one of my most prized possessions. I was also the Japan Coca-Cola yo-yo champion back in the Eighties, so this collaboration was a long time coming,” said Nigo.

Beams and Coca-Cola first collaborated in 2011 on the beverage brand’s 125th anniversary and the retailer was instrumental in bringing Nigo on board for the latest collection.

“We were captivated by Nigo’s longstanding fondness for Coca-Cola — both the beverage and the fashion. The fact that this new collection was inspired by the vintage fabrics and stitching found in Nigo’s own Coca-Cola collector pieces brings a real authenticity to it,” said Kate Dwyer, head of global licensing for Coca-Cola.