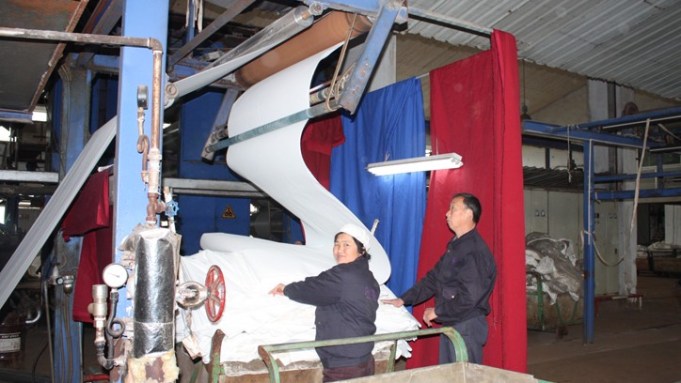 The Natural Resources Defense Council believes the apparel industry’s efforts to lower its environmental impact will require brands and retailers to look further down their supply chains to become more familiar with, and ultimately take more responsibility for, their suppliers at the fabric level.

The NRDC’s interest in the textile sector came about in 2007 after it opened an office in Beijing tasked with tackling pollution issues in the country. Linda Greer, director of the NRDC’s health and environment program, traveled to China late that year to assess the nation’s leading polluters and ways in which the NRDC could work with companies and the Chinese government to lower their environmental impact. The NRDC is a nonprofit environmental protection organization founded in 1970 that now employs a staff of more than 300 lawyers, scientists and policy experts.

Greer expected her focus to land on the usual pollution suspects like the steel, cement and chemical industries, but quickly saw that the textile industry was an equally large polluter.

“The textile industry really distinguished itself as one of the biggest water polluters in the country. I was shocked,” said Greer. “It was abundantly clear when I toured a couple of mills that this was just a giant mess.”

However, she also felt that the similar machinery and processes being used across the textile sector would allow improvements to be made quickly and without massive investments on the part of factory owners.

“I knew within five minutes of tours that there were many ways to save money,” said Greer, who has a background in industrial efficiency and pollution prevention issues.

Greer felt it would be more effective to make the business case for improving standards rather than solely advocating for the environment.

The result was the launch of the Responsible Sourcing Initiative in 2008, aimed at getting major brands and retailers to lower their environmental impact by focusing on the fabric mills and dye houses that tend to inflict the greatest environmental impact in the supply chain. The NRDC was able to draw some of the industry’s biggest names to the project. Wal-Mart Stores Inc., Levi Strauss & Co., Gap Inc., H&M, Nike and Li & Fung Ltd. are all participating, providing names of some of their mills and participating in meetings and document reviews.

“They’ve really helped us stir the pot in terms of what the issues really are,” said Greer of the participating companies.

The NRDC conducted half-day surveys of some 25 factories in China and picked five it felt represented the country’s typical enterprises. Each of the factories counted at least two of the participating companies as clients. Extensive audits of the factories were done to assess everything from energy and water usage to insulation and lighting systems. From there, the NRDC developed 10 low-cost best practices that would reduce environmental impact and save factories considerable amounts of money within a year of being implemented.

“The solution is not to have the 50,000 textile mills in China each hire their own expert to come in and do their own audit, which will never happen in our lifetime, but to come up with 10 relatively quick and easy but environmentally significant improvements that will for the most part work in most places,” said Greer.

The strategy also recognizes that the majority of factory owners and managers aren’t well-educated businessmen. Greer said the opposite is often the case, with few having completed high school and even fewer having a background in engineering or business.

“For the most part, they don’t think about spending money to save money,” she said. “It’s really almost a literacy project over there as much as it is an environmental technology project.”

Many of the solutions offered by the NRDC fall under the category of basic housekeeping. The 10 solutions include finding and preventing leaks; reusing steam and water used in bleaching; recovering heat; maintaining steam traps; installing proper insulation; recovering heat from smokestacks, and making compressed air systems more efficient. Depending on the size of the factories, each of these steps can reduce costs from $1,500 to $95,000.

The NRDC claims its solutions to some of these problems can save 25 percent of water usage and 30 percent of fuel consumption, and will pay for themselves within eight months. For example, simply fixing leaking pipes and making sure hoses are turned off when not being used can result in significant savings. The NRDC’s studies found that a two millimeter steam leak translates into an energy-loss equivalent of more than 10 tons of coal in a year.

Greer acknowledged that Wal-Mart, in particular, has moved quickly to engage with suppliers.

“They’ve been the first ones out of the box to go to their top 150 garment suppliers and say, ‘We need to know where you get your fabric,’ ” said Greer. “They now have a list of 400 mills in China where they get their fabric, and they’re poised to send a survey out to those mills and sort where they fall in terms of resource use and efficiency innovations. They’ll then move ahead with their carbon commitment. They want to do five showcase mills and then get up to 25.”

Companies like Levi’s and Gap have been at the forefront of social responsibility, but Greer says even they have not taken a serious look at the textile suppliers. She believes the reason is that brands and retailers have largely been focused on issues at the cut-and-sew level, particularly labor issues at their garment factories.

Now that the guidelines have been developed, Greer said it is now up to the companies to introduce the policies into their own supply chains, a process that will take time and will take shape differently in each company. Greer is looking for each firm to start a pilot program that will showcase improvements that can be made at a handful of each of their suppliers. While the onus may now be on the brands and retailers to act, the NRDC doesn’t intend to step back.

“We are not going to sit by and watch what happens, so we are full of suggestions,” Greer added.