Plans to expand retail into New York and other major markets. 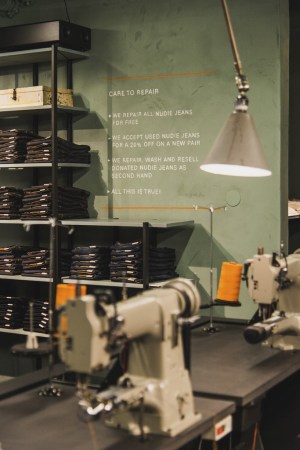 Nudie Jeans, the Swedish jeans firm known for its dedication to raw organic denim and sustainability, is gearing up for a substantial push in the U.S.

Underlining a plan to expand its wholesale and retail operations in the world’s largest consumer market is a shift to a direct-ownership model from an 11-year-old distribution agreement under which Want Agency has been responsible for sales, distribution and marketing in the U.S. and throughout the Americas.

The transition to direct management of Nudie’s North American business kicks in on June 1 with Nudie taking complete responsibility for selling and shipping with the arrival of the spring 2015 season.

The change comes as Nudie puts a solid year behind it and embarks on plans to accelerate growth in a number of markets outside its home in Sweden. Last year, sales were up 18.5 percent to $64 million worldwide, from $54 million in 2012, with wholesale volume up 14.6 percent, to $55 million from $48 million, and retail revenues, including e-commerce sales, ahead 50 percent to $9 million from $6 million. Germany, South Korea and the U.K. provided the strongest growth last year while the company returned to Greece and initiated distribution in Russia.

“We have positioned ourselves for many years as the midprice denim brand in somewhat premium exclusive distribution channels at wholesale, putting us in a position for growth, which we saw strongly in 2013,” said Åhrman. “For 2014, we have higher expectations.”

Sources of growth will include the push into the U.S. and a diversification beyond jeans into tops, outerwear and accessories, which Åhrman said are still relatively small but primed for expansion after enhancements to the product-development team. In its jeans business, he expects regular fits to make a comeback this year after a strong performance by tight and slim fits in 2013. The regular-fit Steady Eddie model — with a normal rise and slight taper at the bottom — is expected to generate much of the increase in more relaxed silhouettes.

Retail — which increased its share of revenues to 14.1 percent last year from 11.1 percent in 2012 — is seen more as an engine for wholesale growth and is increasingly tied to the company’s dedication to sustainability. Stores, like the Berlin store opened in collaboration with 14 Oz. and Bread & Butter founder Karl-Heinz Müller and a second Swedish unit in Stockholm, have been christened as “repair shops” where customers can have jeans damaged by repeated wearing restored to a more acceptable state without charge. Nudie’s Web site invites customers to take them up on the offer and points out that tighter-fitting jeans and those subjected to laundering or other treatment before sale are more vulnerable to visible wear.

Nudie has 95 wholesale accounts with 150 doors in the U.S. and an additional 43 with 85 stores in Canada. Major accounts include Barneys New York, Atrium and Mr Porter.

Nudie’s own retail network includes five of its own shops, including three in its home market of Sweden, two of which are in Stockholm and a third in its headquarters city of Göteborg, and one in London. As part of the transition to a direct-ownership model, a combination showroom-store in West Hollywood will become a Nudie-owned unit next month and subsequently be renovated.

Additionally, there are five distributor-owned stores in Japan, four in Australia and two in Europe in addition to the Berlin joint venture.

With the change in operations, Nudie is planning to expand North American retail, including wholesale penetration.

The firm is hunting for space in New York and Los Angeles, where it would like to eventually have multiple units. Among the top-priority markets for further expansion in North America are San Francisco, Vancouver, Montreal and Toronto.

While its North American management organization is modified, the company remains on track to make each of its products traceable through the supply chain, from fiber to store. For the past year, Nudie has had a production guide, in which it lists all its suppliers and summaries of their sustainability and safety audits, on its Web site.

“Transparency is not a marketing tool for the brand,” said Åhrman. “It is simply how we work.”