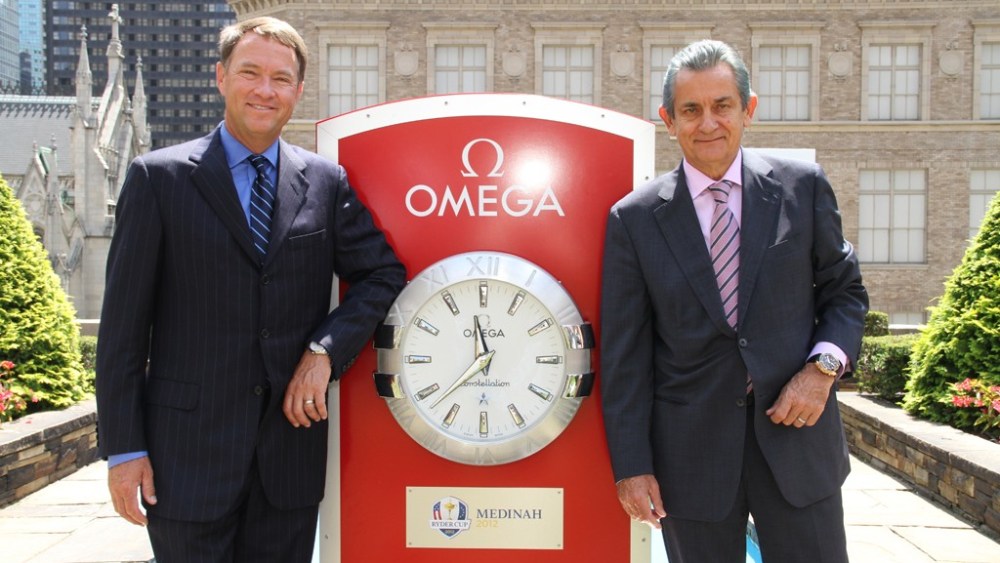 NEW YORK — Omega has deepened its commitment to golf by naming a new brand ambassador and expanding its association with the PGA of America.

On Monday, Omega president Stephen Urquhart revealed that 2012 Ryder U.S. Cup captain Davis Love 3rd has signed on to be its newest ambassador, joining Sergio Garcia, Greg Norman and Michelle Wie. At the same time, the Swiss watchmaker will become the official timekeeper of the Ryder Cup for the first time when the U.S. and Europe tee off at the Medinah Country Club outside Chicago from Sept. 28 to 30.

In a press conference in a rooftop garden in Rockefeller Center, Urquhart presented Love with a Seamaster Aqua Terra Captain’s watch, a special-edition timepiece that will also be presented to each golfer on the U.S. team. It has a 41.5-mm. brushed and polished stainless steel case with a polished bezel. A screw-in caseback has a sapphire crystal that shows the movement.

In honor of the tournament, Urquhart said the Captain’s watch has “very discreet” red, white and blue coloring. The players’ watches will be embossed with their names and the Ryder Cup logo. Unembossed versions will retail for $5,500.

Omega signed a five-year deal with the PGA in 2011 to be the association’s official timekeeper, meaning it is responsible for on-course timekeeping at all PGA events. But Urquhart said that the PGA’s “grassroots” efforts to promote the sport of golf is the company’ primary motivation for the sponsorship deal.

Love, who has won 34 professional tournaments and played in six Ryder Cups, said Omega’s association with the PGA really spoke to him. “My father was a lifelong PGA member,” he said. “When I was a little kid, I was the pro’s son in the cart barn. I wasn’t allowed on the course. I wasn’t a country club kid, but I had a leg up and I had a great golfer as a teacher. So it means a lot to me to be associated with the PGA, the Ryder Cup and Omega. And it’s an honor for me to help give back to the game of golf.”

As captain of this year’s Ryder Cup team, Love will choose four of the 12 golfers who will compete on the U.S. squad this year. The other eight are determined by their point rankings in PGA events. Although Love doesn’t have to make his final selections for a little while longer, he said Tiger Woods, who won again on Sunday at the AT&T National, is “on top of the list. If he’s healthy, he’s going to play well and he’s right on form now.”

Beyond that, Love said while the other professionals on tour may not bribe him for a spot on the Ryder Cup team, “I’m real popular in the locker room right now. And I might get some free dinners out of it.”