Fabrics can be the key to differentiating luxury from the rest of the pack. 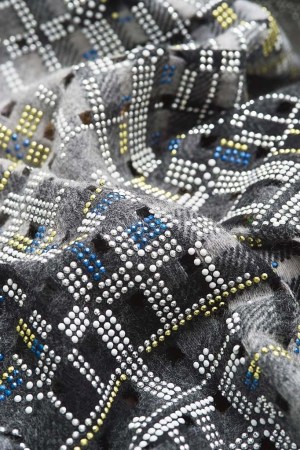 In a world where fashion is available at all price tiers, innovative fabrics can differentiate a luxury collection from the masses.

Marco De Vincenzo, a hot name to watch in Milan, used a chic dégradé gray flannel with laser cutouts that was embellished with thermo-welded multicolor studs.

“I wanted to revisit the classical tartan pattern by giving it an amusing touch,” he said. “The combination of an open-worked wool and a softened Lurex fabric builds an unusual version of the Scottish kilt, more feminine and contemporary.”

New York-based Chris Gelinas bonded a luxe silk tulle plissé with an industrial techno netting incorporating elements of aluminum “to give it a high-shine silver finish,” he said. The netting is used for interlining car seats, but he used it for collars and cuffs. “It was stitched with a sandwich technique using horsehair tubing to mimic an exaggerated rib.”

Creative director Blue Farrier, who joined the London label last year, took her cues for the textured, printed wool from the linoleum flooring in her great-aunt’s house.

“The textures within the floor were quite interesting, and I thought the way we could [represent that]…was to develop different fabrics,” Farrier said. One is black wool printed using screens for a textured pattern of teal and raspberry specks, flocked with white yarn, for a puffy dandelion effect.

Gareth Pugh typically veers toward Goth romance, and for fall, the designer featured a fascinating mirrored film fabric that added another facet to his aesthetic.

“This fabric is more of an industrial film that is actually semitransparent, like a two-way mirror,” said Pugh, who shows in Paris.  The overall effect is raw and textured, as well as futuristic and, for Pugh, irresistible. “I saw it and I knew I had to have it in the show.”