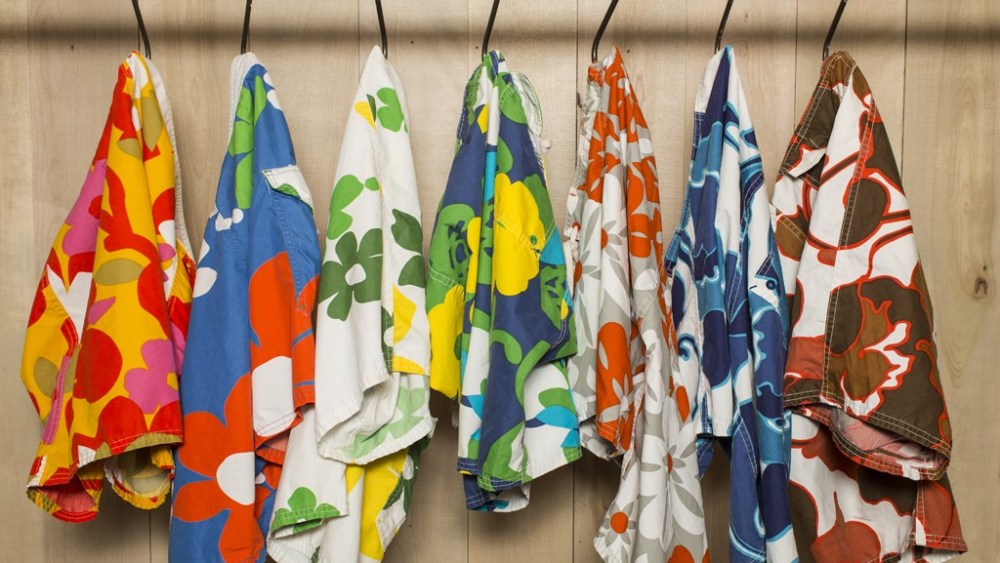 Original Jams is poised for a colorful comeback next spring.

The iconic surf brand, which reached its peak in the Eighties, has been revived by new investors, who have given a fresh spin to the line famous for its vivid floral prints. Under the aegis of Santa Monica, Calif.-based Bedrock Creative Office, Original Jams will be back in stores for spring 2014 with a full lineup of men’s and women’s swimwear and casual sportswear — all inspired by those Hawaiian prints.

“This brand is so rich in history. It’s one of those brands that really helps define the history of American apparel,” said Maurizio Donadi, cofounder and chief creative officer of Bedrock Creative Office.

The spring assortments include men’s swim trunks in patchwork, cargo and drawstring styles, with women’s swimwear to be added in 2015. Men’s and women’s sportswear offerings include madras shirts, military-style jackets, terry cloth sweatshirts, chino pants and T-shirts with hand-drawn graphics. The brand’s signature prints are used as accents on many pieces, such as on the back of a shirt collar or the inside pocket of a jacket. Denim pieces are patched with the printed surf fabric.

Most of the fabrics in the line are cotton, with some linen and voile pieces in the mix, all of which is washed down for a lived-in feel and soft hand. Fits are true to size, steering away from the baggy look of earlier Original Jams styles, but not hewing too closely to the skinny-fit territory of some premium brands today.

Original Jams was founded by the late David Rochlen, a onetime analyst for Rand Corp. and an avid surfer, in Honolulu in 1964. The first pair of trunks were, in fact, created by Rochlen’s wife, Keanuenue, from a pair of cutoff pajamas at the couple’s kitchen table — hence the name, Jams, which stems from “pajamas.”

After riding a wave of popularity through the late Eighties, the brand was shuttered in 1988 and has remained largely dormant since. Last September, Rochlen’s son, Pua, sold an 80 percent stake in Original Jams to Bedrock Manufacturing Corp., the Texas-based investment and brand management vehicle for Tom Kartsotis, the founder and former chairman of watch giant Fossil Corp. Bedrock Creative Office, which is overseeing the relaunch, is a partnership between Bedrock Manufacturing and Donadi, previously a senior executive at Levi’s.

Retailers got their first peek at the revamped Original Jams at the Bread & Butter show in Berlin earlier this month. The brand is targeting specialty retailers this first season and Donadi is aiming to be in 150 to 200 accounts in the spring.

“We generated a lot of interest at Bread & Butter — we probably have over 500 inquiries from stores — but we haven’t finalized any orders yet,” he noted. “We’ll be doing that this month and in Las Vegas at the Liberty show in August.”

The originaljams.com e-commerce site will launch early next year. The company plans to open a freestanding store in Venice Beach or Santa Monica in the spring and is considering real estate options now.

The military-inspired elements in the designs complement the floral prints in an unexpected, but historic, way. “A lot of surfers in Hawaii and California in the Sixties were stationed at military bases on the Pacific. They would wear a lot of military gear and jackets casually, after they surfed,” explained Donadi. “So we went and looked at vintage surplus and military pieces and we added pockets with the same prints as the surfwear.”

Original Jams is separate and distinct from Jams World, a casual lifestyle brand that was started by Rochlen in the Eighties as an offshoot of Original Jams. Jams World, which is now headed by Pua Rochlen, targets a less trendy, more mature customer with its printed resortwear than Original Jams.