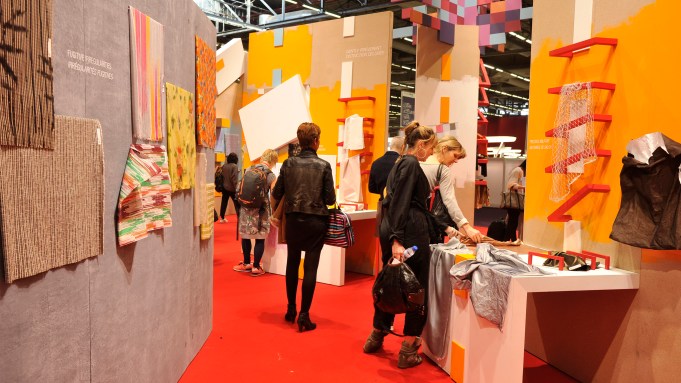 PARIS — As fashion brands begin pondering a switch to show-now, buy-now collections, textile manufacturers are rushing to adapt their own calendars.

Organizers of the Première Vision Paris trade fair, which ended its three-day run here on Thursday, said they will launch Blossom Première Vision to help designers put together their pre-collections.

“Pre-collections account for 60 percent of a brand’s total business,” said Gilles Lasbordes, PV’s executive director. “They are never on sale and are a creation apart, and they need to be ready two months earlier than the main lines.”

Lasbordes said the first Blossom show would take place July 6 and 7 at the Palais Brongniart in Paris, followed by a second edition on Dec. 13 and 14. About 60 to 70 exhibitors are expected to participate in the event.

But the new shows weren’t greeted with universal acclaim — just as the whole show-now, buy-now concept in fashion has sharply divided the industry. Designers liked the idea of the Blossom shows since they have been complaining for some time about PV’s late timing. But the idea was met with resistance from textile makers, who feel the trade show market is saturated as it is.

“There are too many shows on the agenda. We go to 12 to 15 different fairs per year,” said Sergio Tamborini, chief executive officer of the Marzotto group, which comprises roughly a dozen textile brands. “In an ideal system there should be two big shows in Europe, preferably in Paris and Milan, accompanied by regional fairs targeting niche markets,” citing Mare di Moda for beachwear as an example.

Tamborini said the new model of designer consumer shows could be an advantage for textile makers, noting that brands would have to make up their minds more quickly about which fabrics they want and stick with their choices, ultimately posing fewer risks to producers.

Prints and solid colors would likely emerge as winners, he suggested, versus yarn-dyed materials that require more time.

Tamborini said he was optimistic about the business outlook for the first six months of 2016 but was more hesitant about the second half.

“There are a lot of changes in the men’s wear market, which usually is more stable than women’s,” he said. “The departures at Brioni, Berluti and Zegna mean that there will also be creative changes.”

Alessandro Sartori, who is slated to make a move to Zegna after five years at the artistic helm of Berluti, said the consumer shows were not up his alley.

“I’m worried this will make the collections more commercial, not leaving enough room for creativity,” Sartori said. “I think the move is premature. Luxury is also about time. Our customer is willing to wait because he knows he will get quality in the end. What we need instead is to create a new format of the fashion show, one that is more in line with the customer.”

“We see a new generation of outerwear fabrics — ultralight yet compact in texture,” he said. “Some are high-twisted, which leaves them crispy and reactive but very supple,” citing Ricciarini, Beste and Tamurakoma as his top picks.

The designer welcomed the launch of Blossom, but noted that with the blurring seasons and tight deadlines he would prefer the whole show to be moved to July and December, deeming the current format outdated.

Weather was more directly taking a toll on business, as mild temperatures contributed to a weak winter season, noted Stefano Bellandi, export manager of Ricciarini. “We are feeling the impact,” Bellandi said. “Winter orders are coming in now and they are smaller compared to last year.”

Bellandi said he was hoping the new fashion week format would give “more energy to the market.”

Mario Ratti also lauded the upcoming switch to a show-now-buy-now model as a “big positive difference.” “I do think it will render sales more dynamic, but will flatten creativity. But for us, it’s fantastic, because it will also stop copy cats,” he said.

At Texworld and sister shows Apparel Sourcing, Avantex and Avanprint, held at Le Bourget for four days ending Thursday, Messe Frankfurt France ceo Michael Scherpe said, based on preliminary data, he estimated a decline of around 7 percent in attendance from last year’s 13,639.

“We expected a decline in visitors, as all the Paris trade shows are seeing because of the psychological impact of the recent terrorist attacks,” Scherpe said. “But buyers who have to come came, because they need to generate revenues. Exhibitors also feared a drop in business and that has not been the case.”

Mozart Tseng, president of Chinese Tencel specialist Mozartex, said, “It has been quiet but the quality of visitors has been good.”

Tseng nevertheless predicted a difficult year for 2016. He said, “At the moment, the economy is not good. Europeans are buying less because of the currency situation. We are lowering our margins to give more competitive prices. It will be a tough year, but hopefully 2017 will be better.”

Dilip Agarwal, director of embroidery specialist Indmoda Exports, said, “Some of our regular visitors came, but some were scared of coming to Paris.”

Popular items at Indmoda included fringed designs, priced at 25 euros, or $27.79 at current exchange, a meter, while an elaborate embroidered and beaded floral fabric priced at 70 euros, or $77.83, had been picked up by Marchesa, Agarwal said.

Buyers gave mixed reviews of the offer, which was divided into different product segments to be more apparent to visitors.

“We feel like it is really safe, with not much newness, and the colors are very dark for spring,” said Joshua Roberto Scacheri, a London-based senior designer for men’s wear specialist Bagir.

Amanda Cotton, a designer for F&F at Tesco, cited brisk business, although she said the currency situation was making it tougher to buy out of China, which represents nearly half of the exhibitors at Texworld. She had picked up samples of rough tweeds and suedette.

Denim mogul François Girbaud used Texworld as a platform to unveil a partnership with Pakistan-based Naveena Denim Ltd. A capsule collection of denim using Girbaud’s Wattwash laser treatment method, which uses light instead of water or chemicals to treat denim, will debut for fall 2017.

The first edition of Avanprint, a show within the show dedicated to digital printing, was active.

Apparel Sourcing, meanwhile, grew its exhibitor footprint around 30 percent to 230, with Morocco bringing a delegation of companies for the first time.

“We were apprehensive about coming because we thought the trade show format out of date, but we were pleasantly surprised to see all of the international players,” said Abderrahmane Atfi, ceo of Morocco-based firm MED Sourcing. “All of our clients were here, as well as many potential new customers looking to source closer to Europe.”