Suits, Shoes and Shirts to Travel In: Designing With Limitations, and Innovation

A curious type, Paul Smith has always been one for human interaction, and observation. That’s where he gets much of his inspiration. It’s why he works on the shop floor of his Albemarle Street store on a Saturday and why he still packs his bags and heads to France and Italy for the seasonal fabric fairs.

At the start of his career, he recalls traveling to County Donegal on the Atlantic coast of Northern Ireland. A young son had taken over the family fabric mill there, and he was willing to work in a different way for Smith.

“I went to visit the mill, which was in a Methodist church on a beach in Donegal, in a place called Downings. The phone number was ‘Downings, 3-2’ and when you rang it, it went through to a telephone exchange in somebody’s house. It was hilarious. And cows used to wander in on the beach into the mill,” recalled Smith.

Despite its humble situation, that mill delivered, and then some.

“I took things like a Donegal tweed, and later a Harris Tweed, that traditionally would have come in geography teacher colors like rust. I wanted them in lilac, dusty pink or lemon. The young man at the mill would make a tweed with lemon in it — or lilac. Eventually he did a tweed — in silk,” Smith added.

That passion for pushing limits, experimenting, investigating — and challenging traditional notions of clothing and textile making — has never dimmed. He discovered digital printing at a fabric fair, which led him to create his famous spaghetti print shirt, and scores of other items adorned with his and others’ photos.

“A lot of the ways I’ve created and developed things have been learnt by being a traveler, a cyclist and having worked at a mill in Yorkshire called Leigh Mills,” he said in his Covent Garden headquarters, where he’s surrounded by mounds of cycling jerseys.

“I get loads of cycling jerseys sent to me from around the world. Things like zip-tops and stripes have been influenced by my collection of cycling jerseys — and they’re very popular with the more unstructured suit,” he said, pointing to one of his most innovative products, A Suit to Travel In.

To date, the style has sold around 50,000 units, and was born from Smith’s desire to crisscross the world in a suit that wouldn’t crease, and that would be comfortable to move around in.

“One of the mills we work with actually does a line of fabrics for schoolchildren’s uniforms, which are made out of nasty stuff. The principle of nasty stuff is that it’s robust and doesn’t crease because they really mistreat their clothes,” Smith said.

By a nontraditional approach, the designer was able to create a lightweight, wrinkle-free travel suit, out of wool (not nasty stuff).

At the launch of the collection, the Olympic medal-winning gymnast Max Whitlock, who won a bronze in the pommel horse final at the 2012 London Olympics, put the suit through its paces in an energetic performance. 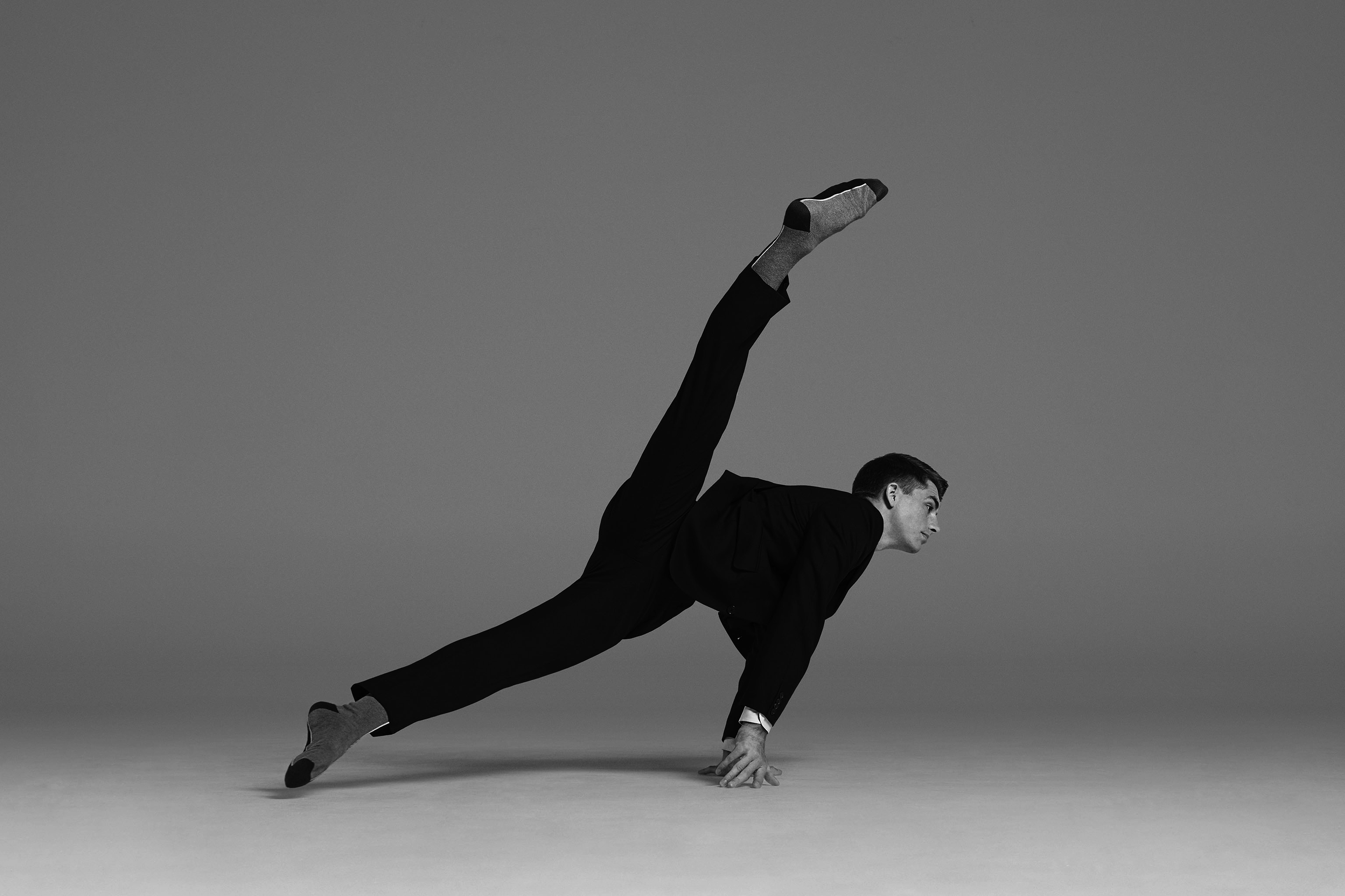 “If [the suit] can cope with what I do to it, it’s the perfect thing for men who travel a lot,” he said. There were also circus performers at the show who had the crowd in a thrall with their gravity-defying antics.

The travel suit has spawned no less than two iterations — an entirely machine washable suit, and a travel jacket made from knitted jersey, which has hidden zips for travel necessities.

“It’s all to do with the lack of interlining, or if you use interlining, it has to be compatible with the actual fabric,” Smith explained of his machine washable suit.

A Suit to Travel In was the latest in a long line of innovations aimed at making day-to-day life easier for customers.

When he first started designing his own collections he asked himself: “How can I make something that people would want to buy? How do you make a white shirt different than the Marks & Spencer’s white shirt?” he said.

That first white shirt was oversize with deep armholes, a smaller collar with a soft interlining, real mother of pearl buttons, and 22 stitches to the inch.

His first collection, which he showed from his microscopic hotel room in Paris, having sent handwritten invitations to buyers, featured oversize checked shirts with a small collar and a contrasting pattern to the front.

Smith was also talented at working around limitations: His early knits were skinny, not because he wanted to be cutting-edge, but because he had no choice.

“I had to persuade the factory to work for us, and they absolutely refused to do anything other than kid’s school sweaters, so I thought, ‘OK, I’ll make a trend for skinny sweaters.’ So if you look at pictures of David Bowie, Jimmy Page or Eric Clapton in a skinny sweater, those were all mine because, at the time, I couldn’t make anything normal-sized,” he said.

Smith was also one of the first designers to soften the suit. In the late Seventies and early Eighties, he was working as a freelance designer for The International Wool Secretariat, and “we got asked if there was something we could do to get young people in suits. So we just softened the construction of the suit and selected fabrics that wouldn’t have traditionally been used, like crepe fabrics and other lightweight fabrics,” he said.

He is now channeling his efforts into creating sustainable designs, with the brand recently creating a coat made out of recycled plastic water bottles.

“The main thing about sustainability is you can’t crack it completely, you just do your best. We have a new [shoe style] made from natural rubber because I was trying to work out how to make a shoe you can put on, and get it immediately comfortable. It’s a shoe to travel in,” Smith said, taking off his own shoe and folding it in half to demonstrate.

It’s a classic-looking brogue, but without the pain of breaking the shoe in. “It was always classic with a twist from the beginning,” the designer said.