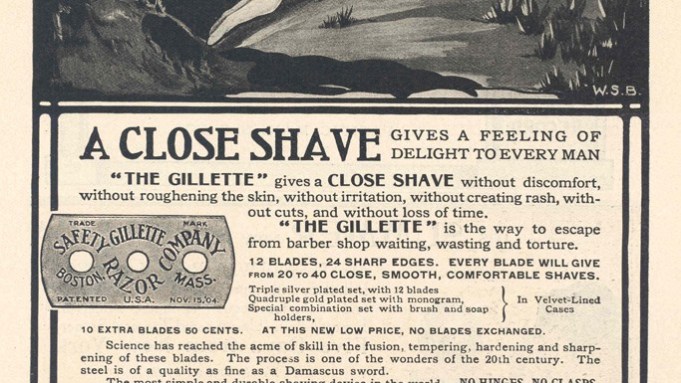 1915: The company introduces the first women’s razor, the MiLady Décolletté, packaged in a flowery feminine case and positioned as a tool for shaving under arms.

1917: The U.S. government requests Gillette supply razors and blades for the U.S. Armed Forces during World War I.

1957: The Gillette Adjustable Razor is the first to offer three settings for light, medium and heavy beards.

1971: The Trac II razor, billed as the first twin-blade system — for a closer shave with less nicks and cuts — rolls out.

1975: The brand introduces Daisy, a disposable shaving option for women.

1989: Featuring the first spring-mounted twin-blade technology, Sensor was designed to adjust to the curves of the face for a more comfortable shave.

1996: The Art of Shaving, founded by Manhattan-based couple Myriam Zaoui and Eric Malka, opens its first store in New York.

2001: Gillette launches Venus, billed as the first razor “designed for women and their bodies,” with three individually adjusting blades, a rounded, pivoting head and protective cushions to guard against cuts.

2005: Gillette launches the Gillette Fusion shaving system — the first to feature innovative technology both on the front and back of the blade cartridge, with a five-blade shaving surface and a precision trimmer on the back.

2012: Fusion ProGlide Styler, a 3-in-1 tool for men who style their facial hair, is introduced, combining trimming technology from Braun with Gillette blade technology.

2012: Venus + Olay rolls out, combining the close shave of a Venus razor with Olay moisture bars foregoing the need of a shaving cream. For this launch the brand becomes Sports Illustrated’s first beauty partner.

2012: P&G sponsors a team of 24 athletes from 18 countries to represent Gillette at the London Olympic Games.