His name is the ultimate reference in luxury equestrian wear and equipment. 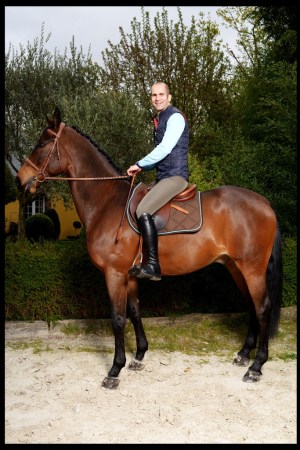 While his name is little known to the general public, among initiates, Pierre Guibert is the ultimate reference in luxury equestrian wear and equipment. This affable Toulousain, with his singsong southern accent, created his company in 1995 at the age of 27. “Everyone has the impression that the brand has a very long history,” he laughs. “In reality, I created it myself.”

Guibert has expanded via word of mouth, and from the brand’s discreet boutique on Paris’ Avenue Victor Hugo, he has expanded to open corners in London’s Harrods and Tokyo’s Mitsukoshi. Now he is in talks with U.S. retailers to carry his wares.

In the oak-clad Victor Hugo boutique, saddles and bridles are displayed on the ground floor alongside street and equestrian wear, leather goods, silk, and jewelry. Alongside its own brand, Guibert offers a selection from other specialists in the field. Downstairs is a more technical domain, where everything for the discerning equestrian can be found—the hoof grease, the brushes, the bits, the crops, and the most recent developments in technical clothing for horses.

Onthetelephone,Guibert apologizes profusely—he just acquired a new, camera-shy horse named Satin, putting his faithful July, who was suffering from arthritis, into retirement. Would we mind meeting him at the Ecurie Alric in Maisons-Laffitte, around 20 minutes outside the capital, run by his friend Philippe Alric, who keeps creatures more used to the limelight?

At the Maisons-Laffitte stables—founded by Frank Jay Gould in 1908—Guibert is in his element, praising the borrowed bay steed, Giabal, for his abilities as a model. When a fellow rider takes a kick from a mare, he makes sure she is accompanied for a checkup, where it turns out her arm was broken. “She is a great customer of ours,” he says, “and I know she wouldn’t make a fuss about nothing.”

Guibert rattles off the names of his clientele, which includes members of the Saudi royal family, LVMH’s Pierre-Yves Roussel, chef Alain Ducasse, and heirs to the Hermès empire. “That is my ultimate professional reference,” Guibert says proudly of the Hermès connection. In a world where only business counts, the much larger Hermès would be Guibert’s closest competitor.

Guibert was born to the horse business. His grandfather was a cavalier at the prestigious Cadre Noir in Saumur, and most of his family rides. Every day before heading to work, he rises at six to ride in the Bois de Boulogne. “It gives me a real breath of fresh air and makes me think differently,” he says. “If I didn’t have that, I would go mad.

“What I love about riding is the relationship with the horse that you build up over time, a singular complicity that creates a very strong link. Both in love and when it comes to horses, I don’t believe in passion—I believe in building a relationship over time.”

Guibert speaks with emotion of his own horses, which have all been bays. It pains him to be separated from July, his former mount whom he visits as often as possible in his retirement home and describes as “dominant, scared of nothing, unaffectionate but jealous.” His new horse, Satin, is “a fashion icon, more physically gifted but a lot more emotive, and very affectionate. We’re in the middle of getting to know each other.”

After a few years spent in the family property firm, Guibert decided to reconcile his passion for all things equestrian with his business acumen. Frustrated with the lack of quality riding equipment on the market, he created his own brand, using the finest leathers and building his own workshop. “The equestrian world migrated toward low-end products that did not last long and did not correspond with the beauty of the horse,” he explains. “I have always been passionate about raw materials. The sensuality of full-grain leather makes me swoon.”

From this starting point, he has built a business that as well as tack includes leather goods, silk scarves and ties, jewelry, and equestrian-inspired apparel. Leather products are produced by the company’s French work-shop using mainly cow and milk-fed veal skins, tanned for a year to improve their suppleness and durability. “We use the most expensive leather, costing between 100 and 120 euros [or $130 and $156 at current exchange] per square meter, compared with between 50 and 60 euros [$65 and $78] for most luxury brands,” Guibert says.

Some 60 percent of business now stems from nontechnical products, a share that has risen over the years. “When you buy a saddle or bridle that we have made, we will not see you again for ten years, so it’s logical that the accessories part has grown,” says Guibert.

He believes consumers are attracted to the quality of the materials and the discreet sense of luxury imparted by the brand. “The touch, the sensuality of the natural leather is seductive to them,” he says. “We are a saddle-maker. This operating model guides us in the creation of all of our products. Artifice has no place for a simple reason, because it does not exist in the equestrian world. On the bridle, there are various buckles, but they all have a purpose. When we make a bag, it is exactly the same. I will not put a buckle on it just because it is pretty.”