The Italian company, which strives to sustain growth through innovation, is gaining attention for its modern use of materials. 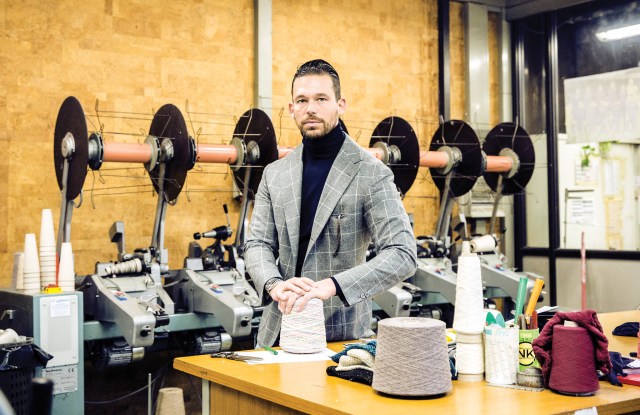 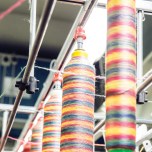 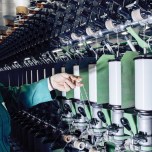 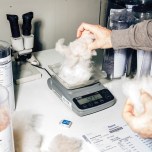 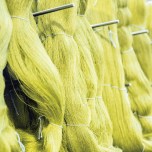 In a fashion world that’s rapidly embracing innovation and technology, it’s challenging to discern how much research and development is invested in every fiber of an ensemble.

This story first appeared in the January 20, 2016 issue of WWD. Subscribe Today.

In the yarn arena, microns — the diameter of an individual string of wool, or threads per inch of cotton — often trump creativity or color as deal breakers.

In Italy’s textile heartland, where Loro Piana and Cariaggi are yarn kingpins, Filpucci, a Tuscan mill known for its versatile wool threads, is garnering international attention as an innovator for its patented machinery that can push yarns to new dimensions. In the same vein, it’s also distinguishing itself as a purveyor of sustainable materials.

At last July’s edition of Pitti Filati, Filpucci introduced a cashmere line called “Re. Verso,” which uses a certified process that resurrects unused offcuts made available by top Italian and international fashion brands and producers.

Re. Verso is a branded platform developed by CLASS Eco Hub, a leading proponent of recycled yarns and fabrics. Among its partnerships, the organization has teamed with Filatura C4 for furnishings fabrics and Lanificio Stelloni for fashion textiles that were used in Gucci’s fall 2015 collection.

The partnership was also a way for Filpucci to certify its sustainable efforts. Many fashion players assert themselves as eco-friendly or sustainable, but the market is increasingly looking for a stamp of approval that guarantees products are responsibly treated and dyed.

“It’s like food — Filpucci is an exceptional chef, and in order to make something for high-end consumers, you have to do a beautiful job,” said Giusy Bettoni, founder of CLASS.

Filpucci has already made a name for itself in the sustainable realm for its Ninetyfive range of yarns — premium-quality and clean products that are doubly appealing to the high-end fashion market and responsible consumers.

“Sustainable materials have definitely been a focus for us, and over the past 10 years, they’ve been requested quite a bit by our U.S. and Northern European clients,” said Filpucci vice president Federico Gualtieri.

The 35-year-old son of the company’s founder, Gualtieri started at the company when he was 15, cataloguing yarns and working in the warehouse. In Italy, a nation mired in unemployment and a perpetual brain drain to more opportunity-rich lands, Gualtieri’s career path is somewhat of an anomaly — even for a family-run company.

When Gualtieri officially joined the company about 12 years ago, after studying economics, Filpucci only had two lines: summer and winter. Since then, besides his recent foray into eco-sustainability, he helped develop innovative yet still traditional lines — Woolen, Filpucci and Diffusion collections — serving all price ranges. Filpucci’s sales in 2015 rose 10 percent over 2014 to 40 million euros, or about $43.5 million.

“He is in love with new projects and he loves research,” Bettoni said. “His Ninetyfive line was his first real step into sustainability, and now Re. Verso was the next step. He takes ideas and cultivates them.”

Late last year, Filpucci inked a deal with Patagonia to supply the outdoor specialist with Re. Verso eco cashmere, which marks Patagonia’s push to market cashmere as a performance material.

The deal underscores the market’s appetite for natural fibers for activewear, rather than synthetics that in the past were preferred by top sportswear makers because they were more affordable options to wool. The return of wool in sportswear has also been fueled by consumer demand for more sustainable, biodegradable materials.

The move is also a part of Patagonia’s push to make high quality clothing and reduce its environmental impact.

“Wool has become finer and finer, and now we have treatments implemented in the finishing process that allow wool to be softer than it once was,” said Fabrizio Servente, global strategy adviser for The Woolmark Co.

Despite Gualtieri’s success in the field of sustainability, he is hesitant to tout the Filpucci name as one synonymous with “re” or “up”-cycled.

“It’s risky,” he said. “If you don’t market yourself well, it can sound like you’re selling trash. Our main business will always be cashmere,” adding that it is also difficult to certify that the entire production line of a mill is sustainable.

At the upcoming Pitti Filati fair on Jan. 27 to 29, the company will promote its expanded range of organic and nonorganic cotton. But in July, Filpucci plans to expand its Re. Verso line.

Today, Gualtieri explained, weight and diameter are more important than ever. The machines are modified every year and updated with new components. Filpucci invested about 1 million euros in 2015 in research and development for machinery.

“Color is the last thing we think about these days,” Federico said.

A lot has changed since Filpucci was started by Federico’s father, Leandro, in 1967, around the same time knitwear maker Benetton came on the scene. A child of World War II, Leandro lost his father as a young boy and grew up in extreme poverty. He went to work in a local wool mill and began specializing in machinery.

Like his son, Leandro had new ideas and began making bouclé and frisée yarn, whimsical accents that at the time were considered groundbreaking.

The younger Gualtieri looks at fashion week and sees his innovations on the runway and marvels with the same pride his father did in the late Sixties.

“Our contribution is very important,” Gualtieri added. “It’s funny….When I look at the high-end fashion shows where we are present, I realize how small we are and how important we are at the same time.”