Pitti Filati Gets Loud on Sustainability

Italian spinners banked on sustainable yarns to navigate the complex moment of the industry, affected by socio-political and environmental situations.

FLORENCE — “And if designers are not moved by a suffering planet, who should be?” read one of the more than 100 textile panels showcased in the trend area of Pitti Filati’s latest edition, which ended here on Jan. 24.

Staged at the Fortezza da Basso location, the 86th iteration of the three-day Florentine textile trade show got loud on sustainability, a theme that has represented international spinners’ refrain during the past few years yet reached a new high this season.

In particular, the trade show and its 136 exhibitors — up 14 percent compared to last year — got vocal on the topic, with organizers underscoring the urgency for action via colorful installations running through the central part of the venue and spinners presenting their latest efforts in fighting for the green cause.

In the former case, a series of panels juxtaposing drawings and textile flags developed with the mills displayed several slogans recalling the ones promoted by Greta Thunberg and her youthful army marching during the “Fridays for Future” demonstrations. Phrases such as “Buy more local,” “Eco not ego,” “Respect Mother Nature” and “Act now,” among many others, were written in bold letters. 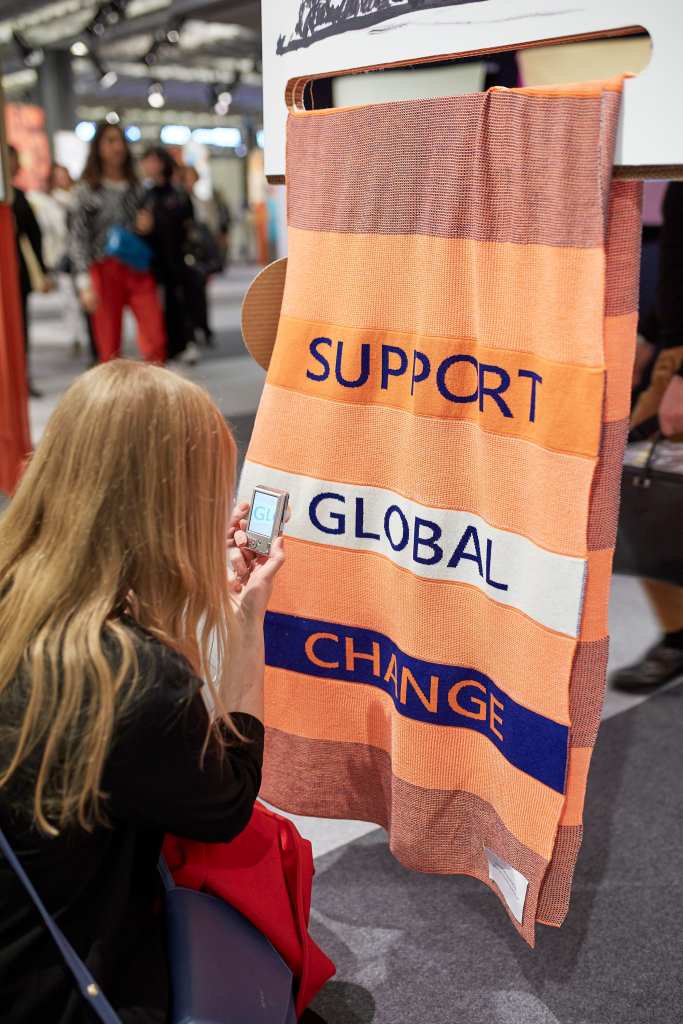 One of the panels installed throughout Fortezza da Basso during Pitti Filati.

The trend area reiterated the concept with an installation dubbed “Yarns United,” which mirrored Pitti Immagine’s overall seasonal theme about flags. Divided into six themes, the space included an ONG section that showcased the latest yarns and textile innovations under the form of flags urging action to save the planet.

Exhibitors’ commitment ranged from developing sustainable products made of recycled fibers to promoting production processes with low impact on the environment. Trend-wise, overall the spinners’ spring 2021 collections were permeated by a sense of simplicity and return to handwork, with thin, lightweight fabrics and noble fibers dominating their offerings.

Many spinners opted for blends of cashmere, mohair and wool with silk, cotton and linen, often organic or recycled, in earthy colors and neutrals while the boldest collections were defined by primary shades and micro patterns.

To infuse optimism and a hint of glamour, glimmering yarns also appeared in some booths, often referencing the iridescent and liquid surfaces of the oceans. For instance, Tollegno 1900 showcased the new Harmony Bright Wool, blending wool with a transparent yarn for a slightly metallic nuance, while Cariaggi presented the Mistral yarn blending cashmere with certified linen and the Fullmoon thread, adding Lurex to a cashmere and silk mix for a luminous effect. Lanificio dell’Olivo’s Special Bright line included certified polyester yarns obtained from recycled plastic bottles, while Filpucci’s new Lumen yarn was made of 100 percent Tencel, which is derived from renewable wood sources. 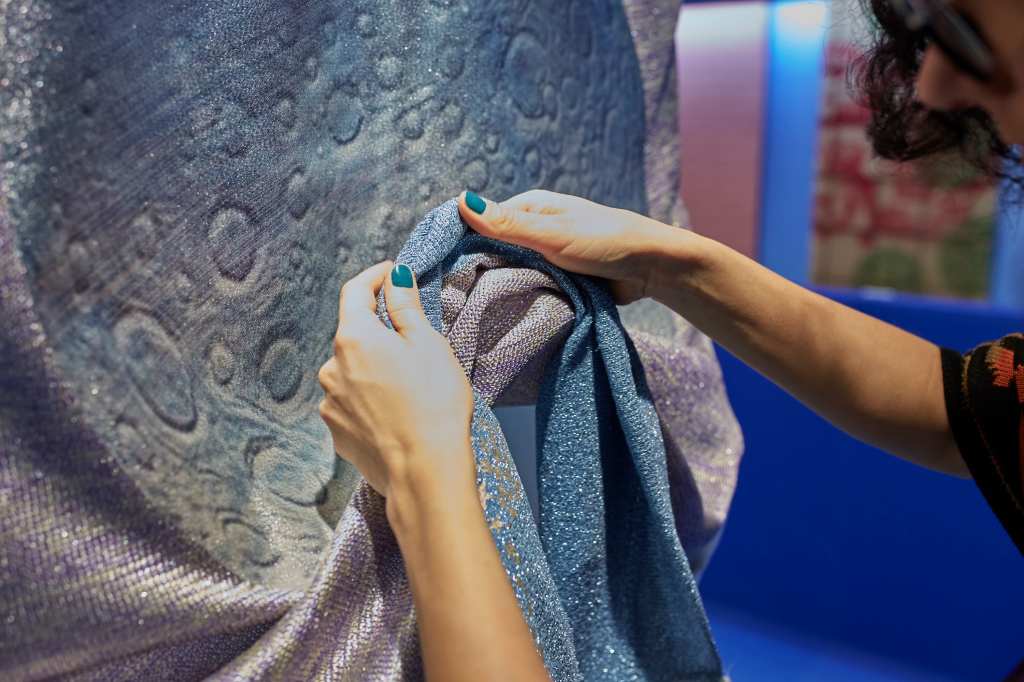 For Italian spinners, sustainability has become the key asset to appeal to buyers — this season the trade show attracted 4,400 visitors — and navigate the complex moment the industry is facing, which is widely affected by the instability of socio-political situations.

“I’m not a pessimist, but we have to consider many aspects today, the situation is complicated for sure,” said Botto Giuseppe’s chief executive officer Silvio Botto Poala. “The trade war between the U.S. and China calmed down, but now there’s the possible impeachment of Trump and the future elections in the U.S. as well as the slowdown of consumption in China, which is a structural fact after many years of growth, but it might highly affect the business,” he said.

“And let’s not forget this new virus and the impact it might have. Will Chinese people be blocked or continue to travel?” added Botto Poala, weighing the consequences of the recent coronavirus crisis.

Monitoring the situation in these two countries is key for the executive, considering these are among the best-performing markets for Botto Giuseppe, whose sales were flat at 63 million euros in 2019 compared to the previous years. In particular, “China is relevant for its obvious market dimension and increasing demand of yarns and textiles, while the American buyers proved to be the most demanding in terms of sustainability and therefore have been the most receptive of our offering,” explained Botto Poala, forecasting an even better performance in the market due to “clients that have tried our sustainable yarns and might increase the volumes of their orders this year.”

Sustainability has been at the core of Botto Giuseppe’s strategy for many years, with the executive underscoring that the future of the company will be all about evolving this more and more and pursuing new certifications to prove the firm’s efforts. This season Botto Giuseppe expanded its distinctive Naturalis Fibra line with new blends of wool, silk and cashmere and received the RWS — Responsible Wool Standard — certification for all its products.

The company’s future performance might also be affected by the recent tragic fires in Australia, as Botto Giuseppe sources raw materials from sustainable partners’ farms in the region, in addition to China and New Zealand.

“Luckily our farms have not been involved in the fires, but the consequences are here to stay. The fires have caused dryness and many issues linked to purveyance, which will cause an increase in costs and maybe even logistics difficulties. Plus, it will affect the quality of wool, as well as the quantities, that might decrease. Overall the price for wool, that has been surging for two years, will remain as high,” he explained.

Lincoln Germanetti, ceo of Tollegno Holding — comprising Tollegno 1900 SpA and Manifattura di Valduggia SpA — shared Botto Poala’s concerns over the Australian situation, underscoring that “the dryness is changing the whole ecosystem there.” The company is a leader in terms of woolen yarns and Germanetti listed the yo-yo effect of wool prices among the many critical issues of the moment.

Nevertheless the executive was satisfied with the company’s performance in 2019, but declined to share sales figures as consolidated financial results will be available only in spring. “We’re lucky because our business is equally divided among the European market, the U.S. and Asia, mainly South Korea and Japan. Yet what’s happening in China concerns us, even if only indirectly, as our American clients work with China,” he noted.

“Evolution” was a key word in Tollegno 1900’s strategy for this year. This season the company decided to rationalize its collection by keeping its most distinctive references, working to implement new variations and improve the performances of its signature yarns.

Case in point, the firm’s Harmony 4.0 wool yarn family was expanded to introduce the new Harmony 4.0 Silk blend of merino wool and silk. The whole line is known to combine performance and functionality because of four innovative treatments, including the Compact process making each yarn more resistant; the Eco Idro one making it waterproof, and the High Twist treatment intensifying the wringing to prevent fibers from pilling. 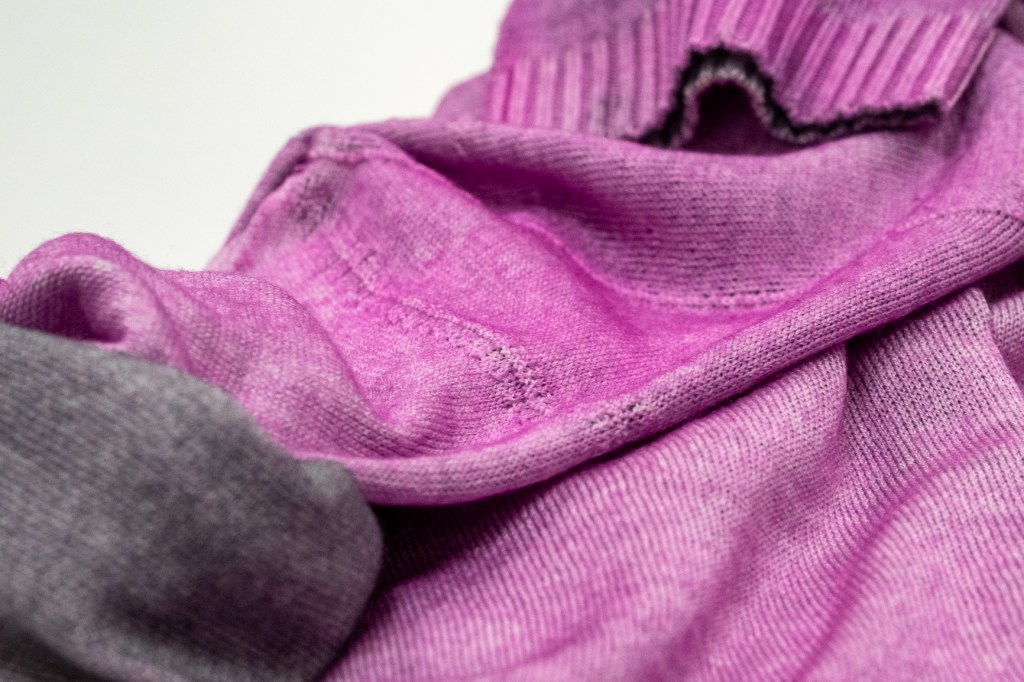 Sustainability is also at the core of Cariaggi’s business, as the Italian spinner has been developing an upscale range of 100 percent organic cashmere yarns for four years and improving its Systema Naturae line, first presented to clients in 2016 but conceived back in 2006. The range includes natural yarns dyed only with pigments extracted from plants, including fever tree and woad.

“There are dedicated machineries for this kind of dyeing process and we continue to invest in the project, although the market for this type of offering is still very, very little,” said the Cagli, Italy-based yarn maker’s managing director Cristian Cariaggi.

Yet this didn’t dent the company’s sales, which totaled 106 million euros in 2019, registering a 5 percent increase compared to the previous year. According to Cariaggi, this was due to the firm’s shift toward an increasingly luxury offer hinged on noble fibers such as cashmere and vicuña that has met the demands of fashion brands’ higher positioning.

In particular, the company grew in the U.S. and Italy, where sales increased 3.5 percent and 5.5 percent, respectively, while revenues jumped 31.3 percent in the U.K. “We didn’t noticed any problem related to Brexit, but of course we will have to see how the situation will evolve there,” said Cariaggi, who forecast a positive performance for the business also in 2020.

“We can survive, despite everything, also because it’s not just about a single geo-political situation, but a widespread instability. And that’s happening for a couple of years, now,” echoed Filpucci’s president Federico Gualtieri, adding that “instability can open to new opportunities, too.”

In 2019, the company totaled 38.5 million euros in sales, registering an 18 percent increase compared to the previous year. The U.S., Italy and France were still the best-performing markets for the firm.

“We invested a lot in sustainability and now the interest for the topic among clients reached a peak, but there’s still some lack of culture and understanding behind what’s really sustainable,” noted Gualtieri.

In addition to showcasing a collection whose fibers were 75 percent sustainable, this season Filpucci decided to up its commitment and engage final customers by introducing the Re.Verso Take Back program. The project invites consumers to take their castoff cashmere or wool garments to the stores of brands joining the initiative to trigger a traceable production cycle managed by the Re.Verso system, which will first turn the pieces into recycled yarns and then into new garments. 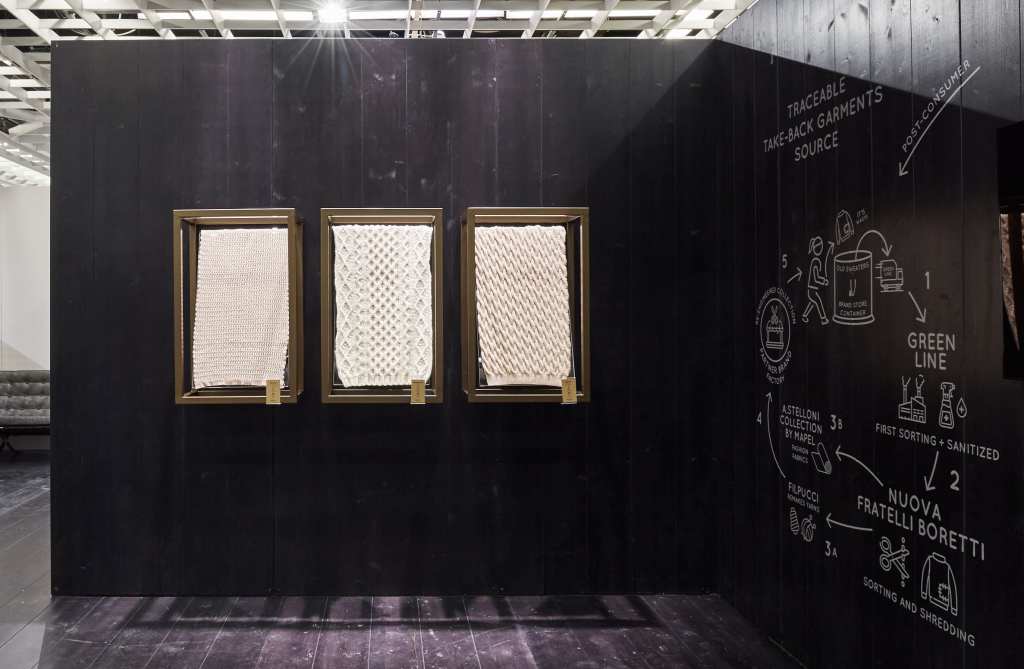 The area dedicated to the new the Re.Verso Take Back program showcased at Filpucci’s stand.  Courtesy Photo

Montirone, Italy-based company Monticolor also went down the sustainable route, unveiling the FeelFine yarn made by pill-free organic cotton obtained through a particular Hairless spinning technique that improves its qualities, making it thinner.

“Sustainability now is a must, but let’s not forget that we have the duty to do beautiful yarns first, which is not something to take for granted. If these are also sustainable, that’s even better for clients,” said Lanificio dell’Olivo’s general director Fabio Campana.

The company’s revenues were flat at 20 million euros in 2019, “but we have to consider we had an incredible year in 2018,” said the executive, pointing to the 15 percent increase registered that year versus 2017. “For us it was important to consolidate that growth, but we have to admit the market is not in its best shape now, especially in the Northern hemisphere. And the increasing price of noble fibers, such as mohair that is key for us, doesn’t help either,” he said.

“Of course the industry is going through a not-so-brilliant phase: there are evident variables linked to the resourcing of raw materials, critical issues on exportation in certain markets but we noticed in all exhibitors the will to face the difficulties the best way possible,” concluded Raffaello Napoleone, ceo of the trade show’s organizer Pitti Immagine.