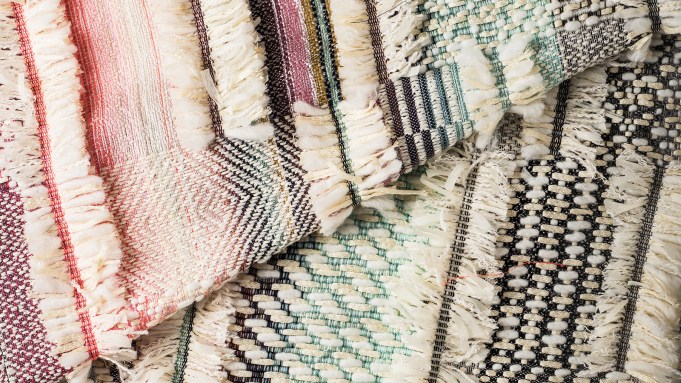 It’s back to basics for the upcoming edition of Première Vision Paris.

In a context of political and economic instability, a contrasted global panorama for clothing consumption and the slowing of once-glittering emerging markets, PV managing director Gilles Lasbordes said a number of mills are seeking to reinforce ties with established markets.

“Our mills were trying to find new markets, going to China, Russia, Brazil….With the changing situations, they are going back to developed countries like the U.S.,” said Lasbordes during preparation for the show, slated to run Sept. 13 to 15 at the Parc d’Expositions in Nord Villepinte.

Registrations to date show a 1.3 percent dip in exhibitor numbers versus the year-ago edition to 1,898.

All things considered, the mood among exhibitors is “not so morose,” Lasbordes said. “Mills that made it through the major economic crises of 2008 and 2009 have learned to adapt their processes and collections to the market. We feel that, in our shows, Paris is doing well; it’s quite strong, even with the situation with the [terrorist] attacks.”

Première Vision New York saw a record number of exhibitors, he confirmed, “with the euro-dollar exchange rates giving new opportunities for our companies to export in better conditions. They are more competitive.”

According to a report conducted by the Institut Français de la Mode for Première Vision Paris, whereas in the U.S. clothing consumption in specialized stores in the first four months of 2016 grew 1.9 percent in value, consumption is still declining in several European countries. In France, clothing consumption during the January-to-May period fell 1.6 percent in value versus the equivalent year-ago period, impacted by a tense social climate and unfavorable weather conditions for the spring deliveries.

While it is too early to assess the true impact of Britain’s Brexit vote, the immediate impact has been a decline in the exchange rate of the pound that will undoubtedly weigh on the competitiveness of European exports, organizers said. The U.K. accounted for 5 percent of France’s textile exports in 2015 and ranks fourth in exhibitors at Première Vision Paris, with 141 mills confirmed for the show.

Aiming to consolidate its position as a leading observatory for upstream fashion businesses, Première Vision Paris, as part of the IFM-Première Vision Chair for “The Economics of Creative Materials for Fashion” created in January, at its September edition will present the first annual Première Vision-IFM barometer, described by Lasbordes as an index of the activity of the textiles and leather segments of the Première Vision Paris’ mills.

“The idea is not only to be talking about fashion and the mood of the season, but also to speak about the economy, the business of textiles,” he said. “At Première Vision Paris, our DNA is the creative part of the industry and the idea of the share is to unveil an index of the activity of our industry, meaning that you can compare the activity of our mills to the general market.”

The fair will feature 139 new companies across various sectors. They include South Africa’s Hinterveld, a boutique weaving mill with industrial capabilities specializing in premium natural fibers such as mohair, wool, silk, linen and alpaca; China’s Dehong International Cashmere, a specialist in high-end cashmere worsted fabrics that are made using independent research and development from Italy and South Korea and advanced machinery from France, Italy and Germany, and America’s 22 Print Studio, which will present a collection of vintage and antique garments, accessories and documents that include prints, embroideries, beadings and laces.

Among innovations to be presented, Debs will introduce a range of AirDye fabrics, where both sides of the fabric are dyed simultaneously, spanning lustrous interlock, heavy twills and a shape memory grosgrain. Highlights at Sfate & Combier will include a velvet-effect fil coupé on a chiffon ground and a textured cloqué and printed jacquard.

Among the lace mills, Darquer’s offer will include wool-coated winter laces in soot black, as well as laces printed with tartans and camouflages, floral tapestries and arabesques. Sophie Hallette’s offer will range from a high-gloss angora lace with raised motifs to an elaborate hand-embroidered cotton lace in a clover motif.

Lasbordes said the fair will continue its focus on “smart creation” with an area displaying products around a water theme.

Novelties presented by CLASS, the Milan-based eco-smart resource hub, will include Ecotec, a smart cotton by Marchi & Fildi that transforms remnants from garment production into yarns, and Re.Verso Baby Camel, a delicate yarn made from garment scraps collected,