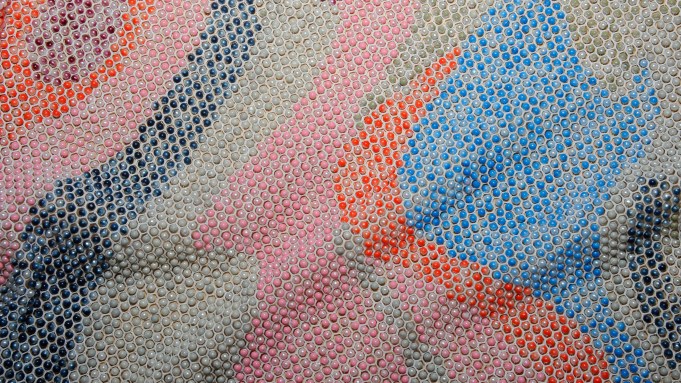 PARIS — Business is tough, and attendance may have thinned, but the key decision makers came.

That was the conclusion of Gilles Lasbordes, managing director of the Première Vision Paris trade show which saw an 8.8 percent drop in visitors versus last year’s show but a 2.7 percent uptick versus the February edition.

“We still received almost 57,000 visitors in three days, which makes us by far the biggest show in the sector,” he said of the three-day event, which wrapped on Sept. 15.

Political tensions, security threats, weaker growth in emerging countries such as China, Brazil and Russia and a global downturn in consumption of textiles and leather goods continue to affect business — but the news isn’t all bad. The results of the first annual Première Vision-IFM barometer, based on business in 2015, showed that creativity rules, with the fair’s textiles and leather exhibitors outperforming the general market.

Exhibitors located in mature economies like Europe, the U.S. and Japan, saw a 1.6 percent increase in production versus 2014, a figure that, according to the report, “largely surpassed” the United Nations benchmark, which registered a decline of 1.1 percent.

The creative leather and fur market registered a 3.9 percent increase in volume, which “corresponds to a much stronger growth than that observed by the world production index, which showed a slight increase of 0.9 percent.”

But as the industry adjusts to what Lasbordes described as “a galaxy of various processes, product developments and agendas” — such as the recent see-now-buy-now phenomenon — can creativity continue to thrive?

“I don’t think there are any strong trends this time because of the way the world is today,” mused designer Paul Smith upon leaving the booth of Abraham Moon & Sons, one of Britain’s last remaining vertical woollen mills. “[All the mills are] proposing huge collections — from archives to current — hoping it can fit into what’s in designers’ minds.”

“Everybody is doing it their own way, so organizing collections becomes difficult for the fabric producers who supply them. They need to have a structure that reacts quickly, with large amounts of stock, which means there’s not necessarily the same level of research,” commented Mario Ratti, director of silk specialist Ratti, which is part of Marzotto Group, Europe’s biggest textile manufacturer. Among new directions, the mill had experimented with “coating and bonding to create strange effects,” like bonded and needle-punched nylon.

“[See-now-by-now] collections are more driven by merchandisers and buyers, so the creativity is reduced and if you’re buying far in advance, there’s the risk of it feeling flat, there’s not the fresh energy of the moment,” he added. “Burberry buys a long time in advance, they buy huge quantities but if the collection changes, they throw everything away. Or there are brands like Prada who force you to produce in a very short time. The lead time used to be six weeks, now it’s two weeks.”

“We saw a lot of checks and stripes in different textures and rusty colors. A lot of hairy surfaces and shiny, satiny kind of fabrics,” echoed Behnaz Aram, concept designer at & Other Stories.

“The fabrics are, for some reason, getting heavier but very interesting, with new finishings,” said Andrew Gn. “Old techniques but new vision.”

Among trends from the British mills, presented in the U.K. Fashion and Textile Association booth, textile consultant Beryl Gibson highlighted: “Discreet bling where you’ve got bolder colorations on a slightly bigger scale and slightly kind of vintage, flannelized dusty look” as well as “Rich darks — mysterious dark-on-darks that don’t look dowdy, that have a vividness. I know it’s an oxymoron, but we haven’t had that for seasons and seasons.”

In the mood for color, designer Oliver Spencer was on the hunt for corduroys and velvets, saying: “I loved the navys, pinks and rich forest tones. You should feel warmth from the color, it should come over you like a glow.”

The ath-leisure trend continues to exert its influence in a major way, with a focus on function and performance.

“The final customer is getting used to the special attitude of high-performing fabrics. Function, comfort, fabrics that dry while you’re using them or are stain resistant….It’s also the case for the shoes, the biggest novelties are in the activewear shoes,” said Debora Sinibaldi, a knit designer for Christian Dior who was on the PV Awards jury.

“The traditional tailoring element has its place, for me sportswear and streetwear will be the predominant force in growth for heritage fabrics like Harris Tweed,” said Mark Hogarth, creative director at Harris Tweed Hebrides which has a partnership with an “American super brand” in the works. The mill introduced 10 extra yarn colors — a completely new color spectrum, with some really interesting blues and fauns — made traditionally without using CAD. “It’s to bring back the designs made famous in the Fifties by the classic sports jacket. But what we’re hoping is this colorway gets picked up for streetwear, we’re seeing big potential growth in streetwear — bomber jackets, male and female.”

“I’ve had a lot of interest for the sportier things I’ve done — new materials — things that have been bonded and things I’ve almost destroyed,” said Martin Bonney, a specialist in embroidery, mixed media and textiles who was showing as part of the U.K.-based mentoring program, Texprint. His “re-engineered camouflage” attracted a lot of interest. “Rather than printing and using lots of chemicals, it’s about etching and taking away from the surface.”

Ratti presented a waterproof 100-percent silk that’s suitable for runners. “The idea is to bring fiber to a new category,” Ratti said.

Marlane, also part of Marzotto Group, presented a men’s suiting performance wool in collaboration with Cordura. “In formalwear there are many things we need to change, we need innovation,” said export manager Gianfranco Fiori. “It will either take off or it won’t, we’ll see in six months’ time.”

Schoeller Textil showcased a “mountaineering-strength” polyamide and elastane-based material with a bio-based water repellent finish destined for what spokeswoman Dagmar Signer described as “a new area of clothing targeting the work/life balance.” She cited growing demand for shine, adding: “We think golden tones will be big.”

Toray’s novelties included the hybrid, nonwoven Ultrasuede Nu Napa with a leather aspect but suedelike touch that is machine washable. Popular with emerging and established Japanese brands alike, like Junya Watanabe, Issey Miyake, Support Surface and Class, the company is looking to promote the material in the European market, which it entered three years ago.

The show’s new area, Smart Creation Square, hosted by Giusy Bettoni, founding president of CLASS, the Milan-based eco-smart resource hub, presented a series of discussions about best practice. Giuseppe Miroglio, chairman of Miroglio Group, a guest speaker on the subject of Water Preciousness & Innovation, discussed new planet-friendly approaches to printing. “Our idea is to get to a printing process that is completely water free,” he said. “We are also working actively to reduce the chemicals we use in the process and signed a protocol with Greenpeace, the Detox Protocol. We are investing a lot in all the different parts of the process to reduce digital chemicals, in renewable and recycling.”

Many commented on the show’s increasingly global dimension, meanwhile.

“The Chinese and Turks are becoming more and more sophisticated, it’s quite amazing,” Gn said. “They used to present some jean fabrics and silk, now it’s, like, woven, textured, embellished, brushed — it goes on. China and Turkey are catching up with European techniques, so most probably I’ll start working with them.”

“It was a very global year, very interesting in terms of new technology but also deep relationships with tradition,” said Olivier Gabet, director of Paris’s Musée des Arts Décoratifs, who chaired the PV Awards jury. Indian mill Ventures scooped the Grand Jury Prize for its innovative design based on hanging hand-painted pearls suspended on a tulle mesh, with Turkey’s Anil Tannery winning the Imagination Prize in the leather category.

“It’s very humbling, it puts India onto a level where innovation and creativity are now associated with the country as well,” said Ayush Murarka, head of designer exports for the company that works with the likes of Balenciaga, Dries Van Noten, Saint Laurent and Victoria Beckham. “We’ve always been known as a manufacturing destination but never from a creative perspective. What you see here is a piece of art that has been created in India.”