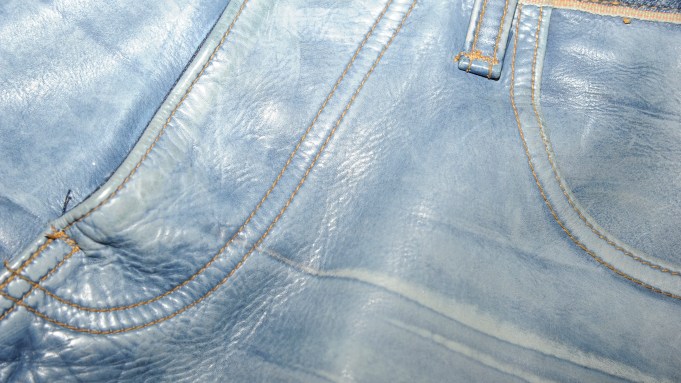 PARIS — While sustainability has made major inroads in the textile industry in the last few years, the apparel sector has been somewhat slower to embrace the trend.

This is about to change. At Prèmiere Vision Paris, which ended its three-day run here on Thursday, firms were on a mission that is likely to shake up the industry.

“Without sustainability, there is no future,” said Carlo Capasa, chief executive officer of the Camera della Moda.

Capasa said he gathered a group of 10 Italian fashion brands ready to adopt a new standard that obliges them to only use fabrics with a minimum level of chemicals in them, in a joint effort to reduce the industry’s ecological footprint. The list, containing more than 500 chemical substances, is to be released next month and be signed by Gucci, Prada, Valentino, Armani, Zegna, Ferragamo, OTB, Staff International, Loro Piana and Gianni Versace.

“These are big brands,” he said. “They will send a strong signal to the market.”

Yet the executive made no bones about the challenges ahead. Some colors would not be possible anymore, he asserted, research would be needed to find substitutes for those hazardous materials and that would require exchanging some proprietary information.

“This is a win-win situation for everybody, also outside of Europe,” Capasa said. “Others will have to follow, otherwise they will be left out.”

There was clearly no shortage of novelties in the green technologies department at the fair’s fall edition, with many brands presenting the fruits of their research for the first time.

Italian eco-leather specialist Okinawa attracted buyers with its “denim leather,” a laser-finished skin that looks like denim, is washable and vegetable tanned instead of using materials such as chrome in the tanning process. The material’s indigo blue color is derived from woad, a plant favored by painter Leonardo da Vinci in the Renaissance, also referred to as “the blue gold.”

“The more you wash it, the more it ages and color-shifts like real denim,” said Michele Ruffin, the firm’s founder, who supplies his vegetable dyes to companies that include Stefano Pilati at Zegna.

Rome-based Ligneah has set out to make leatherlike materials from wood.

“All wood we take comes from a managed forest and we replant 350 percent more than we consume,” said Adriano Pistola, in charge of the firm’s business development, about the patented material, which is laser-engraved, bonded with cotton or another natural material and coated with water gel for a leatherlike finish. “We also use a dry process to work it, so there is zero consumption of water.”

Luca Breschi, executive vice president of Olmetex, drew buyers with a new water-repellent fabric, just in time for the new manifesto. “It’s PFC-free,” he said of the chemical-free fabric made of intricately twisted cotton yarns, modeled after Inuit clothing.

Betting on sustainability can be lucrative, most exhibitors observed.

Gunnsteinn Björnsson, general manager of Atlantic Leather, said his company’s sustainability efforts are like a bonus that helps even out volatilities in the market.

“Big markets like Russia are closed and leather sales are pointing down,” he said, “yet we are in a similar place as last year.”

He noted that it is mostly the “new generation” of designers that has developed a taste for his fish-skin leather, which ranges from elegant salmon to freckled wolfish. He said, “We take waste from the fish factories in Iceland that would otherwise end up in the bin and are turning it into leather. And we use green energy because there is nothing else in Iceland.”

This season, the company introduced a new tanning process based on mimosa and tree bark for a natural finish.

Bigger players such as Ratti, which in 2014 logged 100.5 million euros, or $133.6 million at average exchange for the period, in sales, are looking to go green, too.

“We are investing a couple of million euros just to fulfill the requests of the luxury fashion groups, because they are asking for it. They cannot afford to have a supply chain that doesn’t meet those requirements. And so by 2016, we will be fully certified,” said Mario Ratti.

Sales in the men’s wear division, which he oversees, are up 20 percent versus last year.

Sergio Tamborini, chief executive officer of the Marzotto Group, said while business for wool was soaring, “the market as such remains under pressure.”

“We are not directly affected by China, but Russia, yes, because that market is more important for Italian luxury brands,” he said, noting that the fallout could in part be substituted by a buoyant U.S. “Total exports of Italian fabrics to the U.S. stood at about 175 million euros in 2014 [$232.8 million] — 35 million euros [$46.6 million], or roughly 20 percent, came from our group. The currency surely helps. But we cannot hope that the U.S. is the solution for everything.”

Tamborini was equally cautious about the chemical standards agreement. He said, “Sustainability is a big opportunity for a group like Marzotto. We are investing about 2 percent of our turnover, which in 2014 stood at 445 million euros [$591.9 million], in the area, but we need to see what it means in the real world. If we cut all producers that use certain substances and do not respect their workers, we will need to increase prices, for instance. I don’t think the chain is prepared for that. However, if it works, it will be perfect.”

Caroline Rush, ceo of the British Fashion Council, said, “If [the standard] works, then potentially [we will employ it]. If not, then our job will be to challenge it and make it work for the international community…I think bringing together the wealth of information and get people to share knowledge is a good starting point.”

Simon Hjalte of Tärnsjö, the Swedish tannery and saddlery that has been supplying its premium organic leather to brands such as H&M’s Conscious collection and Hermès, said: “What I can tell you is that the discrepancy between those people who say they are willing to pay for a sustainable product and those who actually are paying the extra dollars is getting smaller. It’s a good time for leather and sustainability. But they are not just buying because it’s organic, but because it has a certain quality.”

The firms’ ecological efforts have one strong ally — the designers themselves.

“I have never seen so many interesting new colors,” said Alessandro Sartori about the range of natural dying techniques. “It’s hard to define what these are. They look somewhat faded, as if they were burned by the sun, instead of washed.”

Erdem Moralioglu, spotted at historical French lace-maker Sophie Hallette, marveled at the natural quality of things: “What you see here has such a beautiful human hand,” whereas Georgia Beavis, senior women’s wear designer of Nicole Farhi, observed: “For us, it’s about surface and structure. We are looking for heavily milled fabrics — boiled or washed, even for our tailoring.”

Visitors at PV edged down 1 percent to 61,664, with 74 percent from Europe. Despite an economic slowdown, visitors from China were up 17 percent, while Russian visitors were down 13 percent.

Sustainability was also a key theme at Texworld, held at Le Bourget for four days ending Sept. 17, with several conferences on the subject and a sustainable sourcing itinerary.

Nevertheless, show organizer Messe Frankfurt France’s chief executive officer Michael Scherpe was skeptical about the introduction of yet another eco-standard in the industry.

“There are many guidelines,” he said. “Nobody is yet in agreement as to the best means of doing things. Perhaps one day, but I don’t know whether it can be the result of private initiatives or whether it must come from the state.”

Most exhibitors said they have already integrated eco-criteria such as limiting waste and reducing water, chemical and energy use into their supply chain, and see it as essential in today’s market, despite not being able to command higher prices for sustainably produced fabrics.

“If the mill is not sustainable, it is very difficult to survive,” said Wajahat Zafar, regional manager of marketing and sales at Pakistan-based denim producer Kassim.

But the main concern at Texworld was slow traffic on the show floor. “The spread of client visits was very low, we have seen no new entries, just existing clients,” said Abhishek Jain, deputy general manager of brands and retailers at viscose producer Grasim.

Exhibitors and visitors also expressed concern about the economic situation in China, which is putting downward pressure on prices.

“Because the [yuan] has fallen, our customers are saying their fabric should be cheaper,” said Steve Pardoe, sales and design director of U.K. design and sourcing firm Dewhirst’s Buzzbrands division.

He said Chinese suppliers have taken this into account and lowered prices, but there are concerns that prices will go up again.

Mozart Tseng, president of Mozartex, a large supplier of fabrics made with Lenzing’s Tencel fiber, is feeling the effects of the Chinese downturn, with its sales down 5 percent so far this year. The company is investing in innovation to counter the weak economy and has introduced new products like digitally printed Tencel.

“[Customers] like it, but it is always about price competition,” he said. “They need time to understand it can replace silk or cupra.”

Nevertheless, several exhibitors stressed that 2015 has been a strong year for them so far, with sales increases of up to 15 percent.

One of these was Turkish jacquard mill Arasan Tekstil, where marketing manager Inci Durmus said the company had seen brisk business at the event. Particularly popular was a polyester, cotton and Lurex blend jacquard with an Aztec pattern.

Three-dimensional surfaces and textures in all forms and variations were trending at Première Vision Paris.

Velvets and plush: Shiny classic velvet from Redaelli’s Angelica line was in high demand, as was the brand’s proposal of plush qualities featuring longer fibers from viscose and cotton with a savory touch.

Felted jacquard: Returning to the fair was British silk weaver Vanners, who brought a suitcase full of silk jacquards, some of which were felted, others were playing up contrasts between matte and shine, as the company is looking to meet men’s wear brands’ growing appetite for fancier fabrics.