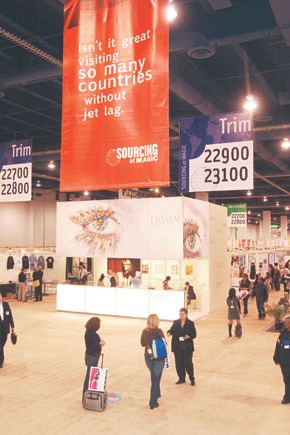 More than 700 exhibitors from some 30 countries exhibited at Sourcing at MAGIC, while eight exhibitors representing 15 lines participated at Printsource at MAGIC. Both fairs were held at the Las Vegas Convention Center. ASAP Global Sourcing Show at the Venetian Hotel hosted about 30 exhibitors.

To gain a competitive edge, companies from Peru and Africa advertised their duty-free status for importing goods into the U.S. Still, rivals from Bangladesh reminded visitors that they, too, have duty-free status in Europe and Canada.

India’s Manisha Exports looked to entice price-conscious customers with the possibility of replacing expensive silk for a more economical silk blend in the scarves, bags and other items that it embroiders. S.K. Modi, director of Manisha Exports, said he also tries to convince customers to increase the quantities in the orders so that his factory can be competitive on price.

On the other hand, Cite Textil in Peru tried to appeal to designers who sought a lower-priced alternative to cashmere by showing off alpaca, which costs 40 percent less.

Targeting new foreign markets such as Russia also helps. Macro View Garment Co., which produces outerwear for companies including Weatherproof and Coach, said its business in Russia increased 30 percent in 2007 from the previous year.

For Austria’s Swarovski, the luxury market hasn’t been hurt by an economic slowdown yet. Like other suppliers of fabrics and trims, the company’s Crystallized Swarovski Elements division presented offerings for next spring, including crystals in new colors such as mocha and a milky yellow color dubbed sand opal. The company also unveiled a new pearl hue in deep brown and shapes like coral branches dyed light blue, white and rose brown. In a sign of the luxury market’s bullishness, big stones measuring as large as 30 millimeters were popular as trim on belts, handbags and shoes, Swarovski said.

The eco theme also extended to fabrics. Karen Sweeney, designer of a San Luis Obispo, Calif.-based golf resort line called Straight Down Clothing Co., searched for bamboo blends and merino wool. Uganda’s Southern Range Nyanza Ltd. hoped to capitalize on the boom for green fashion and the country’s duty-free status in the U.S. by introducing its organic cotton into the American market.

The increased number of eco-oriented vendors benefited designer Yolanda Grutter, who checked out sustainable fabrics for her yogawear and accessories brand, Yoli-poli, based in Valley Glen, Calif. Stepping away from the misconception that eco fashion must be cream in color, she sought tulle adorned with prints.

“I like to take the organic and make it more mainstream,” Grutter said. “That’s why I look for tulle and the embellishments to stylize it.”