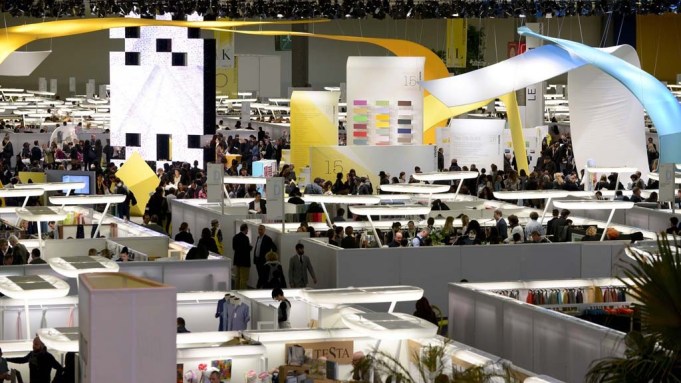 The textile fair’s fall edition, slated to run from Sept. 16 to 18 at the Parc d’Expositions in Paris Nord Villepinte, will for the first time unite all six trade shows featured under the Première Vision Pluriel banner — Première Vision, Expofil, Indigo, Modamont, Cuir à Paris and Zoom by Fatex — as part of one group, following the acquisition of Cuir à Paris in March.

Cuir à Paris, a leather and fur show that boasts annual sales of 6 million euros, or $7.9 million at current exchange, has turned into a strategic partner, reflecting the growing importance of leather goods in fashion.

“When Cuir à Paris joined PV in 2005, it was considered a crazy move,” said Philippe Pasquet, chief executive officer of Première Vision. “Today, leather goods are considered fashion items. They have become important elements in the luxury business, driving major retailers’ sales. And we consider these fashion brands as a market [of its own].”

The move is expected to streamline logistics and provide a more comprehensive offering, along with a more selective choice of exhibitors.

Although Cuir à Paris has shown steady growth in past seasons, this edition’s preregistration numbers are slightly in decline, mirroring the organizers’ strategy to push for more quality. Some 430 leather specialists are expected at the fair.

Separately, Zoom, specialized in fashion manufacturing, will move to Hall 6 from Hall 2 to be closer to the weavers, providing a clearer reading on the selection and aiming to boost alliances between the two sectors.

So far, more than 1,947 participants have been confirmed for the six shows combined. This represents a stable development compared with last year. Some 786 are to show at Première Vision, which will see 44 new names, including 19 knitters specialized in creative flatbed knits and to be integrated into the growing Knitwear Solutions platform.

Among the weavers, four Italians — Lanificio Angelico, Lanificio Fratelli Bacci, Lanificio Paultex and PTC SRL — will be back at the fair after several seasons’ absence.

The Paris textile show is also upping its creativity factor with the arrival of 22 new participants at Indigo. This season, Spanish studio Toc de Groc, specialized in children’s wear, and Historic British studio Palm Designs will fete their return to PV’s creative textile and surface design platform, which is quickly gaining a following among fashion brands.

The ensemble of fairs, which generated revenues of 48.7 million euros, or $67 million, in 2013, is most popular among French, Italian, U.K., German and American visitors.

“The U.S. is really back. It’s our strongest overseas market, ahead of China, Japan and Korea,” said Pasquet, also pointing to Première Vision New York, its sister fair, which took place in July and saw a 7 percent uptick in visitors.

Overseas countries currently account for one quarter of all PV Paris visitors.

According to Pasquet, Europe is also getting back on track, albeit at a much slower pace than the U.S., while Brazil, Russia and Ukraine rank among the weaker players.

“There are no dramatic changes, but the economic and political situation in Brazil is a burden, and yes, the industry will suffer a bit from the tensions in Eastern Europe,” he said. “Ukraine has always been an important production base and subcontractor for Europe and Russia. Some orders are shifting from Ukraine to alternative sources such as Bulgaria. It’s difficult to assess how long it will last, but the latest news has not been very good.”

In general, the industry is looking to diversify sourcing, with Indonesia and Vietnam the rising stars, said Pasquet. He also cited an “interesting move” toward Africa, especially Ethiopia, where Chinese groups are making substantial investments to create an alternative production base.

The executive noted that the Chinese domestic market is of particular importance to PV, as its customers are getting more sophisticated.

“Chinese professionals today are keener to travel to get new ideas and materials,” Pasquet said. “We started promoting PV in China around the year 2000. Last September, China ranked seventh among the visiting countries. We are very optimistic about the prospects.”

According to Première Vision’s fashion director, Pascaline Wilhelm, textile trends for this season’s edition will center on three themes: “high volume,” “simply fancy” and “chaotic allure.” “Volume is a strong theme this fall-winter season, boasting a high level of innovation,” including separable double-faced fabrics, she said.

Wilhelm described knits as “savage, with an aggressive touch, which gives them more character,” and said to watch out for highly distressed denim. “All in all, the surface is much worked this fall and creativity expressed via technique,” she said.

As for color, yellow, mustard, beige and camel are expected to top buyers’ shopping lists, while various shades of red are also to make a mark.

Pasquet added that the fair’s main objective was “to bring in something lively and maintain a high level of renewal,” which at this session will result in a 3-D printing corner at Modamont, PV Pluriel’s show for accessories and components.

“This new technology is rapidly entering the accessories manufacturing sector, producing items such as buttons and buckles, bringing an important advantage into the development,” he noted.

The executive was also enthused about the first edition of Première Vision Istanbul, slated to run from Oct. 29 to 31. “We have reached our goal of providing a truly international offer, assembling both Turkish and international manufacturers,” said Pasquet.

Some 150 participants will be on the initial rooster, including Italy’s Marzotto and France’s Malhia Kent.