RadiciSpandex Stretches to the Future

RadiciSpandex Corp. made the jump from high school to college for its seventh annual Stretch to the Future design scholarship competition. 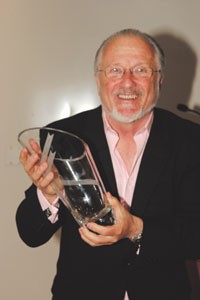 NEW YORK — RadiciSpandex Corp. made the jump from high school to college for its seventh annual Stretch to the Future design scholarship competition.

Stan Herman, president of the Council of Fashion Directors of America, served as designer judge for the event held May 2, which this year graduated to Pratt Institute’s Manhattan campus on 14th Street from its previous home at the High School for Fashion Industries. Herman was also presented with this year’s Stretch to the Future designer honoree award.

“Schools like this need to be nurtured,” Herman said.

Radici altered the rules for this year’s competition, allowing students from Pratt’s school of art and design to use one non-stretch fabric in combination with stretch fabric for the first time. Still, at least 50 percent of the garment was required to be made using stretch fabrics with RadiciSpandex fiber. Students also had to adhere to this year’s black-and-white design theme.

Bill Girrier, Radici’s vice president of sales and marketing, said the rule change was necessary to present students with a more realistic scenario and to show how increasingly easy it is becoming to introduce stretch fabrics into mainstream fashion. Girrier also acknowledged that requiring the entire garment to be constructed out of stretch fabric had proved difficult for students.

The student designs were judged in four areas: originality, best use of fabric, design interpretation and construction.

Sheena Murai won top honors and was presented with a $2,000 scholarship. First runner-up went to Kristina Paulsen, who was given a $1,250 scholarship, while Beryl Crocker won a $750 scholarship.

“One of the biggest changes in fashion over the last 10 years is spandex,” said Herman.

This story first appeared in the May 24, 2005 issue of WWD. Subscribe Today.
load comments
blog comments powered by Disqus