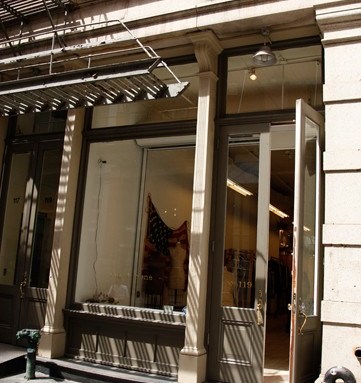 For Rag & Bone owners Marcus Wainwright and David Neville, growing a business in a recession has been a nerve-racking task. It was only last year that the business partners said they were expecting to reach about $10 million in annual wholesale volume for the women’s line alone. This year, Neville said he’s a bit afraid to jinx himself and was not willing to divulge numbers, simply saying, “the whale that spouts gets harpooned.”

But, industry sources said Rag & Bone has far surpassed that $10 million mark, now bringing in more than $20 million in wholesale volume. The company employs 60 people (it had 28 last year) and while it used to sell in 120 high-end specialty stores such as Barneys New York and Bergdorf Goodman, today, Rag & Bone is in more than 300 stores.

Wainwright said he thinks the company has been able to grow so much in the last year because it has seen customers gravitate towards its type of business model. Since the launch of the brand in 2002, he and Neville have dedicated their energies to going back to the way clothes used to be made, when it was a necessity to have quality workwear. About 90 percent of the line is produced in U.S.-based factories — in Kentucky, North Carolina, Brooklyn, N.Y., and Newark — which have been in operation for decades.

“Our clothes are wearable and based around great quality. They aren’t frivolous in any way and people will get a lot of wear out of them,” Wainwright said. “Since we don’t come from a fashion background, we approach these clothes in a much different way than many designers do. We simply want to make clothes that our friends want to wear every day. In a way, I think that people look for this kind of thing in a recession. They go back to what’s important and durable.”

Neville and Wainwright now see the recession as a major opportunity for them to grow even further. This week the partners opened their third and largest store in New York, at 119 Mercer Street in the heart of SoHo. When they decided to move into the space, they couldn’t help but reflect on what they’ve achieved in recent years.

“Just upstairs from here is the Denise Williamson showroom, which was where we got our start,” Neville explained. “We have been in this building so many times and I just never thought in a million years that we would have our own store in SoHo, let alone right downstairs.”

The 2,200-square-foot space, where there used to be a Shin Choi store, is surrounded by neighbors such as Agent Provocateur, 3.1 Phillip Lim and A.P.C. The space, which appears even larger than it is due to the extra high ceilings, is furnished with oversize items such as a massive steel-framed mirror; tall vintage wooden shelfs housing the large array of denim choices; an extra large ottoman with steel Rag & Bone buttons sewn into the fabric made in collaboration with the English furniture maker Chesterfield, and floor to ceiling curtains surrounding the dressing rooms held up by heavy metal meat hooks (a nod to the brand’s Meatpacking District headquarters). While the walls are bare now, painted in an off-white color, Neville said they are planning to welcome an array of different artists to decorate the walls. First, they will bring in large photographs by Mark Borthwick.

“We hope to have this store also be a gallery and a creative lab,” Neville said.

Moving into spring, the duo plans to launch a full collection of sunglasses as well as two new labels, Rag & Bone/Jean and Rag & Bone/Shirt, which not only highlight some of the styles the brand has become known for, but also offer retailers the opportunity to pick up Rag & Bone branded product, but at a lower price scale than the main line. Rag & Bone/Jean includes three styles — a skinny, available in eight colorways; a straight leg in five colorways, and a stiletto boot cut, also available in five colorways. The Rag & Bone/Shirt collection includes seven styles — a classic oxford, boyfriend shirt dress, safari shirt, tuxedo shirt dress, collarless tunic, shirred black tunic and a short sleeve oxford style. Each shirt is available in three colors. The main Rag & Bone line wholesales from $60 to $860, while the new collections wholesale from $70 to $80.

Overall, Wainwright said they aren’t looking to grow quickly, but rather organically, and while they would like to open more stores, there are no plans to do so anytime soon. That, he said, is something Theory’s Andrew Rosen, an investor in Rag & Bone, has taught them.

“We know that if we want to continue to do the art of making these clothes, we have to take it slow and always keep a good balance,” he said.

Neville added, “Andrew is like our fashion godfather, he has taught us so much about this business.”