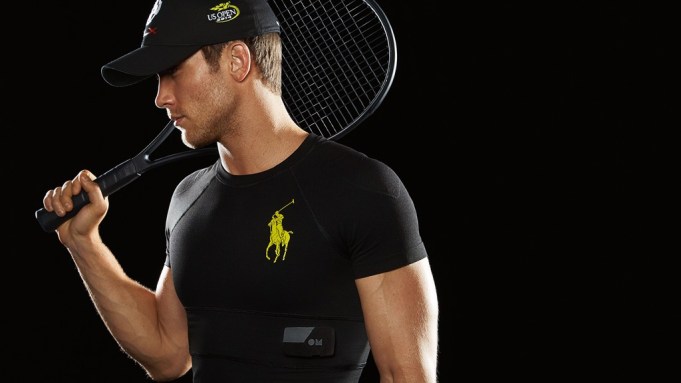 NEW YORK — Ralph is jumping into the wearable technology game.

Today at the U.S. Open, Ralph Lauren will introduce Polo Tech, a compression shirt that reads biological and physiological information via sensors knitted into the product. It’s just the beginning for the company.

“Our goal is to unveil technology that will be in every part of your life,” said David Lauren, executive vice president of advertising, marketing and corporate communications at Ralph Lauren Corp. “We could put it in an Oxford shirt or in a tie from Purple Label. Ralph Lauren has always been about inspiring lifestyles.”

Beyond elite athletes, Lauren sees Polo Tech having relevance for the general population.

“Our vision is that this will transcend sports to help us at every age and in every aspect of life. Reaching far beyond the needs of elite athletes, Polo Tech will offer innovative technology for all ages and lifestyles to promote general wellness and quality of life,” he said.

The sleek black shirt with a signature yellow polo player will be worn by several ball boys at the U.S. Open and is being worn by Marcos Giron, the NCAA singles champion who earned a spot at the Open, during his practices. He will track his biometrics and make adjustments in real time to his play, form and breathing. Ralph Lauren is the official outfitter of the U.S. Tennis Association tournament.

Ralph Lauren became interested in wearable technology years ago when it created products with MP3 players built into the sleeves. “All of a sudden, you could plug your headset into your sleeve and listen to your favorite Beyoncé song while [skiing] down a mountain,” Lauren said. “We were one of the first brands to use carbon fiber in our jeans and clothing.”

Other initiatives by Ralph Lauren include the 4D Light Show, the Dog Walk — a digital showcase of Ralph Lauren fall 2013 accessories in collaboration with ASPCA — and the RL Children’s Virtual Storybook.

“In the last year and a half, technology has changed so much,” Lauren added. “We’ve been innovating online and have been meeting interesting people.”

The Polo Tech shirt was developed with a proprietary technology created by Canadian-based OMsignal. The data collected by the shirt is stored by a “black box,” which includes an accelerometer and gyroscope that capture movement and direction. The black box transmits the data into the Cloud, where it is plugged into a number of algorithms that gauge important performance-oriented biometrics, including heartbeat and respiration, as well as some psychometrics, such as stress level and energy output. The gyroscope can monitor the balance of a golf or tennis player.

“We came across OMsignal, which was doing this technology but really had not launched,” Lauren said. “They were so far ahead of the competition. Our goal is to offer the Polo Tech shirt [at retail] in a few months when we’ll have different colors and patterns and different ways to showcase it. Our hope is to have some product available by spring. We’re working to implement the technology into all different types of fabrics and clothes.”

Possible uses for the Polo Tech technology could be to monitor a child’s vital signs while at school or a businessman’s heart rate after a stressful meeting. “A member of our team said, ‘I was walking down the street the other day and feeling very faint. Is it possible that my wife or doctor could have a reading on my health at that moment?’” Lauren said.

“All this information is coming live,” he added. “We live in the world today where as health information is becoming more valuable and accurate, you don’t have to wait three months for your doctor to analyze you. Some people will use this for serious issues and some will use it to just train and get healthier. We’re all going to know how valuable this will be. We opened the door. This is something that even for us is going to be a learning experience.”

The Polo Tech shirt comes at a busy time for Ralph Lauren. “The Polo brand has gone through a major evolution in the last year,” Lauren said. “We’ve been developing a new Polo brand for women and our store opens next week on Fifth Avenue. A lot of people have been saying, ‘How does Polo, a brand that’s almost 50 years old, stay current?’ It’s all the things we’ve been doing.”

The company has still more to do in the area of wearable technology as well, taking on the likes of tech companies like Apple, Google, Intel and Amazon. “There are an infinite amount of options,” Lauren said.