By Elizabeth Thurman on May 5, 2009
View Slideshow 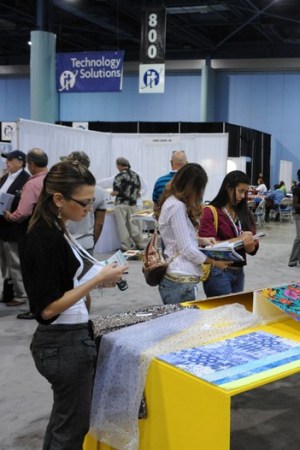 Continued global economic turmoil took a toll on the show, which ended its three-day run at the Miami Beach Convention Center April 23. The number of textile, technology and sourcing exhibitors fell to 268, compared with 400 during last year’s edition.

The show’s organizers declined to disclose attendance figures but acknowledged the difficulties facing both buyers and suppliers in the current environment.

“I’m not surprised by the size of the show,” said Kevin Burke, president and chief executive officer of the American Apparel & Footwear Association, which sponsors Material World. “It’s reflective of the economy, but I have definitely seen more suppliers at this show than I’ve ever seen here before, which means people are hungry to sell.”

Burke noted the apparel industry is often the first to be hit in a recession. “But there will come a time when unemployment will bottom out and companies will start putting their fingers out to see which way the wind blows,” said Burke. “Until then, [businesses] have to make sure their balance sheets are in order, make sure they’re saving their cash and keeping light inventories. If they’re not doing that, they’re not reading the tea leaves very well.”

Attendees expressed concern with production conditions in China and many were eager to look into alternative sourcing solutions, such as opening factories in Vietnam, Indonesia, India and Sri Lanka.

“There aren’t as many Chinese factories offshore as there used to be. They are moving inland, and eventually China will want to buy its own product. Vietnam is becoming a very strong alternative,” said Burke, adding Central America hasn’t been able to verticalize its business to position itself as a valid production option for domestic companies.

At Material World, textile trends ranged from sport performance knits with mesh and stretch, organic and eco-friendly cotton, hemp, seersucker and gingham, as well as romantic floral and geometric patterns.

The Technology Solutions area featured innovative products from providers such as Arigo, a sourcing and trade management company. The company launched a division at the show called Arigo Collective, a software product that offers enhanced visual content management and allows customers more control over documents and images such as sketches, artwork, logos, swatches and fabrics.

Donny Haskins, Arigo’s ceo, projected a 10 percent increase in sales for the year despite a weak economy, attributing potential growth to a more product-driven shift in company strategy and the urgency in nurturing existing clients.

“If we can get one or two strong prospects at Material World, then we’ve had a good show,” said Haskins.

Many exhibitors stressed the importance of product safety issues and compliance.

Susan Power, president of About Sources, a textile sourcing firm in New York, said the industry could expect greater emphasis on being more transparent in compliance issues and production over the next two or three years.

“You really, really have to do your research when dealing with fabrics. For example, lots of people out there say they’re organic, and they are not,” Power said in a seminar for small manufacturers that was held during the show.

Lawrence Serbin, president of organic supplier Hemp Traders, expressed concern over the future of the eco-friendly movement, noting he has recently moved into more home furnishings and mostly sells to upholstery companies. Serbin said producing hemp is especially challenging because of growth restrictions in countries other than China, Romania and Canada.