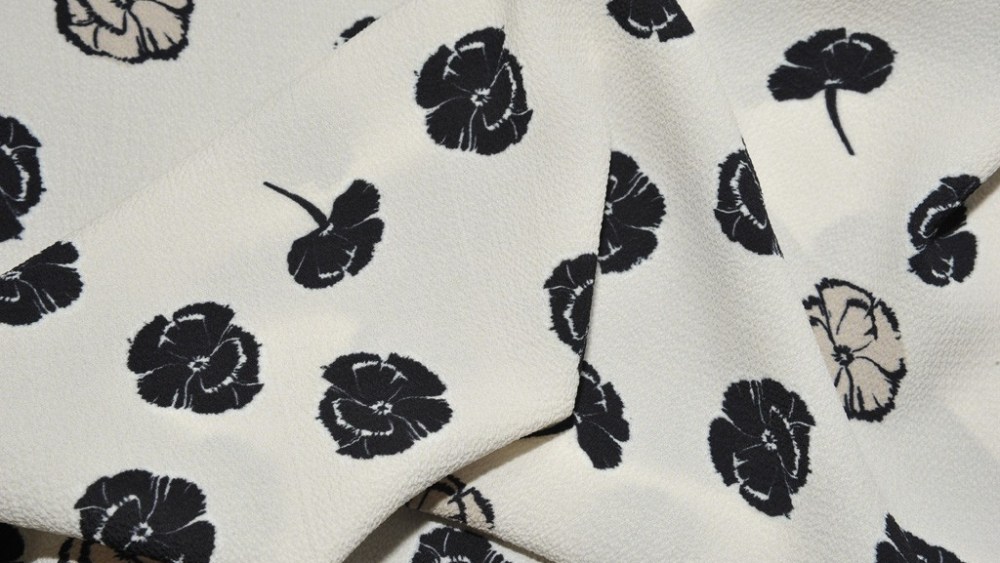 PARIS — Textile companies have responded to price and market-share pressures with greater innovation and are also seeing opportunities emerge in segments such as men’s wear, fast fashion and accessories.

Firms exhibiting at the Première Vision Pluriel and Texworld textile fairs said business has reached a period of relative stability, with product development spurring growth across the industry. The innovations ranged from 3-D effects to textures to sustainability efforts.

This season’s PV fair saw the comeback of Lanificio Angelico, returning with a second collection centered on “creative fabrics,” such as printed wool and Lycra spandex and quilted wool and cotton, which is said to have sparked designers’ interest, including Paul Smith and Giorgio Armani.

“Our core business is elegant, classic wool and cashmere, but we wanted to attract new customers and this is the right place to be,” said the brand’s export manager, Francesca Delleani.

While accessories, comprising mostly ties and scarves, made up 90 percent of his business five years ago, today they account for only 50 percent, with the other half rtw.

“High-end ready-to-wear collections for men have adopted the same system as women’s,” he said, with novelty trading high, “and they have a huge [appetite] for more.” Men’s wear now represents about 35 percent of Ratti’s sales.

“We have strategically restructured our teams, reshuffled and retrained, so that one person is 360 degrees in charge of one customer’s needs,” Ratti added.

Harris Tweed Hebrides, traditionally a men’s wear supplier, is banking on the young fashionista. The Scottish company, which counts Yves Saint Laurent and Rag & Bone among its clients, has also been picked up by lower-priced brands such as Topman and Asos.

“This helps introduce our product to a younger men’s wear generation,” said brand development director Margaret Macleod, adding that when the company launched in 2007 the tweed industry was on the verge of collapsing. “In 2009, the industry produced 500,000 single-width meters. In 2014, that number grew to 1.3 million, 80 percent of which comes from Harris Tweed.”

Accessories are gaining ground at the firm, as its heritage hounds tooth and herringbone are increasingly used not only for classic tweed jackets, but for gloves, hats and men’s bags, too.

“They are a growing market for us,” said Macleod, adding that the company is exporting 60 percent of its production, mostly to Japan, Germany and France.

Muting visitor sentiments was a pilot strike at Air France, which resulted in more than 50 percent of flights being canceled during the week of the fair.

“We are delighted by this rise, which could have been greater, as a lot of visitors could not attend because of strikes at Air France,” said Messe Frankfurt France chief executive officer Michael Scherpe.

The strike, which ended this weekend, also negatively impacted PV. At the fair, which has a clientele that’s 72 percent foreign, visitor numbers edged down 0.8 percent year-over-year to 62,431 this season. Those who made it, such as Erin Beatty, creative director of Suno, lauded the offer.

“Textile development is amazing this season. I think it’s what keeps the Italians in business,” she said, pointing to a rich selection of 3-D effects and texture at the fair. “We are interested in things that are opulent, and like when you can’t tell whether it’s printed or woven, and there is a lot of that deceptive textile play going on here.”

Designer Yang Li spotted traditional fabrics with a surprising touch — “stiff but with a paperlike quality,” and singled out needle-punch and brushed wool products. “It’s great to see that even the huge commercial companies are keen on creativity,” he added.

Other designers, such as Pierre Mahéo of Officine Generale, were surprised by the lightness of winter fabrics. “They look heavy and give volume, but are essentially airy,” Mahéo said. “It’s like Canada Dry — you get the sensation of drinking, but there is zero alcohol.”

At Marzotto Group, profitability in all its branches improved 20 percent this year, according to ceo Sergio Tamborini, who cited wool fabrics and linen yarn as top performers.

“We have grown in the first half of the year, and the prospects for the remainder of 2014 are positive,” Tamborini said. “The market is in good condition.”

Tamborini cautioned not to expect conditions like 10 years ago, which he described as a golden age, whereas today, “the textile market goes up and down every six months.” To stay competitive, the group invested 20 million euros, or $25.4 million at current exchange, into new equipment and machinery. This year it expects to add another 25 million euros, or $31.7 million, to the equation.

Marzotto, which exports 80 percent of its products, mainly to the U.S. and the European markets, is also eyeing new regions.

“We have to look at South America and why not Africa? It’s a niche market for now, but we need to think more about the future,” Tamborini said.

Innovation was also highly traded at Lanificio Stelloni, which joined forces with Green Line and Nuova Fratelli Borletti to develop Reverso, an eco-friendly technique that spins wool from pre-consumer waste yarn. The product, which is 100 percent made in Italy and traceable throughout its supply chain, emits 925 kilograms less CO2, saves 3.220 kilowatts of energy and 24 cubic meters of water per 1,000 kilograms of wool.

The cashmere version of it is to make its debut within Gucci’s women’s, men’s and children’s collections for fall 2015.

“We are fighting with a difficult market,” said Chiaretto Calo, global commercial director at Miroglio. “When we grow, it’s not thanks to the market, but thanks to innovation and extending the lines of product.”

In a bold move to speed delivery, offer targeted customization services and keep up its sustainability efforts, the Italian group has fused its textiles and clothing supply chains, all the way through to logistics. The new business structure, spanning from the procurement of raw materials to the supply of finished garments, is expected to help bring production back home from Asia.

At Texworld, exhibitors were also putting an increased focus on innovation and design to reduce the price pressures that dominate, notably in the fast-fashion segment, and to differentiate better.

This was especially the case for Chinese mills, which represented more than half of the 881 exhibitors at Texworld and have been heavily impacted by rising labor costs and a transfer of sourcing to cheaper countries, notably in Southeast Asia.

“Our industry is trying to work on automatizing production to decrease labor costs, and on new fabrics and technologies,” Lin Yunfeng, vice chairman of CCPIT-TEX, the Chinese sub-council of the textile industry, told a press conference. “Our aim is not to regain a lost market, but to move toward the industry of tomorrow,” citing improved design capabilities as among the leads for development for Chinese mills.

“We’re putting more effort into innovation,” said Ted Lin, sales manager at Mozartex, which is trying to take its Tencel-based offering into new areas such as a coated leather-look fabric and woollike materials. “People are buying added value. In the past, we could do something basic. Now you have to lower prices for the basic quality.”

A smaller Chinese player, Hemp Fortex, has gained a key competitive advantage by understanding the need to innovate earlier than others. The company, founded in 1999, offers natural, organic and recycled fabrics, maintains a design studio in Seattle and counts companies like Patagonia, Nordstrom and Marc Jacobs among its customers, despite having higher prices than more-traditional Chinese producers.

“Price is not our strong point,” said president H.L. Ding “Our products are not competitive with conventional [fabrics].”

Nevertheless, the company has seen consistent year-over-year growth, he said. Ding also believes that in the current climate, Chinese companies can no longer compete on price alone, adding, “We have to upgrade our product level and our customer level.”

Differentiation was a winning strategy cited by several designers as the market continues to improve, allowing them to pick up on higher-priced novelties, proving that show organizer Messe Frankfurt’s bid to put more of a fashion-forward spin on the event was paying off.

Rebecca Tong, design manager for U.K. retailer The Edinburgh Woolen Mill, said, “We’re really price-conscious, but if the fabrics look fabulous and we know they are right, we can afford to look.”

Others, however, like C&A women’s wear designer Wolfgang Schmedt, bemoaned the higher price levels for the more innovative fabrics on offer. Schmedt said, “The new fancy fabrics are a lot more expensive. I have to decide more carefully what I select.”

NEXT: Top Trends at PV and Texworld >>

Several key trends emerged at Première Vision and Texworld, including:

• Prints: Ratti has recovered old wooden block prints from their archives, mixing this vintage technique with digital screen prints to great effect — their bleeding prints with an uneven effect were a showstopper. Brushstroke prints looked fresh at Charlotte Beevor, winner of this season’s Texprint Award for color, while Will Knox reengineered plaids and tropical florals from his father’s archives at Palm Design. Printed silks and silk and wool blends were key selling points for Turkey’s Mert Ipek.

• 3-D and Texture: Faux fur and origami-style ultralight velvet at Redaelli Velluti made an impression. At Ratti, fil coupé and nylon organza got overprinted and overpainted, while the coating of some wool fabrics was laser-burned to produce an original texture.

• Denim: Stretch denim and genuine Japanese selvedge were in high demand at Kuroki, with a waiting period for some selvedge items, as premium denim is experiencing a particularly good run in Europe. An “ice finish” has been introduced at Lanificio Europa to make stretch denim more resistant.