His newest venture, Arthur George, will launch at Neiman Marcus on Nov. 9. 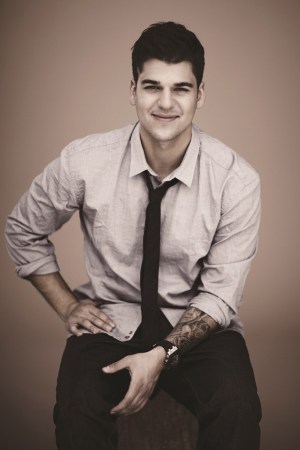 When it comes to the Kardashian family, Rob is the shrinking violet — at least by Kardashian standards.

This story first appeared in the October 29, 2012 issue of WWD. Subscribe Today.

Early next month, Kardashian will be shouting about his newest venture, Arthur George, a collection of men’s socks that will launch at Neiman Marcus on Nov. 9. The retailer has the exclusive for two months, at which point distribution will be opened up. Women’s and juniors socks will be available online following the Neiman’s exclusivity period.

“Socks are something I’ve always been passionate about,” he said. “I have friends who own streetwear companies and they ask me to pick out anything I want and I only go for the socks.”

He said the name of the line is a blending of his own middle name, Arthur, and his father’s, George. “I wanted to stay away from using my last name,” he said. “The label still says it’s by Robert Kardashian, but I’m more comfortable if it doesn’t scream Kardashian at you. We don’t have to overkill everything but, at the same time, you can’t get away from it. And Arthur George sounds classy.”

The line of 100 percent Egyptian cotton socks, each pair of which will retail for $30, features lively patterns and colors that were designed by the company’s in-house design team and approved by Kardashian. “I tell them what I’m envisioning and we work on it,” he said.

Kardashian, who has a business degree from the University of Southern California, is serious about making Arthur George a success and doesn’t look at it as just another celebrity line. He’s busy trying to learn the ins and outs of the business, from design and manufacturing to sales. He hinted an apparel collection may not be far behind. “I’m keeping that under wraps for now, but it would be under a completely different name,” he said.

“Ralph Lauren started with ties and I want to emulate that,” he said. “But I’m starting small and I don’t want to fail. And socks is where it begins.”