Samuelsohn Closing In on Acquisition

Stephen Granovsky said Grano was interested in purchasing the luxury men’s wear label during the bankruptcy proceeding of its former parent. 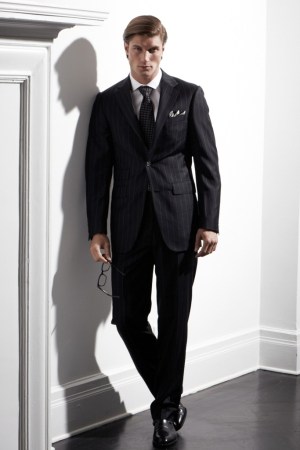 Samuelsohn is on the hunt.

Stephen Granovsky, head of Grano Retail Investments, the investment and advisory company that purchased the Montreal-based brand in 2010, told WWD, “We are in discussions for at least two different acquisition opportunities that would be complementary to Samuelsohn.”

He declined to name names but acknowledged Hickey Freeman “is a great fit with Samuelsohn.” He said Grano was interested in purchasing the luxury men’s wear label during the bankruptcy proceeding of its former parent, HMX Group, and since then has been “actively” discussing how to “find a way to participate. Jamie, Doug and I go way back.”

James “Jamie” Salter is the chairman and chief executive officer of Authentic Brands Group, which purchased the assets of HMX last year. Authentic operates under a licensing model and negotiated a long-term licensing deal with Doug Williams, the former ceo of HMX, to handle the day-to-day operations of Hickey as well as the remaining former HMX brands, which include Hart Schaffner Marx, Bobby Jones, Christopher Blue, Exclusively Misook and Jag Jeans. There are no plans to sell the Hickey brand but its license could be transferred. Salter said Authentic is “exploring  all options.”

RELATED CONTENT: Samuelsohn May Use Hickey Freeman Factory for Production >>

“We’re an investment firm and we’re looking for deals,” Granovsky said. “I have no doubt we will close one deal — or more than one. We believe in this industry. We believe in luxury and men’s wear and domestic manufacturing.”

He said he expects to be able to reveal one deal within the next few months. “We are in advanced discussions with both companies,” he said.

But Granovsky stressed that “any interest in Hickey or its factory, or any other brand,” would not impact the Montreal production for Samuelsohn. “We are not at overcapacity in Montreal,” he said. “We had high-capacity issues in the past, but we’ve addressed those. We’re very careful to protect what we’ve built with Samuelsohn, and it is critically important to our customers that Samuelsohn continues to be produced in our factory in Montreal.”

Sources had said that Samuelsohn was considering moving some of its excess production to the Hickey Freeman factory in Rochester, N.Y.

Granovsky did not deny that JA Apparel and its Joseph Abboud label may be on the short list of possible acquisitions. “It’s not the only domestic manufacturer, but it’s the one with the greatest size and it’s been for sale for a while, so it’s an obvious candidate, but it’s not the only one,” he said.

Granovsky said Grano is “very aggressive and inquisitive” and has had good success since acquiring Samuelsohn. Last year was a record year for the 90-year-old brand that produces private-label suits for Paul Stuart and Harry Rosen and sells its own Samuelsohn-label goods to 250 upscale specialty stores in the U.S. and Canada. Projections are for a 20 percent increase in 2013.

Grano Retail Investments focuses on small to midsize firms in retail, wholesale and manufacturing with volume of between $2 million and $15 million.