Seeking Balance Between Business and Environment 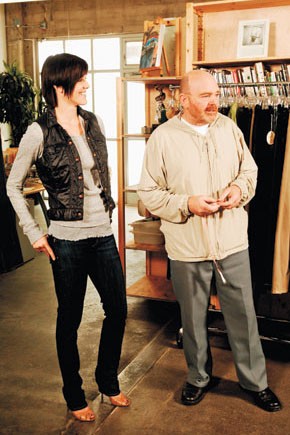 LONG BEACH, Calif. — Satisfying consumer demand for low-cost trendy fashions while pushing to adopt more environmentally friendly practices topped concerns for designers, creators of dyes and finishes and other specialists working in the denim industry at a seminar sponsored by the American Association of Textile Chemists & Colorists.

The two-day event that ended last Thursday at the Renaissance Hotel here drew about 200 representatives from companies such as premium denim brand The Stephenson Denim Finery to the athletic giant Nike Inc. Retailers such as J.C. Penney Co. Inc. and Anthropologie were on hand to view the latest developments to cut costs, improve production times and minimize the chemical-dependent denim industry’s impact on the environment.

Denim luminary Adriano Goldschmied kicked off the event with a primer on new trends in premium denim, twill and knits. He zeroed in on one of the biggest challenges facing the industry in its effort to be greener: being environmentally friendly often means sacrificing on fashion.

“Every segment of the textile industry is influenced by fashion,” said Goldschmied. “I’m not able to sell a jean that doesn’t look good.”

Goldschmied said when he tried to produce jeans with environmentally friendly techniques, he used five times more water than he would have with a conventional design that looked much better than the eco counterpart. He is searching for a chief green officer for his GoldSign label, which Citizens of Humanity acquired in September.

“I want someone to tell me what to do [to run a sustainable business],” Goldschmied said.

Companies such as Cocona Inc., Jimtex Yarns and Antex Knitting Mills are promoting their environmentally friendly fabrics to denim brands, including Seven For All Mankind and True Religion, which are expanding into tops and other sportswear. Boulder, Colo.-based Cocona heats crushed coconuts to 1,000 degrees to generate carbon that can be infused into yarns. Even though Cocona yarn has a gray cast that limits the color palette, the fiber has been used by companies such as Patagonia, Izod, New Balance, Eddie Bauer, Marmot and Oakley.

Jimtex produces fabrics made of cotton scraps recycled from textile waste. Its products have a heavier weight that is good for fleece, said Stefanie Zeldin, Jimtex’s director of marketing and sustainability. Jimtex offers recycled cotton yarn in more than 50 colors, but it can’t always fulfill requests for custom colors because the hue depends on what is recycled, she said.

Jean Hegedus, ready-to-wear marketing manager at Invista, urged more cooperation among the textile industry and sectors such as electronics, environment, home care and health care in an effort to widen the use of fabrics. For example, Hegedus envisions products that can protect the wearer from heat. Consumers, especially teenagers, expect more for their apparel, she said, observing: “If they don’t get more, they’ll be bored.”

Brands and retailers are turning to technology to improve productivity and lower environmental impact. Modusitaly introduced a silicon mold designed to help denim producers create consistent marks like whiskers on a mass scale. Whisker patterns are digitally designed on the surface of a mold that is then mounted on a mannequin. A pair of jeans is slipped over the mold and a worker or machine scrapes sandpaper or chemical-soaked sponges on the fabric to bring out the whisker pattern. While a machine can take one minute to brush, sand and distress whiskers on each pair of jeans, a worker takes a little over four minutes on average to do the work by hand. Those same three procedures done without the mold would require three workers taking seven minutes total, Modusitaly said.

Another development in dry processing is laser technology from Spain’s Garment Finish Kay. Enrique Silla, president of the firm, said the laser machine eliminates the need for hand sanding, sandblasting and potassium permanganate sprays that all require a number of workers and pose health risks such as hearing loss and respiratory problems. He said the laser machine, run by one worker with graphic design skills, can produce 3,000 jeans a day. In 2007, laser machines produced 200 million to 300 million jeans, or 5 percent of total global production, he said. Laser machines aren’t cheap, with prices that start at 100,000 euros, or about $144,000 at current exchange, Silla said.

Ozone also represents a new ingredient for treating denim. Fiber Zone Licensing, based in Bowling Green, Ky., licenses its technology to washhouses that want to use ozone in wet and dry processes and create weathered, vintage and stonewashed finishes. Mark Harris, chief executive officer and president of Fiber Zone, said ozone is a more powerful oxidizer than chlorine for bleaching and requires less water and time. For example, in stonewashing, ozone treatment uses at least a third less water than the traditional technique because it doesn’t require sizing and enzyme washes with hot water. The disadvantage is that ozone will oxidize latex and mute reactive dyes. Because it is a licensing business, Fiber Zone charges a fee for each unit. A women’s T-shirt would cost 7 cents per unit, Harris said.

Other companies addressed the environmental advantages of using their products. Clariant Corp. said sulfur dyes, which are biodegradable, don’t contain heavy metals or Azo and are often approved by Oeko-Tex, an environmental certification agency. DyStar addressed alternative bleaches including organic peroxide and the applications of resin.

Henry Boyter, director of research at the Institute of Textile Technology in Raleigh, N.C., reiterated that running a sustainable business will cost money. Taking the steps to meet a standard regulated by an independent agency costs about $25,000, he said.

Even with dyes found in nature, there are drawbacks such as high cost. Cochineal, which needs 2,000 of the namesake insects to make one pound of dye, costs $4.50 per pound, said Michele Wipplinger, international color specialist and textile designer at Seattle-based Earthues. Wipplinger also noted that Wrangler is blending natural indigo with synthetic indigo so that eventually the natural dye will make up 40 percent of the total combination.

“The concept of a cash crop is increasing and [farmers] are growing natural dyes for a market that is also growing,” she said.