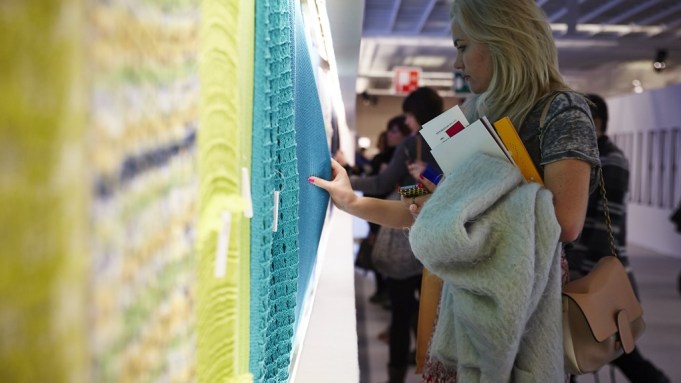 Meanwhile, premium Italian yarn-makers at Pitti Filati reported growth. Millefili saw a “double digit” increase over 2013, according to owner Francesco Galli, who reported sales for 2014 at 65 million euros, or $73.8 million at current exchange rates. Sales rose 12 percent at fancy yarn-maker Lineapiù, with a volume of 41.8 million euros, or $47.4 million, in 2014, according to president and ceo Alessandro Bastagli. Meanwhile, cashmere specialist Cariaggi closed 2014 with 103.5 million euros, or $118.19 million, in sales, a slight rise over the year before.

“We are satisfied with this edition of Pitti Filati. We recorded a slight increase in [buyer] attendance, especially with regard to foreign countries,” said Cariaggi board member Cristiana Cariaggi, who noted that an increase in buyers from the U.S. was followed closely by France and Germany at the Cariaggi stand.
Buyers in general were on the rise at Pitti Filati, totalling 4,150, a 3 percent increase compared with January 2014, with strong double-digit increases in the number of buyers from the U.S., the U.K., Japan and China.

Cariaggi said buyers were particularly attracted to the firm’s new ultralight yarns that can create veil-like transparency and lightness. Cariaggi has increasingly raised the bar on the fineness of its yarns. This edition, it introduced an ultralight merino wool yarn dubbed Ephesus and a cotton yarn called Belize, as well as finer versions of its pure cashmere Soffio and cashmere-and-silk-blend Jaipur. Cariaggi also delved into new yarns using vicuña wool.

Premium cotton specialist Iafil, known for its Peruvian pima cotton, reported that softer hands and interesting details were particularly popular with buyers. A spokeswoman cited a double-dyed batik yarn as an example. A worn-looking, two-tone pattern resembling batik can be made when a dark surface color is eroded through a chemical wash to reveal a lighter color underneath.

Elena Salvaneschi of Iafil said knits were also trending toward woven-looking and quilted textures with the move toward more automated knitting. She showed a series of samples made with a new machine by Shima Seiki that gave a quiltlike structure through the use of nylon mesh caging.

Unlike wool-makers, Iafil relies on the warm season for roughly 90 percent of its sales, according to company chairman Stefano Salvaneschi. He said Iafil saw sales of 15 million euros, or $17 million, in 2014. Results were stable, but the economic outlook had seemed relatively bleak until the dollar began to strengthen against the euro last fall, he added. Although the strong dollar makes purchasing cotton more expensive, raw materials constitute just 23 percent of the price of the yarn, and raw cotton prices have been down. Added costs are more than compensated by additional purchasing power for foreign buyers, bringing down Italian yarn prices for American and Asian buyers.

“Before this edition of Pitti Filati, they didn’t understand viscose and didn’t consider it a noble fiber,” said Bastagli. “Now they are beginning to appreciate it.”

Ilaria Taddeucci, who runs premium yarn spinner Lanificio dell’Olivo’s creative, marketing and sales areas with her sister Chiara, said she found buyers were interested in technical performance and comfort fibers.
“Last summer, the trend was still embryonic. Now it is peeking through,” said Taddeucci, who added that clients were looking for versatile fibers for use in “modular” collections, as the two-season rhythm breaks down.

Silvia Poggiolini, knitwear designer at Staff International for Viktor & Rolf and Marc Jacobs, said, “There weren’t really any trends as there were in the past,” adding that this was a “good thing,” but also confirmed the observation that technical fibers were “gaining ground,” as well as the convergence of knits toward fabrics that can be used for tailored clothing, such as knitted jacquards.

Poggiolini was impressed with Dyloan Studio’s application of new technologies developed by the Bond Factory, including thermal bonding of knits to other materials.

“There’s a lot of creative ferment,” she said, regarding the multifunctional, innovative yarns she saw, adding that the Filpucci and Be.Mi.Va collections were standouts for spring.