Siki Im, Title of Work Selected for the CFDA and Milano Unica’s The Fabric Program

The designers will be able to travel to Italy and work directly with textile mills as part of The Fabric Program, an initiative between Milano Unica and the CFDA. 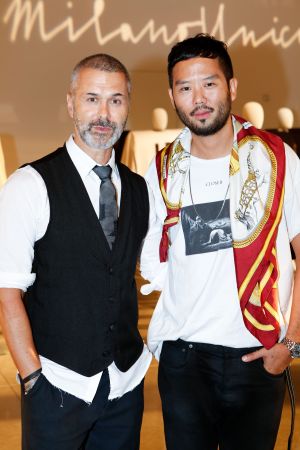 NEW YORK — On Wednesday night, guests gathered at Spring Street Studios in New York to celebrate the second round of The Fabric Program, an initiative between Milano Unica, the textile and accessories trade show, and the Council of Fashion Designers of America.

The CFDA selected men’s wear brand Siki Im and Jonathan Meizler, the designer behind men’s accessory line Title of Work, for the project. A women’s wear designer will be revealed soon. As part of the program, designers will be able to travel to Italy and work directly with textile mills to produce fabrics they will utilize in their upcoming lines.

“I use 95 percent Italian fabrics already, so being a part of this is organic to my process,” said Siki Im, who also won the Woolmark USA prize last year.

Last year the CFDA selected women’s wear designer Ryan Roche, accessories designer Gigi Burris and knitwear brand Orley to be a part of the program, and according to Steven Kolb, the CFDA’s president and chief executive offer, they were pleased with the collaboration.

“The Orleys are tough,” Kolb told the audience. “They want to make sure that if they are going to take the time, they are going to get something out of it, and they very specifically said to me that of all the things they’ve participated in this has been one of the most rewarding and beneficial to them as a young brand.”

Over the past year Milano Unica has made a big push into the U.S. market. Botto Poala, Milano Unica’s president, said that for the Milan-based trade show, which debuted in New York last July, the U.S. provides a lot of opportunity.

“We are at a moment in fashion when we are probably in the middle of big change,” Poala said. “We believe that the right answers come from the young designers and from this country, because this country is easier to change than Europe.”