A moment of red-carpet anxiety led Pierre Andre Senizergues, founder of Etnies, to launch his new venture, C-PAS, a line of contemporary eco-apparel. 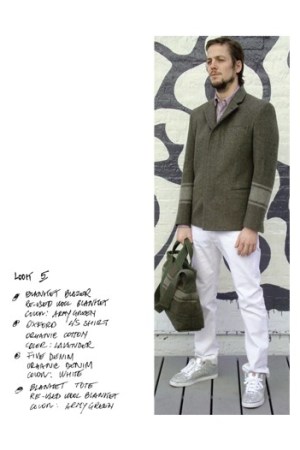 A moment of red-carpet anxiety led Pierre André Senizergues, the founder of skate brand Etnies, to launch his newest venture, C-PAS, a line of contemporary eco-apparel.

The entrepreneur needed a tuxedo to wear to the 2007 Cannes International Film Festival, where he was promoting “The 11th Hour,” an environmental documentary starring Leonardo DiCaprio that he had helped finance. The trouble was, Senizergues couldn’t find anything that reflected the movie’s message of sustainable living. So he designed his own green tux, fashioned from organic wool and trimmed in a shiny synthetic made from recycled cassette tapes.

“It didn’t seem right to make an Etnies suit,” said Senizergues, 45, of the young men’s skate line he founded in 1986. “That customer doesn’t wear suits. I wanted to make something tailored and dressy that reflected my passion for the environment.”

That one-off became the genesis for C-PAS, a 30-piece collection of contemporary tailored clothing and sportswear, all made from organic and cleverly recycled textiles. The shiny cassette fabric is reprised in the tuxedo, suit jackets and neckwear. He used surplus Air Force parachutes for a nylon bomber. Old Army blankets were transformed into thick, wooly coats.

This is not the executive’s first foray into sustainable business. The Lake Forest, Calif., headquarters for his holding company, Sole Technology Inc., which also owns other action-sports brands like ES footwear and Altamont, runs on solar power; Senizergues recently committed to becoming a carbon-neutral company by the year 2020. Last year, the executive launched a line of furniture entirely constructed from old skateboards; Karl Lagerfeld is reportedly a fan.

“For me, it’s all about the environment,” said Senizergues, whose company does $200 million in footwear and apparel sales annually, according to market sources. “I want to raise the bar on sustainable fashion.”

But environmentally guiltless clothing — all of it made in America — does not come cheap. The blanket blazer retails for $2,400. Recycled oxford shirts start at $280; the cassette-tape tie, $170.

Select pieces will retail on the line’s Web site, collectionpas.com, starting April 15. Custom suits are also available out of the company’s showroom in Manhattan by appointment. The full line will launch at Colette in Paris this June.

C-PAS marks Senizergues’ first foray into the dressier fashion market, and reflects the entrepreneur’s evolving personal tastes. “I have been skating for years, but now I need to get dressed up more these days,” he said. “I wanted something that reflected who I am now.”

But he won’t be trading fashion for film anytime soon. “Making a movie is not easy,” Senizergues said. “I loved raising awareness about the environment, but no wonder people go cuckoo in Hollywood.”