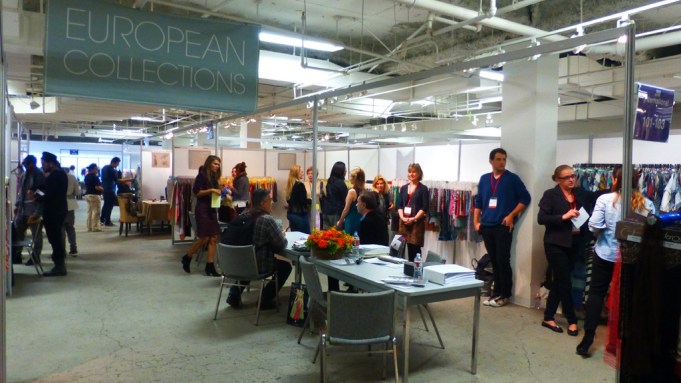 LOS ANGELES — The timing wasn’t great for the latest edition of the Los Angeles International Textile Show, held at the California Market Center for three days ended Feb. 27, but the trends were strong and the mood was upbeat.

There were complaints that the shows had been moved up a full month earlier, setting it in the middle of MAGIC Market Week in Las Vegas and Fashion Coterie in New York, leaving exhibitors scrambling for materials and appointment.

“Ninety percent of my customers are in New York, so the key is to get new accounts,” said Morris Ajnassian, vice president of Los Angeles-based Fiesta Fabric. “We’re meeting mostly with smaller lines.”

Some exhibitors said they came because of the importance of the California apparel market.

“We see value in being here to support our supply chain,” said David Sasso, vice president of sales for Buhler Quality Yarns Corp., based in Jefferson, Ga., whose Supima cotton, MicroModal and Micro Tencel yarns appear in clothes by Splendid, Three Dots and Lacoste. “The better they do, the better we do.”

Show organizers noted that the stars were not in alignment this year due to the early spring holidays of Easter and Passover.

“We polled our exhibitors and it came down to holding the show at the end of February, which was better since the middle of April was too late in the season,” said Alyson Bender, director of public relations for the California Market Center.

Still, the show attracted 138 exhibitors, representing about 220 mills from around the world, including India, Italy, China, Japan and France, about a 12 percent increase over the prior year. Attendance was on par with last year, Bender said, attracting apparel manufacturers and designers including American Apparel, Joie, Karen Kane and Tadashi.

The show was a little late in the development calendar at Manhattan Beachwear, which has a portfolio of swimwear brands that include La Blanca, along with licensed brands Kenneth Cole New York, Trina Turk and Ralph Lauren, said designer Cat Oshman. But she doesn’t like passing on the show and its possibilities of new resources.

“In this case, we found a few great art pieces and new vendors for fabric and trim that made the trip well worth it,” said Oshman, noting that big bright florals and jungle tropical prints in leafy greens were key swimwear trends, along with mixing materials and textures, such as metal studs and embroidery.

Jumping into the booming women’s athletic apparel market, Ursula Angulo, designer for Seven7 Jeans, was on the hunt for colorful materials to work into a new active collection, blending in inspiration from yoga and sportswear. The rest of her team was scouting out elements to embellish knits, such as lace and crochet.

“We’re going from loungewear into this collection for an 8/30 delivery,” Angulo said. “The idea is to wear it with yoga or regular clothes.”

Color played out in geodes and floral prints in greens, corals and blues at Fiesta Fabric, mostly in polyesters and silks with embroideries geared for textured tops. Lively ikat prints in cotton and raw silk were popular at K&I/Kosha Collections. Chevron stripes in bold colors in spandex jersey and printed knits were attracting attention at Robert Kaufman Fabrics.

“The consumer is really understanding and seeing color from the vivid Target ads to the range of new nail colors,” said Deb Porreca, sales director of Michael Miller Fabrics.

Renee Hernandez, a sales rep for Epic Textiles, said “tons of lace” aimed for sportswear was a key spring trend. Highlights included textured styles such as stretch jacquard lace for dresses and pants.

Innovative interpretations of lace were leading trends at Solstiss USA. Silicone overlays gave the lace a futuristic look in shades of blue. Lace embellishments were also novel, such as cording in swirl patterns and plastic matte sequins in fabrics for skirts and tops. Brocades with silver foil in pastels were on display at Solstiss, as well as stretch lace in matte and shiny iridescent colors, such as pink and green.

“Workwear is popular,” Kaufman said. “Fabrics with a heritage clothing feel are resonating with buyers.”

In accessories and trims, two-inch size buttons in polyamide for jackets and sweaters were showing at Dill Buttons of America. Peter Pan collars adorned with pearls and lace were popular at Junior Hagen. The neon influence continued, with fluorescent nailheads in yellow and orange and pink. Appliqués such as laser-cut daisies in faux leather and printed chiffon shaped into ruched flowers were also top trends, said Eric Hagen, managing director of London-based trimming distributor Junior Hagen.

Hagen noted the show was a success in that he “managed to meet with bigger clients” along with newcomers.

One Los Angeles-based new line at the show was Moto Bella, a women’s motorcycle wear collection. Owner and designer Grace Branton was able to find leather trim, linings and hardware zippers and rivets.