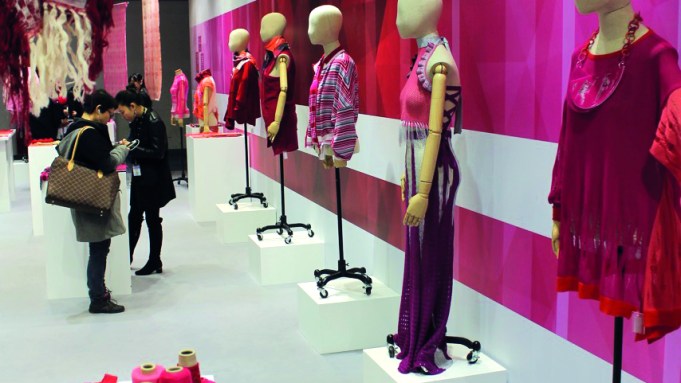 SHANGHAI — There was a clear message from exhibitors and visitors at the SpinExpo fair: Trade in this high-end sector is not feeling a terrible pinch from China’s economic slowdown, thanks to innovative and differentiated offerings.

That doesn’t mean the yarn sector served by the show, which ended its three-day run here on March 3, isn’t impacted by problems in Asian economies.

“It’s not only China — overall the economy is going down right now,” said Man Lam, business assistant at Consinee Group, a specialist in luxury cashmere yarns. “But honestly, it’s the medium- to low-level companies who are going down. The European problem and China’s yuan exchange rate this year are very difficult, so overall the economy is quite negative. But fortunately because our quality is quite stable and we have our long-term business partners, we think that this year the total quantity will still be stable, or maybe slightly increase.”

Fair organizer Karine Van Tassel, who also organizes SpinExpo in New York and Paris, believes that this will continue to be the case for the country.

The number of exhibitors at the fair was up to 155 companies from 11 countries, compared to 142 in the previous spring edition, and included machinery and knitwear manufacturers.

This edition also proved to be the best spring attendance ever, with 10,819 visitors reported over the three days. The number of visitors from China increased by 10 percent, with a total of 9,347, but the explanation for this increase was possibly due to a hosiery show that took place on the second floor of the event space. With 480 visitors, Japan had the highest number of foreign buyers in attendance. The show also noted a rise in visiting companies from Bangladesh and Pakistan.

The show came a few days before the Chinese government set its year-on-year gross domestic product growth rate in a range of 6.5 to 7 percent, down from last year, and shortly after the country reported GDP growth of 6.9 percent for 2015, its lowest rate of growth in 25 years. The volatility of the Chinese stock markets, rising wages in the country, and the continued price pressure from the weakened euro compared to the yuan also factored into trade.

At the fair, there was a continued emphasis on novelties, research and innovation to stay ahead of the global downturn.

“We know that business is China is generally speaking going down if you talk about a very low-level quality, but what we see from our side, as a machine dealer, is that our customers who are buying the machines are making good quality products and investing in real research and development, and business is quite good for that,” said Tiziano Sandonini, marketing director at Santoni Shanghai.

The technical expertise of Santoni Shanghai is also being sought globally, according to the company.

“The machines that we make here, we also export,” Sandonini said. “In the past, we only made for China, but now we also export to South America, Turkey, India, Bangladesh and Vietnam.”

The trend areas SpinExclusive and SpinExplore had a special focus on crisp yarns, paper yarns and stretch combinations. There was a move toward products that transcend seasons, sophisticated but reasonable in price and appearance.

Another big focus of the show was “The Nature Room,” which displayed different home textiles and leisurewear from a selection of yarn exhibitors who offer environmentally friendly and sustainable products. There was also a dedicated space to the organic dyeing of fibers and yarns from Japanese exhibitor and textile manufacturer Shinnaigai, who utilizes teas, herbs, coffees, fruits and flowers in their dyeing process.