Visitor numbers at the yarn and fiber trade fair were also impacted by an unexpected public holiday coinciding with the show’s last day. 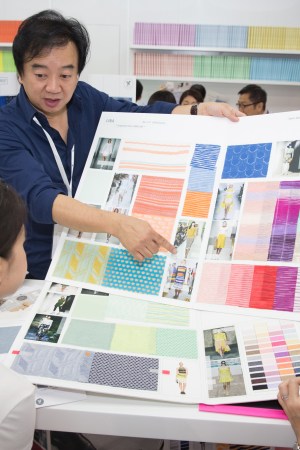 SHANGHAI — Last week’s SpinExpo Shanghai show was held against a background of economic malaise in China and a period of uncertainty for the textile industry worldwide.

Visitor numbers at the yarn and fiber trade fair were also impacted by an unexpected public holiday coinciding with the fair’s last day, announced by China’s central government after organizers had set the dates.

“The buying power from both the domestic market and export market is going down,” Kwong said. “For the season ahead, we can see our sales will be down a little bit, but we are hoping for the best. I think it’s about the fall in overall confidence [in China’s economy]. Everyone knows the stock market has dropped and the prices of houses have dropped, so there is not a good mood for going out to spend money.”

Fair organizer Karine Van Tassel, who also organizes SpinExpo in New York and, as of next July, a new SpinExpo fair in Paris, said the next few years will be about change and restructuring for the industry.

“Everybody is stagnating today,” Van Tassel said. “It’s the new normal. China has been pushing and pushing and today is leveling, and I think we are going to have two or three tough years [for the industry worldwide] when we see how things are restructured and changed.”

Despite the dominant narratives of a Chinese industry beset by currency and broader economic pressures and a reinvigorated U.S. sector, Van Tassel stressed that the situation is more complicated, with long-term success in such a global industry not necessarily tied to the economic woes of any one country or geographic area.

“Everyone is telling us that China is going to sink,” she said. “I don’t believe it at all….China has the best spinners, even better than Italian spinners; the technology is here, there are still machines being sold here.”

Fewer than 9,000 visitors attended the fair, which ran Sept. 1 to 3, down from 11,000 attendees for the fall 2014 exhibition, with domestic visitors noticeably absent on the public holiday. The smaller number of people was cited as a positive by many of the fair’s foreign attendees, who made up about 30 percent of visitor numbers, according to figures from organizers.

Chinese trade shows are generally crowded affairs, making optimal connections and face-time difficult, so for visitors such as Sarah Hayes, material innovation manager for naturals and trims at Patagonia, her first foray into SpinExpo proved productive.

“This is the first time Patagonia has come to this fair, but we are trying to do more exploration into yarn innovation and looking at the forums to see what’s new, as well as to visit our existing suppliers and see if there’s anyone new we should be meeting with,” said Hayes, who added that about 30 percent of suppliers for Patagonia’s natural fiber section already come out of China.

A total of 215 exhibitors from countries such as  China, Italy, Germany, Thailand, India, the U.K., Japan, South Africa and New Zealand showed at the fair, compared with 225 last fall.

Among the considerable contingent of Italian exhibitors, business was described as reasonably good, particularly for fine-gauge and shiny yarns.

The continued weakness of the euro compared with the yuan, even after a recent government-mandated two percent devaluation of the Chinese currency, made high-quality European fibers a good value for Chinese buyers.

“We have done good business, China is a good market for us. Maybe, yes, right now the currency situation is also good for us,” said Filippo Pacini, a representative for exhibitor Lanificio Dell-Olivo. “We have seen more or less the same number of customers, maybe this time less new customers than previous years, but there is definitely a desire for Italian yarns here.”

As for broader trends on display at the fair, innovation was the name of the game, with machine manufacturers developing knitwear that mimics woven materials. Also on display were blends made possible by recent technological innovations, including new merino wool and denim combinations.