NEW YORK — Natalia Allen, co-winner of this year’s Parsons School of Design’s Designer of the Year Award, wants to create fashion that goes from the board to the boardroom.

“I love the idea of a quick-drying and... 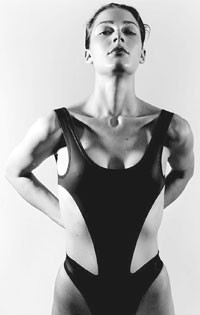 NEW YORK — Natalia Allen, co-winner of this year’s Parsons School of Design’s Designer of the Year Award, wants to create fashion that goes from the board to the boardroom.

“I love the idea of a quick-drying and antibacterial top you can surf in in the morning, then pair with a skirt after and just go to work,” said the 21-year-old Santa Cruz, Calif., surfer who grew up swimming the waters of neighborhood beaches.

She enrolled in UCLA’s pre-med program but then changed her mind and ventured into design. The scientist bug remained, however — it’s the technical part she finds most interesting, such as incorporating the latest in textile engineering into her creations.

“I want to propel the evolution of fashion through intelligent design,” she said, alluding to clothing’s high tech properties.

Allen’s senior project collection, Smhart Gear, features UV-resistant and specially laminated fabrics, as well as seamless and laser-cut garments. Many of the looks in the line marry the functional with the fashionable, such as a white bomber jacket made of nylon ripstop that’s lined in white duchess silk satin coated in Teflon.

Another key piece, a rash guard — the top used to protect surfers from rashes received from the wax used on their boards — is designed using a soft, quick-drying, water-repellent microfiber and features a higher neck to protect more of the skin and reduced seams for less friction and drag. All this with a sophisticated look.

That ethos extends beyond apparel. Also included in the line is a wireless, interactive surfboard that keeps surfers in touch with each other. It also accesses a range of wireless networks including 3G, Wi Fi, GPS and Blue Tooth and can provide important oceanographic information, among other data. Allen also created video sunglasses that are integrated with a camera that can record for up to 24 hours. The footage can then all be downloaded into a computer.

Some believe she’s set to change the world of both high fashion and active apparel.

“She has the widest potential of any student I’ve ever seen,” said Dean Stadel, a professor at Parsons for more than 15 years. “Her approach is creativity to the extreme. She’s enormously innovative, yet firmly based in the real world, which is so important.”

Since graduating, Allen has been a consultant for Friction Free Technologies — a company that has patented a molecular-weight silicone technology that makes fabric less abrasive on the skin — where she has worked with clients such as Nike and Champion. She has been instrumental in getting the word out by talking to companies about two of the firm’s latest offerings: Smart Cotton, a cotton that uses the technology — “It’s a natural fiber, but performs like a synthetic” — and Invisible Armor, a layered fabric that also uses the technology to create a kind of armor that diverts an impact into multiple areas, helping to guard against injury and abrasion.

“My initial reaction to her was that she was incredibly put together for someone her age,” said Robert Gunn, founder and chief executive officer of Friction Free.

In addition to helping current clients understand how to work with the technology, Allen is bringing it to surf, skate and snowboarding companies, he added. Allen is also instrumental in the introduction of luminescent and reflective products at the company.

“It’s hard to believe she’s just out of school,” he added. “She’s so focused on what she wants and is willing to work hard to get it.”