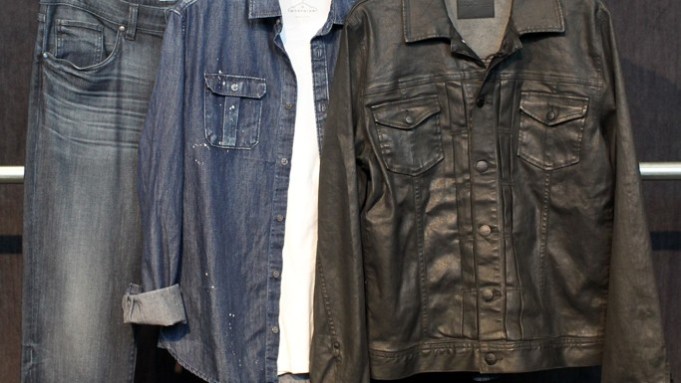 The entrepreneurial chairman of the firm that bears his name has brought on market veteran Michael Press to head a new denim venture, dubbed Greywire, as president. Greywire is slated for a spring launch and will include about 20 styles of women’s and men’s jeans complemented by jackets, knit and woven tops, pants and shorts.

Press’ résumé includes start-up and management posts at some of the major premium and upscale denim brands of the last 20 years, including Diesel, Polo Jeans, AG Adriano Goldschmied, Paige Denim and Earnest Sewn. He was most recently president of textiles at Elizabeth and James following a stint as president of Vintage Revolution.

Greywire seeks to fill what appears to be the growing space between the premium market, generally carrying retail prices of $200 and above, and more moderately priced jeans selling at under $100, with basic and fashion pieces in the $118 to $180 retail range. Expected to sell at about a two-to-one ratio of women’s to men’s initially, jeans silhouettes in women’s include a skinny, boot cut, straight leg, flare and boyfriend. In men’s, the assortment includes relaxed, slim boot cut and a tapered straight leg.

Speaking at the Coterie show Tuesday as he previewed the line for retailers, Press positioned the Tahari sensibility and the denim category as a natural match.

“Elie is a man who can outfit a woman in a $5,000 dress and still look at putting her into a $140 pair of jeans with exactly the same passion,” he said. “I’ve worked with people who just don’t have the same passion when they take the product to a lower price. And with the onslaught of the H&Ms and the Topshops of the world, price has become an issue but it can’t ever be a justification for a product that is anything but overwhelmingly strong. People don’t want to have to spend $250 to get something great. We’re aiming for attainable luxury here.”

Responding to questions via e-mail during a trip out of the country, Tahari noted that his existing collections included denim but simply didn’t make a strong enough statement in the category.

“We have always had an element or pieces of denim in the Elie Tahari women’s and men’s collections with style counts varying based upon the season,” he said. “The Duncan men’s jean is one of our best sellers, but casualwear is not what people think of when they think of the Elie Tahari Collection. Elie Tahari has a larger focus on outerwear, luxurious fabrics and modern, sophisticated silhouettes.

“For the past 20 years, I’ve wanted to expand into denim with a larger assortment, and this is why Michael and I created Greywire. We wanted a separate brand that focused on denim,” he said.

Press said he found Tahari open to suggestion as the concept of the line unfolded and there was consensus on the need for a separate brand name. “At least now, there’s no Tahari mention on the collection. Outside of Ralph Lauren, very few companies have been able to take the corporate brand and use it to market jeans,” he said. “And now, Ralph Lauren is using Denim & Supply.”

Tahari said he sought to create a brand that both existing and prospective Tahari customers “could feel belonged to them.”

The line avails itself of plenty of other corporate resources, however, with operations, marketing, promotion and sourcing already well in place at the $500 million parent company. “You don’t get to build a new brand with these kinds of resources very often,” Press said.

In keeping with the corporate sensibility, branding touches are subtle and include a selvage rear belt or waistband loop, a simple linear “gray wire” on the back pocket and rivets and buttons bearing the brand.

Following Coterie, the division will settle into a new showroom, separate from the parent’s corporate quarters, at 510 Fifth Avenue in New York. Press’ brain trust includes Melissa Freeman, vice president of merchandising and head of department store sales. Distribution is being directed at better department and specialty stores, and Press expects to build international distribution — in Canada, Europe and Asia — from the outset, although there are currently no plans to add Greywire to the assortments of Tahari’s network of stores in the U.S. and abroad.

Referred to by the company as a “partner” in the venture, Press declined to discuss the specifics of his arrangement, except to say it had “really nice structure.” He also declined to project sales for the inaugural collection.

“Especially when you’re starting out, it’s the quality of the distribution, not the quantity, that matters,” he said, adding that he’s prepared to respond to any resistance he encounters from reluctant buyers.