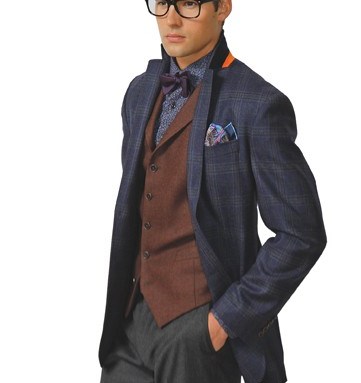 Peerless International has built a $500 million-plus business manufacturing tailored clothing under license for some of the industry’s top brands, including Lauren by Ralph Lauren, Calvin Klein, Michael Kors and DKNY. But despite its more than 90-year history, the Montreal-based company owned by Alvin Segal and one of the largest clothing manufacturers in the world, has never produced its own branded label.

All that changed two years ago when Tallia Orange was born.

The brainchild of Ronny Wurtzburger, president of Peerless and the face of the company, Tallia Orange provides European sensibility at moderate prices, something Wurtzburger said “did not exist in the midtier.”

For example, Tallia suits are promoted at $295 for polyester-viscose blends and $395 for worsted wool three-piece models. There are also sport coats that retail for $199 on average, dress shirts are $75, neckwear is $49.50 and outerwear sells for $165 to $295. A fancy military peacoat retails for $325 and is the line’s most expensive piece.

Although rooted in tailored clothing, the line is targeted to be sold in the men’s designer collection area at department stores. Its primary distribution is at Macy’s, which launched the collection in spring 2009. It is also sold in specialty stores including Boyds in Philadelphia, where Wurtzburger said a Tallia velvet blazer “sat between Gucci and Etro, but ours was $295.”

Ken Gushner, co-owner of Boyds, said the line was introduced three seasons ago and “performs very well. We merchandise it in our contemporary clothing department, where it hangs with DKNY, Hugo Boss and Halston. It brings color, fun and a whimsical spirit to a dull category — all at a very accessible price point.”

A hallmark of the brand is its orange point-of-sale efforts. Mannequins, hangtags, hangers, rugs, graphics — all are in a bright orange hue that stands out on the selling floor.

“Ronny fell in love with Isaia’s red mannequins at Saks,” said Suzanne Anderson, creative director for Peerless. Anderson said when Tallia arrives on the selling floor and is merchandised with the other suits, the orange hangers stand out “in a sea of black. And orange is a color that a lot of guys can relate to, so we decided to go for orange. It’s a fun thing, we give away orange candy and gifts, and it’s very recognizable that it is our brand.”

But the goal is to get it out of the suit department, Wurtzburger said, a move recently made by Macy’s.

“It was a different concept for Macy’s tailored clothing department, so they moved it to the designer collection area,” Anderson said. At the Herald Square flagship, the collection now hangs with Lacoste, Hugo Boss, Armani Jeans and Polo.

“We offer a look that is different but at a great price point,” Wurtzburger said. “It also allows the stores to make enough margin on it.” He attributes the sharp pricing to Peerless’ size, which lets the company get the best possible deals on piece goods and manufacturing, as well as its sophisticated back-office operations in Canada.

The design also sets the label apart from other clothing brands. Reminiscent of Etro in some ways, Tallia is “whimsical and eclectic,” Anderson said. “We mix pattern with pattern. We’re not afraid of color. We show printed shirts under patterned suits and our guy is comfortable with that.”

Suit silhouettes, while classic, are slimmer and narrower to appeal to a younger customer, such as a 25-year-old just out of college who needs a suit.

“He’s fashion-conscious and willing to step out and take risks,” Anderson said. “Our price points make it possible for him to try something without spending too much. He can’t spend more than $400, and the fit and color appeal to him.” The pieces are also “great for going out.”

Wurtzburger said Peerless purchased the Tallia name from the estate of Al Cohen, the former president of Hartz & Co. Although the label had been around for 40 years, it had “shrunk to nothing,” he said.

Realizing that “nobody needs another brand, we came up with a new concept. We noticed that the high-price stores all had very exciting, boutique-y items from Italian brands, so we decided to give them the same flavor but in our attitude.”

From the outset, Wurtzburger was committed to making a statement with Tallia, which he calls “a labor of love.” As a result, he has thrown his considerable muscle behind making the brand a success, even if it takes several years.

Although it is “still a baby,” Wurtzburger said the collection should ring up sales of $10 million this year.

“I took a page from Ralph Lauren, the highest man in our industry,” Wurtzburger said. “He said if you believe in something, you stay with it.”

With that as his mission, the first order of business was to bring in Anderson, who had spent 15 years with Alexander Julian, widely seen as a master with color. “He was a great teacher,” Anderson said. “He created all these color combinations and he taught me everything I know on the textile end. He really understands the importance of color in men’s wear.”

The brand focused first on clothing, but livened up the offering with fancy linings and under-collar orange strips to set the line apart. Worsted wool blazers have built-in pocket squares, orange piping on the interior, metal buttons and collar details. All the linings are designed in-house and change every season.

“Suzanne took my ideas to another level,” Wurtzburger said. He admitted there were times when he thought Anderson may have pushed the envelope too far, but he stepped back and let the design team do what it does best. “She showed me bow ties and I got nervous, but they were right,” he said.

With the tailored clothing on the right track, the company set out to augment the line with other product categories. “Everything had to be moderately priced but look very expensive,” Anderson said.

And so Mario Tomei for I. Miller has been licensed to do woven shirts, J.S. Blank is producing neckwear and pocket squares, Chelsea Imports is doing scarves and Mundi Westport Group is the small leather goods licensee.

For fall 2011, Peerless will expand into outerwear, which it produces itself. But rather than the standard items, Tallia Orange offers fancy peacoats in red, olive, navy, camel, burgundy and other colors, for example. “They don’t need us for black,” Wurtzburger said. Other outerwear pieces are also tweaked to be different and include three-button, shawl-collar car coats in solids and plaids, waxed cotton coated raincoats and toggle coats in a range of colors.

The next addition will be sportswear, the big push for which will come for spring 2012. Offerings will include shorts, cargo pants, jeans, T-shirts and bathing suits.

In addition to Macy’s, the line is carried in Lord & Taylor, The Bay in Canada and Dillard’s. For fall 2012, Wurtzburger said, the distribution is expected to be expanded. For the past two years, Tallia Orange has been shown in a separate area at the company’s booth at the MRket show in Las Vegas, where it will remain, but in August, the brand will break out on its own with a booth at Project.

The birth of Tallia Orange is quite a departure for Peerless, which is “a branded house,” Wurtzburger said. “We license the best brands,” he said, including Sean John, Izod, Van Heusen, Chaps, Bill Blass and Joseph Abboud for men and Abboud, Kors, DKNY, Elie Tahari, Hickey by Hickey Freeman and Tallia Orange for boys.

At the Peerless New York showroom, each label is housed separately to ensure its own identity. The same with Tallia Orange.

Wurtzburger stressed that he would “never do anything that conflicts” with the company’s licensed brands. “It’s tapered, sexy clothing, and [the other designer brands] would reject this if we showed it to them. So we did it ourselves. It’s like a football player who sees there’s nobody between him and a touchdown. He just grabs it and runs with it.”

The ultimate goal for Wurtzburger is to eventually take the label beyond North American shores. The company has advertised in L’Uomo Vogue and is currently in talks with retailers in other countries, which he declined to name. And within the next couple of years he may also consider showing at Pitti Uomo in Florence.

“But we’re trying not to let it get too much exposure,” he said. “We want it keep it special.”

And where does Wurtzburger hope the line will be in five years?

“We would like it to be the number-one fashion label sold in America,” he said. “We want to challenge the European brands. It would be nice if we could get the volume to $20 million.”