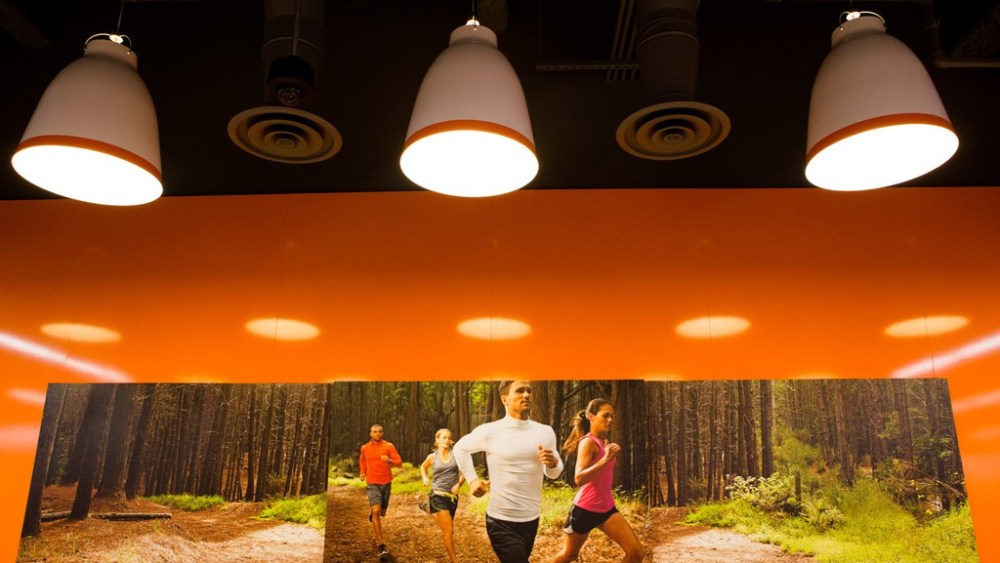 SAN FRANCISCO — Target Corp. has built C9 by Champion into a $1 billion brand within its doors and will soon see how the activewear label performs beyond those barriers.

Today, the Minneapolis-based retailer will open a C9 Active Apparel store, the first retail concept Target has introduced not under its own name since a five-year experiment with specialty Everyday Hero stores ended in 1997. Housed in 3,000 square feet inside Westfield’s Metreon complex in San Francisco just below the fifth CityTarget in the U.S., the store reflects the strength of the activewear sector and Target’s strategy to make further inroads with urban shoppers who are turning activewear into all-day uniforms.

“This site in particular had additional space adjacent to the main store. We started thinking about what brands would make the most sense to isolate from the mother brand. Given the demographics of San Francisco and the growth of C9 overall, it didn’t take long for us to come up with the idea of opening a C9 Active Apparel store,” explained Target spokesman Joshua Thomas, who added, “The goal we had in mind was to create a lifestyle store and separating that from the Target store allowed us to create an environment fully immersed in the brand.”

Besides its proximity to a CityTarget, the C9 Active Apparel store, which Thomas said was designed internally by Target without involvement from C9 by Champion manufacturer Hanesbrands Inc., provides few clues that it is affiliated with Target. There is no Target signage, nor its ubiquitous bull’s-eye logo. Target’s red and white coloration is abandoned in favor of orange, and the C9 salespeople, who alternate between CityTarget and C9, wear orange shirts when on duty at C9. The industrial feel evoked by concrete flooring and exposed ceilings is in marked contrast to Target’s big-box aesthetic.

There are more than 300 styles of apparel merchandise in the store, and more than 100 accessory and sporting goods items. Apparel is roughly 60 percent women’s and 40 percent men’s. The women’s merchandise is grouped near C9 Active Apparel’s main entrance on Fourth Street, while another entrance next to the CityTarget escalators off of Mission Street leads to the men’s area.

Target was careful to localize the C9 Active Apparel store. There are products emblazoned with San Francisco’s main attractions such as the Golden Gate Bridge. A film of people being active around the city greets shoppers when they come into the store, and photographs taken in San Francisco of yoga, running and pick-up football are exhibited throughout. The fitting room even has an approximate map of San Francisco with the message, “You are a run, bike, or yoga stretch away from the best urban workouts on earth.”

When C9 by Champion launched in 2004, sports bras were a core part of the assortment and remain bestsellers. A wall filled with colorful sports bras is a central merchandising feature of the C9 Active Apparel location, as is a wall of basics with socks and boxer briefs, among other items. There are also fixtures spotlighting an array of pants in short, capri, legging and boot-cut varieties. Four display tables highlight specific items, including $24.99 Advanced Super-Soft quarter Zip Jackets and $9.99 Active Power Workout T-shirts. Across the C9 assortment, the categories that are missing from the C9 Active Apparel store are footwear and children’s, which is available at the adjacent CityTarget location.

C9 has differentiated itself from the activewear competition, notably Lululemon, Nike, Under Armour, Zobha, Adidas and Gap’s nascent Athleta chain, by being cheaper. Thomas emphasized that every one of the brand’s products is under $50. Compared with Lululemon, Marshal Cohen, chief industry analyst at The NPD Group, said, “C9 reaches a much broader spectrum of customer. Not everyone wants to spend the kind of money Lululemon charges.” He continued, “The C9 collection from Day One has been perceived as a product worthy of the competition. They [Target] did a very good job partnering with Champion in creating a really high level product that stands up to the competition and has the ability to stand on its own.”

Leveraging the perception that C9 matches the quality of its competitors, Target has increased C9’s price points by offering lines dubbed Advanced and Premium with heightened technology. Advanced is priced from $12.99 to $24.99, and Premium is $19.99 to $39.99. The original Active line is priced from $6.99 to $19.99. “We started testing it [Premium] in women’s. It was so well-received that we expanded it to women’s at all stores, and the response in women’s is why we introduced it in men’s, and the response in men’s has been terrific,” said Thomas. “Consumers are trying the brand, and they are becoming fans of the brand, so they are willing to go up a couple of dollars for added features and enhanced fabrications, but also it reflects the growing trend of people wearing activewear outside of the gym.”

In the year ended July 12, sales of women’s active apparel in the U.S. climbed 7.8 percent in dollar terms to $13.7 billion, according to NPD. The opening of the C9 Active Apparel store suggests Target doesn’t believe the category’s fortunes will reverse, and Cohen agrees. “I don’t see activewear slowing down in the near future,” he said. And Target has noticed a strong interest in apparel in its CityTarget locations that bolsters its confidence in breaking out C9 alongside the CityTarget in San Francisco. “We thought that we would do well with apparel, and that’s been confirmed even more so than we imagined,” said Stephen Brinkley, a group vice president at Target.

There is no retail expansion of C9 Active Apparel in the works. “We don’t have any plans to open up any additional C9 Active Apparel stores, or any additional stores dedicated to any of our other brands, but what is true about Target is that we will look at how this does and will take that into consideration when charting our future course,” said Thomas. Cohen thinks Target would be wise to enlarge the C9 Active Apparel store base. “You have a fanatic consumer. You have a category that is growing at a better rate than the rest of the apparel industry. You have a brand that has consumer recognition and acceptance. You have the need to increase retail space to get growth, and you have leasing opportunities,” he said. “That makes the perfect storm for increasing the business.”