Exhibitors were split between serving a mostly price-driven mainstream market and an upper segment that is focused on newness and creativity.

By Alex Wynne and Paulina Szmydke on February 17, 2015
View Slideshow 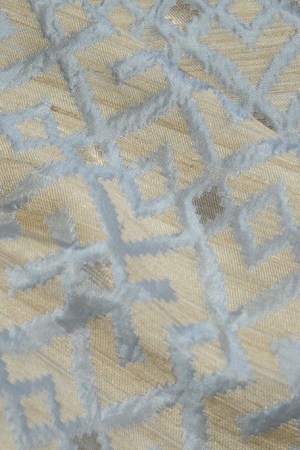 PARIS — There’s a distinctive divide developing in the textile market.

This rift was evident at the major fabric and sourcing fairs Première Vision and Texworld that ended their four-day runs on Thursday. Exhibitors were split between serving a mostly price-driven mainstream market and an upper segment that is focused on newness and creativity, creating a void in the range between.

At Première Vision, which registered a 4 percent drop in visitor numbers mostly due to the absence of Russian buyers versus a year ago, fashion designers said the majority of exhibitors played it safe, offering “a best-of” their archive materials, merely translating them in different colors.

“The average quality this season is not extraordinary,” said Alessandro Sartori, artistic director of Berluti, who lauded Solbiati for its linen blends, Beste for outerwear fabrics and Kanda for its innovative silk. “On the other hand, I see creativity I have never seen before.”

Sartori said this was “a very good season for vegetable fibers, light fabrics and fresh summer colors,” but acknowledged that it was getting increasingly demanding picking the cherries. “Before, we used to see 50 textile makers. Today, we work with just a few. After the show we will go to Italy, rent a car, see one after the other and develop exclusive fabrics with them.”

Designer Pierre Mahéo of Officine Generale lamented the industry’s inability to adapt to the realpolitik of fashion.

“We are going through crucial changes here,” Mahéo said. “The summer collections arrive in stores when it’s zero degrees, and here it’s all about cotton and linen for summer. That can’t be right. Textile makers still think men will dress in white linen suits for summer, when our most important category are trans-seasonal pieces, something between a blazer and a jacket, but that is functional. And I don’t see much novelty in this area. This pushes us to work more on the shapes for next season and use double-face fabrics.”

At Lyria, which caters to the needs of fashion’s higher end, including Haider Ackermann, Lanvin and Paul Smith, sales were up 25 percent.

“We are investing 2 million euros a year into new fabrics — that’s the secret,” said the company’s designer, Riccardo Bruni, who cited cotton and silk mixes with a papery hand, and gypsy-chic patterns as bestsellers.

Luca Breschi, executive vice president of Olmetex, which saw its outerwear fabrics, such as water-repellent silk and double-face nylon, in much demand, noted the company develops “three different collections a year to serve different moments.”

“Buyers are increasingly looking for higher qualities, and my guess is the market will be even more divided in the future: cheap functional garments on one end, high-level development on the other,” Breschi said.

Italian print specialist Ratti Uomo had already split its collection and its team in two. “We are very strong on the high-end, tailored side; now we need to develop the same strength in the mainstream arena which is more price-driven,” said the firm’s head designer, Mario Ratti, seeing growth potential on both ends of the spectrum.

Ratti noted that the rise of pre-collections in men’s wear gave sales a 15 percent boost, but that the company was reinvesting its money into an eco-friendly future.

“If you want to deal with big groups like Kering or LVMH, you need to guarantee certain aspects of production, from water quality to ethical conduct,” he said.

Miroglio said it spent 50 million euros, or $57 million at current exchange, in the last three years on sustainable technology and innovation, including a clean printing machine that saves 30 percent CO2 and energy, and uses half as much water, while French lace specialist Sophie Hallette divulged it has been investing between 1.5 million and 2 million euros, or $1.7 million to $2.3 million, each year to improve its ecological footprint and update its equipment to today’s standards.

“And we plan to keep that level in the next years,” said Romain Lescroart, the
firm’s chairman.

The lace-maker’s two-tone floral micro motif with a mock-solid effect and a novel technique combining embroidery with lace bands, was an example of innovation creating novelty.

Christian Wijnants, who was spotted at Halley Stevensons, said he felt the trend was toward rougher textures, including silk and linen, and lauded the Scottish company for its heavy, waxed coat fabrics. The brand’s director, Martin Wigglesworth, said, “The prospects are good because we are well tuned into the fashion scene,” he said, pointing to its new premium cloth, an ultrastrong fabric spun from nettle yarn suitable for apparel and accessories.

Actor John Malkovich, who was scouting textiles for a new fashion undertaking, said he didn’t bother looking at the trends. “I’m always working with the same people,” Malkovich said. “I’m starting again with a new partner for spring 2016,” adding that the new brand would run under his own name and be based in Paris.

Yiqing Yin said she was pleased with the color propositions — deep indigo hues, luminous yellow, pink and orange — but was disappointed with the technical nature of the fabrics. She noted that she would spend more time at the Maison d’Exceptions, an annual section of PV that highlights craftsmanship from around the globe.

“This is a good place when you are looking for new techniques,” she said. “It’s sometimes a challenge to translate them into wearable pieces, but I love that.”

Eurojersey was pushing the envelope with a new collaboration with fashion design students from Milan’s Politecnico, who translated the company’s range of wrinkle-free fabrics into functional clothing, including a squared cape that folded into a pocket.

The company’s senior sales manager, Matteo Cecchi, said sales were up “more than 10 percent” in 2014 thanks to high demand from the ready-to-wear and sportswear markets, while “a boom” in the North American market has helped the company to secure “some important orders and unexpected [large] re-orders of our Sensitive fabrics range.”

At Texworld, exhibitors were feeling the impact of currency fluctuations. With the majority of exhibiting companies hailing from outside the European Union — 295 of the total 626 exhibitors were from China and 86 from Turkey — many were feeling the effect of buying yarns in dollars and selling their fabrics in euros to European customers. Visitor numbers at Texworld and Apparel Sourcing increased 1 percent compared with February 2014 to 13,639.

Mozart Tseng, president of Mozartex, China’s largest supplier of fabrics made with Lenzing’s Tencel fiber, said the company had seen sales to Europe, China and Japan drop last year and that 2015 would be a tough year, notably in Europe, which represents 35 percent of the company’s sales. “The currency is too weak,” he said. “[European customers’] buying power may be 10 percent down,” adding that with costs rising in China for labor, energy and real estate amid stringent new environmental regulations, the firm is focusing on efficiency to cut costs and avoid raising prices.

Suppliers from Turkey, many of which rely on European brands for up to 80 percent of their business, are having to be increasingly proactive in scouting customers in non-euro markets.

“We are seeking out dollar-based markets,” said Yüksel Temel, Italian export manager for Mem Tekstil, which does 60 percent of its business in Europe. “Profit margins of producers have radically reduced.”
Designers attending the show said suppliers had been successful in developing fabrics that offer premium-look finishes at lower price points.

“You can’t feel the new trends here,” said Bershka men’s knitwear designer Domenico Vitullo, who was shopping mainly for staples. “You have to keep your eyes open.”

Embellished fabrics like embroideries and lace, geometric and Aztec-patterned jacquards and new crêpes were among standout pieces, designers said.

“We are looking for [things] at a cheaper price that look premium,” said Niamh Ryder, senior designer for Styletex, which counts Topshop, Oasis and Carrefour among its customers. “We’re doing things we wouldn’t have before, [but] changing the composition to get the price.”

“My client base has gone slightly cheaper, focusing on less quality and more quantity,” said Jeff Isbitt, U.K.-based agent for Turkish mill Joyteks. “I do a lot with Topshop and their buying in price points have become keener.”

Helena Lau, director of research and development for Marchesa, said the currency situation had less of an impact on her buying at Texworld than it had at Première Vision, where buying European fabrics currently represents a significant advantage. “For a gown, it could be 15 or 20 meters of fabric, so the impact is huge,” she said.

At Texworld, she discovered Lebanese embroiderer Kaskas, which she said stood out for its development capabilities and small quantities. At the company’s stand, purchasing manager Omar Kaskas said he was reaching out to new markets beyond the Middle East because unrest and geopolitical instability had decreased demand from its core customer base.

Première Vision again provided strong trend direction in fabrics. Among the highlights for spring 2016 were:

• Lots of linen: Cotton and linen blends with a crinkled look, in jacquard or seersucker or simply boasting an extra-soft touch were trading high at Solbiati. At Lyria, linen was coffee-dyed for additional energy.

• Eco: While many companies were eager to reduce their ecological footprint in textile manufacturing, Lanificio Europa launched ES, a collection of stretch denim in collaboration with Asahi Kasei’s Roica yarn, made from recycled material.

• Prints and colors: Straight off the catwalks, the Seventies revival had a run at Miroglio, with vintage floral and geometric prints as buyers’ favorites. White-on-white prints using various pigments created deep 3-D effects at Ratti Uomo, suitable for activewear and eveningwear, while Halley Stevensons went beyond traditional hues on heavy waxed cotton.