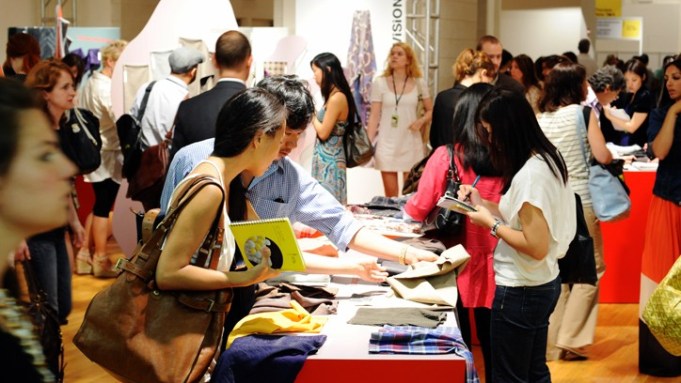 NEW YORK — Organizers of international textile shows taking place here over the next two weeks are welcoming reports of improving market conditions and better moods from buyers, although most still believe the road to recovery will be long.

“There are great expectations about the coming season,” said Philippe Pasquet, Première Vision chief executive officer. “The sales forecasts for the beginning of this year are key to the future of many companies. There are some very good signs of recovery here in the U.S. and also Europe. Emerging markets are still doing well. The mood is better for sure. It’s not as clear as we could expect. We all know the exit from the crisis will be slow.”

Pasquet said the show has responded by continuing to build the services available to buyers and designers at Première Vision Preview. The show kicks off its two-day run at the Metropolitan Pavilion today and will be joined for the first time by Direction by Indigo, the design show Première Vision acquired in August 2008.

The show will also mark the start of PV’s partnership with the Council of Fashion Designers of America. Première Vision is joining the CFDA’s Business Services Network. As part of the partnership, CFDA members can enjoy several benefits, including exclusive online access to see the show’s exhibitors and schedule appointments, the ability to create a “wish list” of fabrics and have Première Vision executives form a personalized road map to navigate the show, and complimentary entrance to the show and the Première Vision — Expofil — Indigo directory. In addition, the Première Vision fashion team plans to stage a show and trend overview for CFDA members, who will also be able to use several lounges and concierge services.

“Our partnership with Première Vision is the best example of the CFDA creating tangible benefits for our members,” said CFDA executive director Steven Kolb. “Beyond the special convenience being offered to the designers, Première Vision is providing direct access to fabric suppliers and facilitating insight into trends and new directions. This is good for business.”

Pasquet said 170 exhibitors will be presenting at the show, between PV Preview and Direction. Preregistration for Direction has increased 30 percent, while the number of preregistered attendees for PV Preview is up 6 percent.

“If we want to get out of the crisis, we have to push fashion again and again,” said Pasquet.

Scheduling issues have pushed the Texworld USA show to the week after PV Preview. Texworld USA will run Jan. 19 to 21 at the Jacob K. Javits Convention Center. The show’s organizers anticipate a lineup of about 140 mills, compared with 96 exhibitors at the January 2009 edition.

“I think the attitude has definitely changed now that 2009 is over,” said Stephanie Everett, group show director for Messe Frankfurt, which organizes Texworld USA. “These guys are a little more positive, but I don’t think anybody expects there to be a huge amount of ordering. Everybody is much more realistic, but it’s positive.”

Everett said the show will add a focus on a select group of domestic resources, with eight mills featured in the Lenzing Innovation section of the show.

“We’ve had a lot of our buyers asking for more domestic resources, that’s been a constant request,” she said.

Alexandra d’Archangelo, marketing manager of textile shows for Messe Frankfurt, said buyers and designers are focused on key sellers and playing it “safe and lean.” That said, she believes buyers will be looking for new items that can trigger “emotional appeal” for customers.

Prefab: The Supima Premium Fabric Show and premium denim sourcing show Kingpins have opted to host their exhibitions concurrently with Texworld rather than PV Preview this season.

Prefab will take place Jan. 19 in a new location, the Times Center in the New York Times Building on Eighth Avenue near the Port Authority bus terminal. Buxton Midyette, marketing director for Supima, which organizes Prefab, expects 70 mills, which is consistent with the last edition, and will continue the wall-board sourcing format of swatches arranged and identified by the mill.

Midyette said interest in the show has consistently grown, and although he also expects buyers to hold back on order writing, they’re clearly going to be out in force.

“As of [Jan. 4], we had 600 people preregistered, which is about three times as many as I thought we’d have at this point,” said Midyette.

The show will also be hosting its third design competition, the winners of which will present their designs in a runway show the evening of the 19th. Rather than presenting one or two looks from the top 20 to 25 finalists in the competition, this year’s show will feature four looks from a group of six finalists.

“It’s been an excellent way to support the designers as well as a way to showcase the licensed mills who are producing with Supima cotton,” said Midyette of the design competition.

Kingpins will be returning to 500 West 36th Street with more exhibitors and additional sponsors. The FiberMax and Stoneville cotton brands will join Dow XLA as sponsors of the show, which will feature 25 exhibitors, a high for the event.

“My show’s physically close to [Texworld], and I liked that,” said Andrew Olah, chief executive officer of Olah Inc., a U.S. agent for foreign contract manufacturers and textile and hardware vendors targeting denim designers, who is also the exhibition’s organizer. “I wanted to be tied to their show.”

“We have reached the exact size I hoped for the show, and it should never be larger than this,” said Olah.