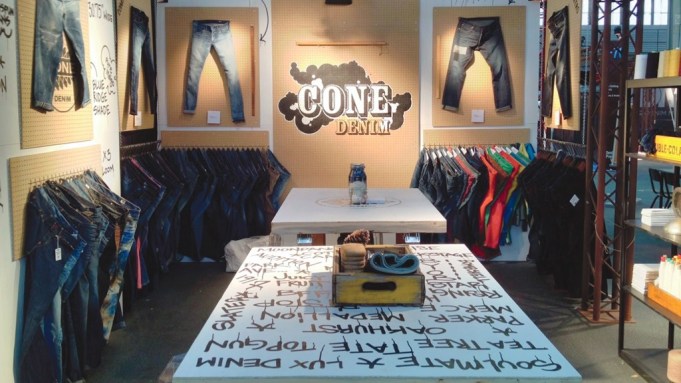 The U.S. textile industry is alive and well, seemingly against all odds.

Despite decades of erosion, the rise of China as a global manufacturing powerhouse and the era of apparel firms “chasing the lowest-cost needle,” the U.S. fabric and yarn industry has not just survived but is in the midst of a remarkable revival story.

The importance of diversity in manufacturing, along with buying patterns that have brought a deeper need for quick response and better quality, has spurred a revival of Made in America textiles and apparel that seems to have gone from near oblivion to promise to a new reality.

RELATED STORY: Made in USA: A Plan and a Passion >>

“I can’t believe I’m even having conversations about the revival of U.S. manufacturing,” said Jim Andriola, sales manager for Texollini, a vertically integrated knitting mill in Long Beach, Calif. “I really never thought it was coming back.”

Jeremy Wooten, secretary-treasurer of the Seams Association, which helps promote economic growth for U.S. sewn products companies, said, “Our membership is up significantly, both returning members that had dropped off and new members from mills and factories starting up. Our annual networking conference…in April was the most well-attended we have had since 1995. It had over 200 factories and supplier representatives that were all U.S.-based, with significant levels of production. There was a consensus that orders were up and the level of interest is significantly higher.”

Roger Berrier, president and chief operating officer of Unifi Inc., a producer of multifilament polyester and nylon textured yarns based in Greensboro, N.C., in a conference call discussing the company’s fourth-quarter and year-end sales and earnings, said, “Over the next two years, we are allocating $14 million for these domestic initiatives, which is in addition to our standard $7 million to $8 million per year of routine maintenance capex.”

Unifi opened a 50,000-square-foot recycling center this year for Repreve in Yadkinville, N.C., that produces 40 million pounds of recycled fibers and is poised to expand capacity in 2014. Unifi, which launched its recycled line of products under the brand name Repreve in 2007, “will also continue to evaluate opportunities in the 2014 fiscal year that allow us to market Repreve directly to consumers, as it not only continues to build awareness for Repreve among target consumers, it also helps sustain momentum for Repreve brands and retailers by raising its visibility and credibility.”

This includes working with ESPN on promoting Repreve at the Winter X Games in Aspen, Colo., in January and continuing to build brand recognition and awareness through these initiatives, Berrier added.

In retrospect — nobody predicted a revival of U.S. manufacturing as little as three years ago — industry insiders said a confluence of factors have come together to bring about an industry renaissance.

Andriola said one of the biggest factors was CAFTA, which made a region where the U.S. already had business relationships more attractive, along with shifts in the global economy, changes in buying patterns of stores and consumers, and labor and factory safety problems in Asia.

Ronald Sheridan, president of STC Textile Inc., who represents Los Angeles-based Lugana Fabrics, said, “Companies are realizing that the idea of long lead times from China without the best quality just doesn’t work for them anymore, especially in the better contemporary market. They want a more modern way of manufacturing that’s better, faster and closer to home.”

Pat Tabassi, marketing manager for Design Knit Inc., a Los Angeles knitting mill, said, “There is a definite shift to come back to the U.S. for manufacturing. We sell to a lot of local L.A. brands, but we also service the New York market. The last few months have been particularly good.”

Tabassi said the nature of Design Knit’s business as a knit-to-order mill specializing in development and production for the designer and contemporary markets is well-suited to the trend of more brands and retailers looking to make at least part of their merchandise in the U.S. She said customers like being able to have quick delivery, hands-on quality control, design innovation and relatively low minimums.

In New York, Keff NYC, a knit manufacturer that opened last year in the heart of the Garment District, is about to produce its first full season for fall.

Ricky Schiffer, a co-owner with Leonard Keff in the company, showed off samples from an initial order of U.S. Olympic knit gloves and scarfs for the Echo Design Group, which makes licensed Ralph Lauren accessories. After a scuff-up at the last Olympics, when apparel Lauren produced for the U.S. Olympic Team Opening Ceremony outfits were found to be made in China, the company pledged to make all its Olympic merchandise in the U.S. Schiffer also had in production sweaters for Abercrombie & Fitch’s “American Made” line, and tote bags for Anthropologie.

“The stores and brands that we’re starting to do business with feel that their customers will pay a little more for a Made in USA style versus one made in China,” Schiffer said. “When people see what we can do, that we can get them samples and customize styles, that we can offer quick response and that it’s made not just in America but in New York, the response has been tremendous.”

One of the yarn mills Keff works with is Huntington Yarn Mill, a 60-year-old spinner and dyer based in Philadelphia. Fay Jaraha, vice president of marketing at Huntington, said the firm has survived by producing specialized high-end novelty and metallic yarns, in combination with its on-site dye house.

“The revival of American industry and pride in domestic products is helping to shore up our business and create new jobs for our mill, which in turn goes back into building a better community,” Jaraha said.

Many executives, particularly in the yarn sector, said CAFTA has helped their business significantly. The U.S. textile industry is the third-largest exporter of textile products in the world, according to NCTO. Exports of all textile products exceeded $17 billion in 2012, having grown 36 percent since 2009. Total textile and apparel exports were a record $23 billion in 2012. About two-thirds of U.S. textile exports during 2012 went to Western Hemisphere free-trade partners, but the industry exported to more than 170 countries.

“Nearshoring is the new buzzword, with companies wanting to manufacture as near as possible to their home market,” Reyes said.

She noted there is collaboration between the two country’s sectors, such as production in Colombia with finishing in the Carolinas, or goods designed in New York with fabrics from Columbia and assembly in the U.S.

Buhler Quality Yarns, based in Jefferson, Ga., has seen strong export business from CAFTA, and is now getting more activity from places such as China.

“It’s a year like there’s never been in our history because we’re shipping more yarns to Asia,” said David Sasso, vice president of international sales at Buhler.

Sasso explained that this is brought about by higher cotton prices in China and Chinese knitters buying high-quality yarns to upgrade their assortment for their domestic market.

Many agree that rising labor and operating costs in Asia have led companies to take another look at U.S. production, and the recent factory catastrophes in countries such as Bangladesh have made some look for safer shelter.

Wooten of Seams said the factory catastrophes in Asia have “sparked a conversation that we haven’t seen in the U.S. in the last couple of decades.…The rising labor and energy costs there have made people look closer at the full value equation, not just the FOB cost — the risks associated with getting the goods shipped on time, without problems, the value of buying domestically. We’re having retailers come to us looking for help finding the right vendors to test product or balance their production.”

Sheridan said Laguna has expanded its private-label business because more retailers want U.S. production and the quick-turn and on-trend capabilities it brings.

While the yarn and knit companies are feeling the vigor of revival, the nature of the wovens business hasn’t seen as many firms join in.

“The biggest challenge to Made in USA is on the wovens side because of the minimums,” Sasso said.

But others feel there is still opportunity in some woven markets. Responding to a comment during a panel discussion on denim at the Texworld show in July made by Michael Kininmonth, denim project manager at Lenzing, who said, “The new frontier in denim is in China, India and Indonesia,” Monon Clavel, marketing manager for Jeanologie, said, “The creativity of Los Angeles denim wash houses is unparalleled and like nowhere else. They embrace technology such as layering and lasering, which built the success of L.A. premium brands.”

One of the oldest woven mills is joining in the comeback movement. Cone Denim’s historic White Oak mill facility in Greensboro, N.C., the oldest operating denim mill in the U.S., has installed additional American Draper X3 looms in response to the growing demand for Made in USA selvage denim. The expansion will increase its production of authentic vintage selvage denim by 25 percent.

“We recognize the unique capabilities of White Oak and the growing demand for Made in America denim fabrics and garments,” said Ken Kunberger, president and chief operating officer of Cone Denim and parent company International Textile Group. “It is exciting to strategically invest in our U.S. manufacturing base and to further the White Oak legacy.”

Executives said the increased business comes with a commitment to investment so the growth is not short-lived. NCTO noted that the U.S. is the world leader in textile research and development, with private textile companies and universities developing new textile materials such as conductive fabric with antistatic properties, antimicrobial fibers and fabrics that adapt to the climate.

Andriola said Texollini, with a 250,000-square-foot, state-of-the-art facility with capabilities for knitting, dyeing, finishing and printing, is “even working with other companies and investors on ways to combine resources to increase volume capacity.”

Wooten of Seams noted that a problem the industry faces as it tries to revive and expand is having the proper training for workers, especially with the growing automation and computerization of manufacturing. So the organization offers technical training, and is working with community colleges in Virginia and the Carolinas on getting students educated and trained to work in the field.

“Seams also offers consulting services and networking connections,” Wooten added. “Our goal is to cultivate an industry that is recovering from a devastating last decade.”

$3 Billion: The amount U.S. textiles mills have invested in new facilities and equipment over the last three years.