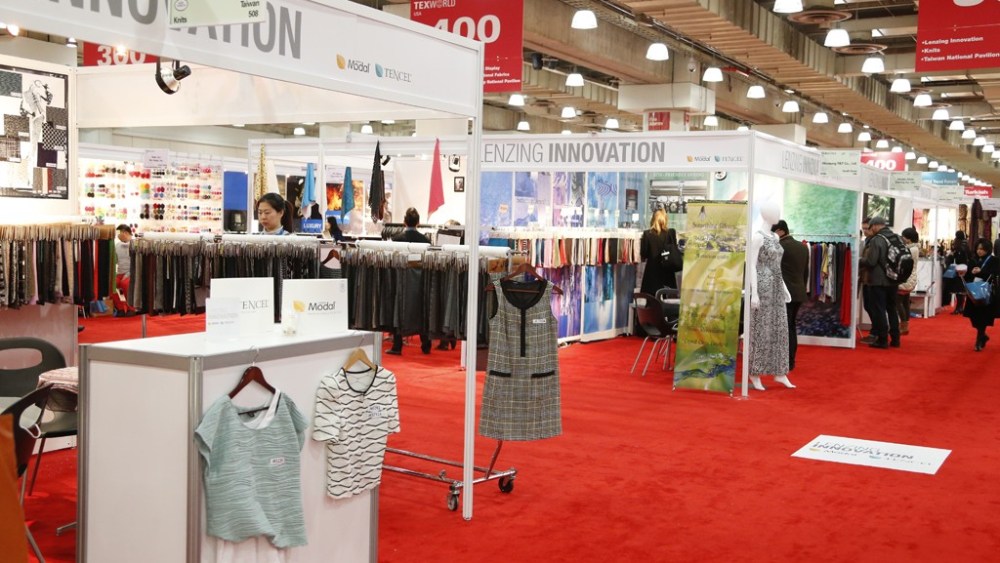 NEW YORK — The sourcing and textile specialists are coming to town at a critical time for the industry.

A range of executives and experts from across the globe involved in the foundation of the supply chain — from the design, manufacture and purchase of fabrics and yarns to apparel production planning and procurement — will descend on the city this month for a host of trade shows, each with its own focus. They’ll be able to network with established and new accounts, scout out fresh materials and suppliers, and discuss a spectrum of pertinent issues on trade show floors and at seminars that will help them plan upcoming seasons’ purchasing and production.

The shows come at an opportune time for planners, with economies in flux, trade issues in play and innovation in high demand.

The exhibitions open in full force on July 16 with Texworld USA and the International Apparel Sourcing Show at the Jacob K. Javits Convention Center, and Spin Expo at the Metropolitan Pavilion, all running through July 18, and Kingpins New York at Center 548 through July 17. The following week, Première Vision Preview New York and Indigo New York take over the Metropolitan Pavilion & Altman Building July 22 and 23.

RELATED STORY: Kingpins NY Amps Up Its Cerebral Side >>

The largest in size and scope are the Messe Frankfurt North America-produced Texworld and Apparel Sourcing fairs, which join with the Home Textiles Sourcing Expo on the lower level at the Javits Center, with a plethora of exhibitor booths and trend areas. Whitney West, marketing manager for Messe Frankfurt North America, said the 15th edition of Texworld USA will be the largest ever, with 426 confirmed exhibitors from 17 countries, with pre-registration topping last year’s attendance by 46 percent. The Apparel Sourcing Show has a 6 percent increase in registrations to date, with more than 120 confirmed exhibitors and associations, on par with last July.

“With companies still recovering from the fallout of the economy, it’s very encouraging there is that level of interest,” West said. “All indications are that there is some manufacturing coming back to the States, and we’re often their first step in finding the mills that can fill that need. Then they can find the partners to manufacture their clothing. The industry as a whole is still doing very well, and there is still a desire for fashion, and people are still shopping and trying to build that back into their budgets.”

West noted that there is a more global scope to Texworld, with Proexport Columbia bringing exhibitors from categories including textiles, trims, labeling technologies and full-package services. The U.S. imported $183 million in goods from Colombia in 2012. Officials noted that Colombian companies offer vertically integrated production, a skilled workforce, quick turnaround and flexible production, and with the implementation of the U.S.-Colombia Free Trade Agreement in May 2012, offer duty-free and quota-free two-way trade.

Texworld USA will feature a new Turkey Pavilion, with 12 companies presenting their fabrics and production capabilities. There will also be first-time exhibitors from Germany and France joining returning firms from places such as Hong Kong, Taiwan and South Korea. The Apparel Sourcing Show will feature pavilions from Mauritius and Pakistan, as well as an extensive Chinese contingent, and companies from India, France and Portugal.

There are also 11 U.S. mills and fabric suppliers at Texworld this season, representing the complete supply chain from spinner to knitter to full-package garments. Six of them — Buhler Quality Yarns, Design Knits, Laguna Fabrics, Mansfield Textiles, Texollini and Tuscarora Yarns Inc. — are part of the Lenzing Pavilion, while Carr Textile, Cocoon House, Elotex, QST Industries and Zelouf International Corp. have booths in the main section of the show.

RELATED STORY: The New York Scene, Summer in the City >>

West noted that the free seminar series coordinated by Lenzing Fibers, which has its own pavilion at the show, is a value-added element for exhibitors and attendees, and also draws many people who come just to hear about the wide range of issues, trends and industry developments that are examined.

Among the key seminars are two consecutive panels starting at noon on opening day. “Sourcing in the Americas” will feature Kim-Bang Nguyen, director of export promotion at the U.S. Commerce Department’s Office of Textiles & Apparel; Jeremy Wooten, secretary-treasurer for SEAMS — the National Association for the Sewn Products Industry, and Sylvia Reyes, apparel and textiles director USA for Proexport Colombia. The session will discuss the extent to which U.S. retailers and brands are looking to bring more of their production back to the Western Hemisphere as labor costs and problems continue in Asia. This will be followed by “Denim’s New Frontier,” where panelists Manon Clavel, marketing manager for Jeanologie; Sarah Ahmed, creative director at DL 1961, and Michael Kininmonth, denim project manager at Lenzing, will look at how jeans continue to gain fashion traction and how the denim industry has taken a leading role in sustainability and corporate social responsibility.

Day two of the show and seminar series starts with a 9 a.m. presentation by the International OEKO-TEX Association to introduce its newest certification, called STeP. Sam Moore, managing director of Hohenstein Institute America, will explain the newest standard in sustainable textile production. At “Fibers From Formation to Finish,” at 12:30 p.m., the audience will learn how Lenzing’s Tencel and Modal fibers are produced, and about their sustainability and performance characteristics, from Tricia Carey, merchandising manager for Lenzing; Jim Andriola, sales manager at Texollini, and Rishi Bali, ceo and founder of Yogasmoga.

The Lenzing Pavilion at Texworld has grown this season to more than 30 mills that use Lenzing fibers participating, from the U.S., Europe and Asia.

“With this array of mills, we have something for every buyer from men’s to women’s to intimates and denim,” Carey said. “There is a large number of exhibitors from South Korea, as this region is innovative and well-priced for knitwear business. Our USA spinner and mill partners will be back again, as this region continues to gain momentum. Quick response and full packages can be sourced in the Western Hemisphere close to end retail.”

At Lenzing’s own space, it will be highlighting denim applications with Tencel and other fibers in its portfolio, such as ProModal and Modal. In addition, there will be a focus on Tencel applications in chambray for shirts and dresses, indigo textures, knits for yoga and activewear, and moisture transfer benefits for performance wear. In Modal, there will be a spotlight on softness and color applications.

Spin Expo, which takes place once a year in New York and features yarns and fibers for knitwear specialists, is set for a full house at the Metropolitan Pavilion with 75 exhibitors.

Karine Van Tassel, founder and organizer of Spin Expo, said, “There’s less business coming from Europe and more from developing countries like Indonesia, India and Russia. The Japanese economy is also showing improvement, and the Chinese domestic market is also increasing. So overall, it is getting better. The U.S. market is always a question mark for me — it’s a very difficult and complicated market. It seems consumers are changing their attitude. They want better-quality merchandise that is well made and will last, so there is a lot of demand from buyers looking for better merchandise.”

Van Tassel said knitwear is a growing area and will have a larger presence this season. She said this is a reflection of what is happening in China, where more spinners have also become knitwear manufacturers, noting that knitwear is an area that allows factories in developing countries to move beyond making basics. Van Tassel added that in addition to the usual core of Chinese exhibitors, the show will feature manufacturers from such countries as Myanmar and Vietnam.

The following week, Première Vision New York and Indigo New York will present a joint edition for the first time in July after coming together for the past several seasons at their January shows.

“Since purchasing Direction in January 2009, our goal has been to provide North American industry professionals an efficient and creative event,” said Gilles Lasbordes, general manager of Première Vision SA. “Our exhibitors are expecting us to create appropriate synergies.”

PV Preview and Indigo will feature 254 design studios, weavers and trim producers. The increase in the number of weavers is significant, with 122 exhibitors in the sector representing a rise of 15 percent over the January 2013 show and 8 percent over July 2012. Italian exhibitors are the largest contingent, followed by companies from Turkey and France.

At Indigo New York, 133 exhibitors will be rolling out their collections across the three floors of the Metropolitan Pavilion, including 18 new exhibitors. In addition to the latest fall 2014 collections from exhibitors, visitors will find several trend areas and seminars to help them gain insight into the season.

Italy’s Olmetex will be showcasing its H2O Protector fabric at PV Preview. George Wells, president of European Textile Trading Corp., which represents the company in the U.S., explained that the cotton fabrics utilize long-staple yarns that when woven tightly produce a high degree of water repellency. The weaving process uses 30 percent more yarn than traditional fabric, making it more wind resistant, too.

Sandrine Bernard, executive vice president of Solstiss USA, said the collection the lace specialist will present at PV Preview “reinterprets older patterns within a modern context by altering the scale and introducing a contemporary color palette…featuring deep hues of warm browns and violets with blue undertones.”