Show organizer Messe Frankfurt said the uptick was a sign of “renewed confidence” in the global economy. 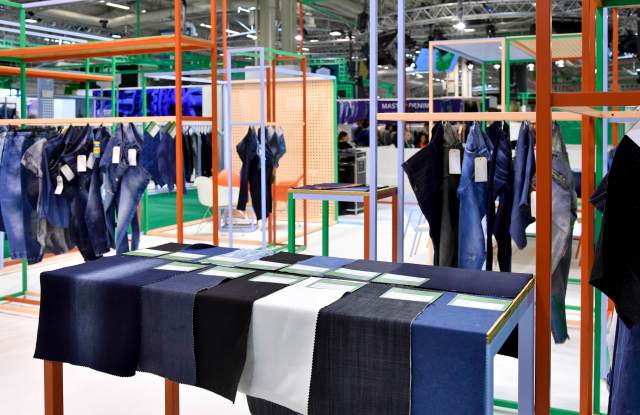 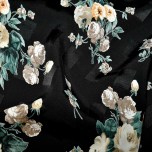 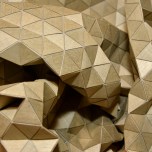 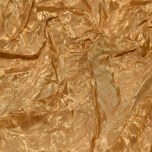 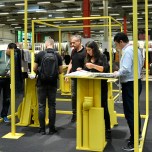 Core fabric event Texworld saw a 10 percent rise in exhibitor numbers to more than 1,000, including newcomers from Sri Lanka, which is working on boosting its textile exports. Sourcing show Apparel Sourcing, where numbers were also up 10 percent, attracted more than 600 companies, with firms from Kyrgystan, Cambodia, Mexico and Myanmar exhibiting for the first time.

Among trends picked out by buyers from Texworld’s offer for fall 2018, metallic and shiny fabrics as well as velvets, embellishments and jacquard were among the high points. “There are a lot of high-shine fabrics and satin, and a lot of laces; we’re going a lot for lace at the moment,” said Louisa Bonfield, a designer for U.K. fashion retailer TopShop. “The colors haven’t stood out for us though,” she added.

Angie Davies, a designer for U.K.-based apparel manufacturer Bus Stop Clothing Ltd., which counts high street retail group Arcadia among its clients, cited printed mesh, high-shine fabrics and printed velvets as strong, while in terms of color, spicy tones like russet and coral were highlights. For visitors from the U.K., price was a key issue, however, given the weak pound. “It’s very bad; everybody is really margin-centric, although there is a call for newness,” said Davies.

In general, buyers praised the show’s continued focus on improving quality and offering a better trend-focused offer. “I’ve not been here for 10 years. We normally go to Première Vision, and we’ve been pleasantly surprised here,” said British designer Cathy Coates, who was looking for textile innovation for outerwear and accessories and said developments in tech and natural fibers were high points at the show.

Sustainability was another area of focus. “We need to look at new materials and production techniques in order to make fashion for this century,” said Aniela Hoitink, whose Neffa agency works to integrate new technology into the fashion world. “We will hit peak cotton in a couple of years, and wool is not very sustainable. There are many reasons to switch to eco-materials.”

Indeed, Texworld’s sustainable sourcing itinerary took in 70 exhibitors this season, up 20 percent year-on-year, proving the growing interest in new developments. Among them, Hong Kong-based vertically integrated manufacturer Tessile Deccano presented its Vegetal Dye and Waterless Dye technologies. “The ecological concepts are attracting certain customers, especially the bigger brands, who are thinking about their brand image,” observed company representative Noel Wong. Visitors to the firm’s stand included Marks & Spencer and North Face, he said. While declining to reveal prices, he said the firm’s positioning was “quite competitive” thanks to its Chinese manufacturing facilities.

At the show’s opening press conference, Zhang Tao, secretary general of Chinese trade body CCPITEX, highlighted how China’s government — Chinese weavers make up more than half of the exhibitors at Texworld — is continuing to push manufacturers to up their fashion and innovation quotients and build sustainability and technology into their business models in the face of increased international competition at lower cost. The Chinese textile industry, which he described as “in a period of transition,” saw sales growth of 5.2 percent in the first half, including double-digit growth for the domestic market. China is the leading supplier of textiles to Europe, according to IFM data.

The press conference was also the occasion for Messe Frankfurt to announce its recent acquisition of South African trade shows ATF and Source Africa.

Other highlights at Texworld included Portuguese firm Portugaliacork, a first-time exhibitor that offers cork fabrics for accessories as well as its own line of finished products. “The reception was great,” said market manager Cristiano Santos. The company’s bonded cork fabrics wholesale for between 18 and 27 euros per meter, and bestsellers included natural cork finishes with touches of gold and silver as well as a new denim shade introduced this year. The vegan-friendly offer also includes fabrics with a reptile-skin effect.

Chinese firm Pretty Girl Tujia, showing in the Elite section of Texworld, showed hand-woven fabrics based on traditional patterns from the country’s Tujia minority. Each meter of fabric takes 7,200 minutes to weave and costs $200 per square meter. Despite this, the firm, which recently began trading, had seen keen interest at the show, including from buyers for Tory Burch.

Indian firm Ero Dyeing, which produces 2 million meters of woven fabrics per month and currently has a minimum order quantity of 5,000 square meters, had seen buyers from Inditex and Tesco as well as many smaller brands that were pushing director M. Gokul to rethink his strategy. “I’m thinking that maybe I can make a stock collection of surplus material, that could be a lucrative market, as not everybody here is looking for bulk volumes,” he observed.

Within the new Texworld Denim section, which brought together 80 exhibitors offering finished products and fabrics for the segment, response was strong. “I think it’s great as a go-to segment. For myself, I can source [as well as exhibit], which is an advantage,” said Steven McGurk, product development and sales manager for Canada-based Makers of True Originals.

At Apparel Sourcing, many cited slower footfall than at Texworld, and this was visible in the aisles. Peruvian alpaca and vicuna producer Incalpaca, a first-timer — the company shows its fabrics at Première Vision — was trying out its finished products, priced between $20 and $35 wholesale, at Apparel Sourcing this session. “It’s not as good as we expected,” said the company’s accessories and homeware designer Micaela Ameri, although the firm had seen interest from Etro, Hugo Boss and Carolina Herrera. In general, she said “the buyers here like our products, but they don’t like our prices.”

French designer Yves Castaldi, exhibiting under the Hong Kong-based LQ Premium label, showed a full pick-and-mix collection. Present for the first time, the designer said he had seen a strong response from brands including Teddy Smith and IKKS. “We offer a service to the customer, coming with a full collection. When the customer comes to us, the collection is almost ready; they just pick out the fashion items and mix them with their own collection. The customer saves a lot of money on development,” he said. “We’re not a brand, but we try to work like a brand.” Highlights from the collection included a hybrid tuxedo-style jogging pant made from Japanese jersey, priced at 17 euros, and a cropped velvet bomber jacket in burgundy with a black organza lining at 100 euros.

India Linen was another new exhibitor, having switched from showing at Texworld to be included in the Shawls & Scarves section with its finished products, with printed indigo designs and unisex scarves selling well. Reporting steadily growing business, head of business development Aditya Agarwal said the show was nevertheless “a little late, by now the buyers have already made their choices for the season.”

In the growing Avantex area, which showcases developments bridging fashion and technology and aims to bring added value to the show’s offer, standouts included MatériO’, a France-based library of innovative fabrics, where solutions on offer included a geometric wood block textile by Elisa Strozyk and metallic textiles from Tacchi SAS.

French company To + Guy, meanwhile, was presenting its Manufacturing on Demand software aimed at helping brands to offer more personalized products through 3-D modeling, reducing the need for prototypes and stock. “It could allow production to come back to Europe and support young designers,” said cofounder Guy Bernier. “It’s a mix of slow and fast fashion.”