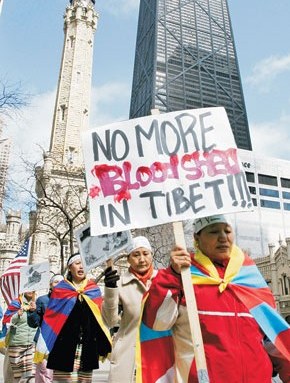 The Beijing Olympics have the potential to be among the most controversial in recent memory — but activewear companies are nonetheless diving in as sponsors.

They can’t afford not to — even though linking up with the Games this time around could have its downsides because of human rights issues in the Asian country. More than the typical surge in sales that active companies enjoy from the Games, the 2008 Olympics are key for brands in establishing a foothold in the huge consumer market that China represents.

Although almost every major sports brand dips its foot into the Olympic pool by dressing athletes and advertising, the most visible are Adidas (the official sportswear sponsor of the 2008 Olympic Games) and Nike (which sources estimate is spending about $150 million for marketing associated with the Games).

Almost across the board, active firms are avoiding demonizing the policies of the Chinese government and dodge questions about whether they worry the protests could hurt their sales — universally saying their focus is on the athletes. But consultants speculate all these companies have put someone in charge of handling any potential crisis, and conversations about a possible backlash are certainly occurring.

Will advertisers get less bang for their buck if consumers boycott watching the Games or turn off their TVs during the commercials, as protesters have been urging? Will customers interpret sponsorship, advertising and ties with the Beijing Olympics as tacit endorsements of the Chinese government’s policies on Tibet, Darfur, the environment and freedom of the press? Will shoppers go so far as to boycott the sponsors, the advertisers or even those with ties as simple as dressing the athletes?

“The labels sponsoring individual athletes probably won’t see any backlash, because no one blames the athletes for participating,” said Suzanne Hader, principal at 400twin Luxury Brand Consulting. “But more general advertising sponsors may very well see some backlash. Part will come down to what the messaging behind the creative is about. If they tailor their creative so it’s more about specific athletes and less about bigger trends and themes in Olympic history, that’s probably a safer bet.”

Of course, almost any company dressing athletes is also advertising. But that doesn’t mean this has to be devastating for the active companies, according to Matt Powell, an analyst for the consulting firm SportsONESource Inc.

“I’m not sure the protesters are the primary sneaker customers,” he said. “But I really don’t believe the Olympics itself drives business. People don’t see pole vaulting and decide to be a pole vaulter. But the brands do a lot more marketing during the event and introduce a lot more product — that combination of fresh new product and increased ad dollars drives sales, though it’s very difficult to quantify the impact.”

“Corporations want to play nice with the Chinese government, which controls their access to 1.3 billion new consumers with an appetite for commercial goods, and they want to raise their profile in China,” Sadler said. “Their investment in this Olympics has more to do with lifetime value and less with immediate sales, but they are also walking a tightrope because they need to be wary that consumers may equate sponsorship with an endorsement of Chinese policies. But consumers are extremely forgiving, and once in the throes of watching the Olympics, which transcend politics and are a part of the human spirit, which is what Nike and Adidas are about, I don’t know it will really harm them.”

Sadler recommended these companies find a way to “be both pro-Olympics and pro-change in China in a way that’s nonpolitical,” like Volkswagen planting thousands of trees in Mongolia.

Marc Gobé, president of Emotional Branding, a New York-based think tank, recommended that companies start a dialogue with their consumers online to ask them what they think of the issues in China and the Games in order to diffuse negative sentiments.

“If you are there with your billboards and commercials, consumers will see you as giving full support to China, and you might be a target for some negative sentiments,” Gobé said. “If you don’t have an active engagement of dialogue for the consumers, you may create customer resentment.”

As the official sportswear partner of the Games, Adidas’ ties to the Beijing Olympics are highly visible. The German brand is sponsoring 16 national Olympic committees, including China; 214 Olympic Federation sports, and more than 3,000 individual athletes — supplying more than 500,000 pieces of apparel and footwear. Plus the activewear giant is investing its biggest marketing spend in China ever in the Games. Its campaign, “Together in 2008, Impossible Is Nothing,” is “designed to bring the Chinese people together and inspire them to rally around the Olympic Games,” according to a spokeswoman for Adidas.

“Adidas is conscious of the exceptional importance of the protection of human rights,” the spokeswoman said. “Sponsors, however, should not be expected to solve political issues. We clearly see the limits of our influence. In China, we focus on the protection of human rights, fair labor and environmentally sustainable conditions in the factories manufacturing our products. We believe that boycotting the Olympics is counterproductive and will therefore uphold our commitment to the Olympic Games.”

For the first time, the entire line of Adidas Olympics TECHFIT POWERWEB apparel and “Made for Beijing” footwear will be available at retail, in Adidas Sport Performance Stores and on eastbay.com. The footwear collection will consist of the shoes the athletes are wearing in 26 different sports. The shoes have functional technology as well as souvenir value, as select styles take inspiration from the Beijing National Stadium, also known as the Bird’s Nest (for example, the outer layer of mesh on the Boxing shoe).

No small part of Adidas’ focus is wrangling for a top position in the giant Chinese market. The company is using the Games as an accelerant to invest in China, where it is building two stores a day, including its largest Adidas Sport Performance store (at about 10,000 square feet), in Beijing this spring. By 2010, China will be the company’s second largest market after the U.S., with a targeted 1 billion euros, or $1.58 billion, in sales. Adidas also rallied the Chinese public by soliciting submissions for a podium suit for the Chinese Olympic medal winners, and the winning design was selected from 2,400 public submissions.

As the first active firm to hit $1 billion in sales in China this year, Nike holds the top spot there now. The Beaverton, Ore.-based firm has been in China for 30 years, and the country is its second largest market globally. Nike is aggressively rolling out stores in China, where it boasts 3,500 doors. Last summer, the firm opened a Beijing flagship that is proving to be one of its best performing units worldwide, according to a spokesman.

For this Olympics, Nike is launching its biggest campaign ever, tailoring its iconic “Just Do It” ads to China’s youth. The campaign already rolled out in China, with a 60-second commercial featuring hurdler Liu Xiang, and will follow in the rest of the world closer to the Games. Olympic fans will be able to buy the new technology, including the lightweight Flywire shoe construction, that athletes will wear during the Games. For example, the 92-gram track shoe Zoom Victory Spike and 13-oz. basketball shoe Hyperdunk are expected to hit stores a few weeks before the Olympics this summer.

Regarding whether some of the impact of the campaign could be lost by people either not watching the Games or actively avoiding advertisers, the Nike spokesman stated: “Like anyone we are concerned about reports of civil unrest in the world, but our focus is on the athletes.”

Nike recently extended its relationship with the U.S. Olympic Committee as an official outfitter of the U.S. Olympic and Paralympic Teams, providing U.S. Olympic and Paralympic athletes with the Medal Stand uniform worn on the awards podium and during medals ceremonies, through the London 2012 Olympic Games. At Beijing, Nike said it will outfit U.S. athletes competing in nearly every sport, including the official uniforms for U.S. National Governing Bodies. Additionally, Nike is sponsoring 22 of the 28 Olympic Federation sports in China.

According to Powell, the “most bang for your buck is promoting a national team who will get play in its home market on the nightly news.” The two highest -profile active markets in these Games — the U.S. and China — are divided between Adidas and Nike, with Adidas sponsoring the Chinese National Olympic Committee and Nike sponsoring the U.S. National Olympic Committee, but Adidas will sponsor several U.S. Olympic Federation sports and Nike will sponsor 22 of the 28 Chinese federation sports.

Although most active brands dress athletes and advertise during the Games — including Puma, TYR and New Balance — Powell identified Adidas, Nike and Speedo as the three active companies most associated with the Olympics.

Speedo sponsors more than 75 athletes in swimming, diving, water polo, volleyball and triathlon. Its newly launched record-setting LZR Racer suit will be worn by high-profile swimmers including Michael Phelps. The LZR Racer will be available to consumers in July for $550.

“Speedo has not received any backlash or protest against the brand thus far,” a spokesman said. “As a brand and company, our primary focus is on the positive messaging of the Olympic Games and the amazing level of hard work and dedication that the athletes have put into each of their sports. We recognize that for many of these athletes, this is a once-in-a-lifetime opportunity and we want to support them however we can in helping them achieve their goal. While we firmly believe in freedom of speech and opinion, we hope that the world can come together and stand united in the positive spirit, sportsmanship and camaraderie of the Games.”