At a time when currencies are seesawing, a limited edition tourbillon or chronograph is looking not only chic, but also like a clever investment. 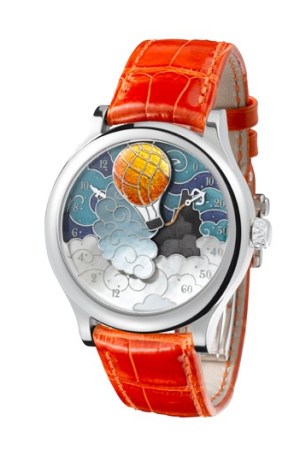 GENEVA — At a time when currencies are seesawing and treasury markets are rattled by fears of a European government debt default, a limited edition tourbillon or chronograph is looking not only chic, but also like a clever investment.

This story first appeared in the January 24, 2011 issue of WWD. Subscribe Today.

Brands showing at the SIHH watch fair here, from Jan. 17 to 21, were keen to emphasize the, well, timelessness of their offerings, ahead of what some experts predict will be a record year for Swiss watch exports.

“The clients who are ready to resume making very significant purchases want to know exactly what they are buying and to be reassured about the investment value of the product,” said Nicolas Bos, vice president and worldwide creative director of Van Cleef & Arpels.

“They want to buy something that not only provides gratification at the time of purchase, but is also going to stand the test of time,” he added.

Van Cleef & Arpels is banking on an exhibition of its jewels, to be held from Feb. 18 to June 5 at the Cooper-Hewitt National Design Museum in New York City, to bolster clients’ perception that they are buying into a piece of history.

There is a more prosaic reason for picking up haute horlogerie timepieces. With the cost of gold and other raw materials steadily rising, most brands are planning price increases in 2011, guaranteeing that fine watches will appreciate in value almost instantly.

The vintage market is also heating up, with Christie’s reporting record watch sales in 2010. Its top lot was a Patek Philippe Ref. 1527, which sold for $5.7 million in May.

The industry’s good health was underlined by results published last week. Luxury group Compagnie Financière Richemont, which owns the majority of the brands present at SIHH, said revenues rose 33 percent in the three months ended Dec. 31, while Swatch Group, the world’s largest watchmaker, posted record sales for 2010 as a whole.

For the first time since the sector plunged into crisis in late 2008, price is no object, according to Jérôme Lambert, chief executive office of Jaeger-LeCoultre.

“What we are seeing here at the fair is a strong recovery in that segment, which really confirms the definite end of the crisis,” added Lambert. Jaeger-LeCoultre is struggling to keep up with demand, despite recruiting several dozen staff since June.

A. Lange & Söhne is facing similar issues. The waiting list for its Zeitwerk is so long that this year’s entire production has been presold, said Gaetan Guillosson, the brand’s president for North America.

But if buyers are willing to shell out for exceptional items, they don’t necessarily want the watch to advertise its price tag.

“Even if the situation is improving, you don’t want to go to the board meeting with something big and shiny, and you also don’t want to be seen with your friends, who have maybe lost their jobs, wearing something too flashy,” said Guillosson.

“The customer is also much more educated today. They know that a name is not enough anymore. They want something else: something perfectly finished, homemade movements, craftsmanship,” he added.

François-Henry Bennahmias, ceo of the North American division of Audemars Piguet, said its New York and Bal Harbour stores posted record sales in December. He expects both the United States and Latin America to repeat their 2010 sales performances this year, with increases of 15 percent and 40 percent, respectively.

“The sellout of our retail network in December was exceptional, which meant that the retailers didn’t keep a very big inventory,” he said. “They are coming here with a good will to buy and to buy a.s.a.p., because they need merchandise in their store.”

Cartier is a case in point. Though it produced the first men’s wristwatch, for Brazilian aviator Alberto Santos-Dumont in 1904, the brand is still primarily perceived as a jeweler. Five years ago, it decided to boost investment in the haute horlogerie side of its business and has been steadily increasing its visibility since.

“Every year is important,” said Cartier ceo Bernard Fornas. “We have gained a strong foothold in the market in the last three years, but obtaining worldwide credibility takes some time. I am patient.”

However, even relative newcomers can benefit from the market revival, provided the product is exceptional. Montblanc, better known as a maker of fine pens, introduced its groundbreaking Metamorphosis at SIHH last year and has sold the full initial production of 28 pieces, priced at around 240,000 euros, or $322,900.

“Everybody is seeking a safe haven in high-quality watches,” said Demetrio Cabiddu, master watchmaker at Montblanc. “They are thinking: I’m investing in a watch that is worth 200,000 euros this year and that will be worth 250,000 euros next year, because the euro will have weakened, but not the watch.”