M: The Making of the Hermès Tie

This is how it's done, from the ateliers of Lyon to the shop window. 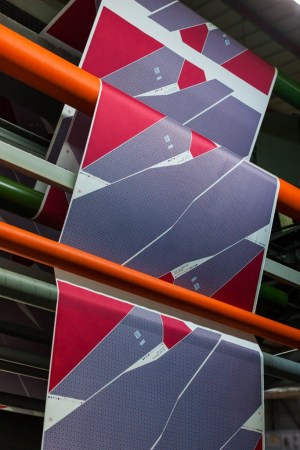 Since its introduction in 1949, the Hermès silk necktie has set the standard. It is a staple of CEOs, politicians, and royalty. Michael Bloomberg has worn one while opening New York fashion week. Less brave politicos such as John Kerry and Bill Clinton reputedly wear Hermès ties in private, sensitive to being called out for not wearing garments made in the U.S.A. Prince Charles is a devotee, while designer Michelle Smith, founder of the Milly fashion line, sold one to Jackie Onassis during her days as a shopgirl. It was a present for Henry Kissinger.

After bags and scarves, the cravat is the biggest seller for Hermès, which is another way of saying it is the company’s most important item of men’s clothing. Last year, Hermès posted a record net profit of $958 million, with an estimated 10 percent of sales in ties.

The company, which has its flagship store on Rue du Faubourg in Paris, was founded in 1837 by Thierry Hermès to supply noblemen with beautifully made saddles and harnesses. It branched out into making bags and scarves in the thirties and introduced the necktie in 1949. Legend has it Hermès began selling ties after staff at a store in Cannes noticed a neighboring casino turning away gamblers who tried to enter sans cravat.

The story of how Hermès moved into designing its distinctive animal prints is equally legendary. Designer Henri d’Origny, who remains one of the company’s key necktie designers at the age of 79, joined Hermès as a freelance designer in the late fifties. Not long afterward, he was doodling patterns of equestrian motifs in an empty Hermès shop when Patrick Guerrand-Hermès, a member of the dynasty, looked over his shoulder and liked what he saw. The first collection of Hermès animal-print ties was released in 1965, and they have done a roaring trade ever since.

Hermès remains a family business. Pierre-Alexis Dumas, a sixth-generation descendant of the company’s founder, is artistic director. The company has rejected the outsourced, mass- production culture adopted by so many of its competitors, choosing to weave, engrave, and print its ties at middle-size workshops, known as ateliers, in Lyon, the longtime hub of the French silk trade.

“We manufacture our ties, from the first thread to the orange box, in our workshops in Lyon,” says Goineau. The design process takes between six and eight months, requiring more than 2,000 hours of work for especially elaborate patterns. Once a design of the tie has been drawn in the Paris studio, it is divided into a number of frames by the engraver and sent to the printer for color tests. Hermès uses a chart of 70,000 colors, which is unique, according to Goineau: “It is difficult to count the number of colors included in a tie, since its details are so subtle,” he says.

The assembly stage for the ties takes another six months. Giant rolls of silk, imported from the company’s farm in the mountains of Brazil, are spread across 50-meter tables. Artisans mix each color into the tie, applying it meticulously in an effort to find the right pattern. The silk-twill thread is then woven and undergoes several discrete stages of reviewing and finishing. “We control the whole chain of weaving to ensure a constant quality,” says Goineau. “The solidity of the twill is exceptional.”

On the surface, the Hermès tie is made like just any other: The pattern is traced, the material is cut, and the pieces sewn together to make the tie. But several factors mark Hermès as unique. While most ties manufactured by other companies comprise three pieces of fabric—the large end (the blade), the small piece (the tail), and, between the two, the neck piece (the gusset)—the Hermès tie contains only the blade and tail. “When we print ties, we print the linings at the same time,” Goineau explains.

The creation process also gives the Hermès tie its unusual ability to withstand years—decades, even—of wear and tear. “When we ask someone what he has done with his old ties, they usually tell us that they have thrown them away, but not the Hermès ones. None of our clients throw away an Hermès tie,” says Goineau. He attributes the special durability to the triplure, a wool-and-cotton lining. “We have only one triplure in our tie, while our competitors use two materials,” he says. “The advantage is that this material supports very well if it is dry-cleaned.”

Just a year after it has first been designed, the tie hits Hermès stores. The company introduces two new tie collections each year, continually making subtle modifications to established designs. For instance, throughout the years, the 59 EA vintage silk tie has had more than 100 different colors applied to it. “Our designs evolve perpetually—we never engage in a big revolution, but we change in each collection the size of the designs, the rhythm, and color combinations,” says Goineau.

Hermès divides its ties into the whimsical and the classical, with each group featuring heavy-twill and light- twill fabrics. The most popular whimsical ties are the signature animal prints. Current designs range from duck and bat prints to giraffes playing basketball, not to mention an Italian motorbike rider sharing the road with horses.

The Hermès tie is perhaps the men’s fashion equivalent of an observation made by late Italian novelist Giuseppe Tomasi di Lampedusa in The Leopard: “If we want things to stay as they are, things will have to change.” Recent innovations include silk ties made of thicker material and the size of the majority of ties being reduced to a width of 8 centimeters (compared with 9.1 centimeters previously). The latest collections reference the digital age, too, with ties featuring keyboards, microchips, and USB sticks. The USB tie even contains a small pocket for storing a flash drive. “Our design is inspired by the contemporary items of a man living in the 21st century, so that is the digital world, sports, and hobbies,” Goineau says. This season the theme is the sporting life, with designs featuring kite-surfers and boomerangs.

Goineau maintains the company’s clientele extends beyond bankers and businessmen: “It has now been about four years that it has not been mandatory to wear a tie at work. It has brought a new style of clients, such as artists and architects, who use ties for pleasure.”

Once you join the Hermès tie club, you never want to leave—although the price (currently, a tie in the U.S. starts at $195) sometimes causes memberships to lapse. My mother told me she had bought my father an Hermès tie sometime in the seventies, only for him to lose it at an airport. I asked her why she didn’t buy a replacement. “You came along, and I couldn’t afford it,” came the disconcerting reply. Father, forgive me.