Thomas Pink, like many brands in the LVMH Moët Hennessy Louis Vuitton portfolio, is viewing the recession as a chance to boost market share and increase sales. 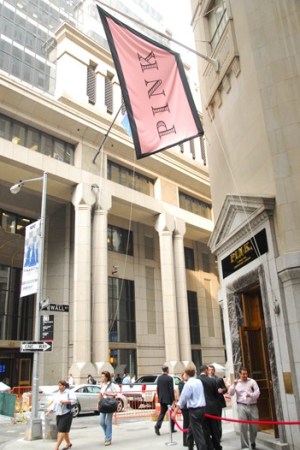 This is particularly true of the U.S. market, where the high-end shirtmaker generates 40 percent of its revenue via 22 directly operated stores. The brand is hoping to increase those numbers with a new strategy that includes revamping the retail experience, updating assortments and testing a new distribution model.

“I want to make our stores the most exciting, vibrant environments,” said Humbert, adding she is stepping up clienteling programs. “The economic landscape has changed the way we need to do business. We need to raise our game in terms of service.”

While Pink is looking to broaden its reach in its retail stores, its growth in the U.S. will be supported for the first time by a wholesale business. Thomas Pink’s signature shirts were placed in 10 Neiman Marcus doors this fall and the brand is close to inking a deal with another high-end department store for holiday.

“We have a huge advantage in direct retail and we’re not walking away from that. We control it and that gives us comfort,” said Thomas Pink president and chief operating officer Jonathan Heilbron. “But the brand’s potential is far bigger than the pace we can expand ourselves. Wholesale is the fastest way to get us into locations where we are not well known without making a huge capital investment.”

While sales slowed during the depths of the recession, Heilbron said the American consumer is coming back, and the company plans to help woo stingy male shoppers with an updated assortment. It’s adding a new range of trousers and a jean to the shirt offering. The successful launch of the lower-price Traveler range last year is prompting the brand to offer additional shirts with functionality and more moderate prices. Thomas Pink also is boosting its position as a shirt authority, offering customers more information about the product and a wider array of shirts.

The firm also is investing in its women’s business, which accounts for 15 percent of total sales. A new head of women’s design has updated shirtings and expanded its office-friendly ready-to-wear. Humbert said she’s also looking to create female-friendly environments within the stores. “When you first walk in, it’s a men’s store. We need to make the female client comfortable.”

Outside of the U.S., the executive said Thomas Pink will fuel growth by expanding in Asia. Pink opened its first boutique in Hong Kong earlier this fall, and is looking to move into India and widen its footprint in China, where it operates nine stores.