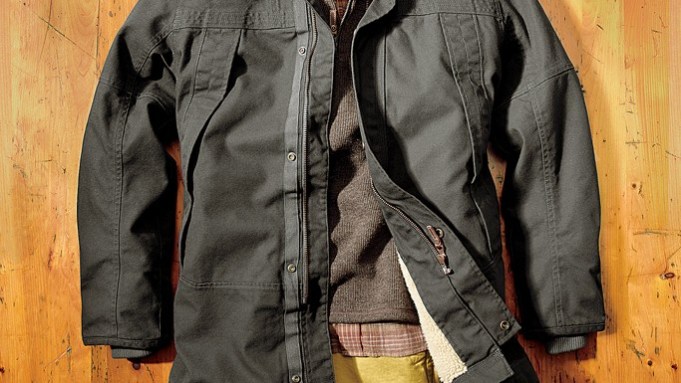 Timberland is ready to re-boot its apparel business.

In the wake of the early termination of its North American apparel license with PVH Corp. in 2011, followed by its acquisition by VF Corp. in the same year, Timberland has taken its domestic apparel business in-house and will relaunch it at retail this fall. The new Timberland apparel line is more upscale, has higher prices and is focused on outerwear — bringing the brand more in line with its core footwear offerings, as well as its global apparel business.

“It’s definitely moved from a moderately priced line to a more premium approach, with mid- to high-priced product,” said Patrik Frisk, president of Timberland, of the line’s shearling coat at $1,298, leather bomber jacket at $898, waterproof parka at $248, selvage chinos at $98 and corduroy shirts at $78. “This is guided by the materials we choose and the make of the garments. The old apparel line was based mostly on cotton shirts and polos, which was driving the business. Now we are focused on premium outerwear pieces. It connects to the positioning of our footwear. I think it becomes a much clearer brand message.”

Timberland is targeting specialty stores with the fall launch, rather than department stores, which were previously the key distribution channel under PVH. The fall line — which is primarily men’s, with a few women’s pieces — was shown to retailers at the trendy Capsule show in New York last month and will be at the upcoming Project show in Las Vegas.

“Timberland going forward has to be known for style and not just about performance,” said Frisk. “Timberland has the opportunity to be more premium in apparel. That is how we are in the rest of the world and that is where we believe the brand should be.”

The fall lineup includes waterproof jackets and coats with details that reference Timberland’s signature quad stitching on boots and locker loops fashioned from Timberland’s rugged shoelaces. Plaid shirts have a slimmer fit and denim is blended with extra durable Cordura fabric. Outerwear is the most important facet of the business and is expected to account for 75 percent of apparel sales in the first season.

Non-outerwear categories like chinos and shirts will grow in importance for spring and summer. Fleece is expected to become a key category as well, said Frisk.

About three-fourths of the apparel line will be sold under the Timberland Earthkeepers label, which signifies environmentally friendly product. In Earthkeepers apparel, at least 50 percent of the product is made from recycled, organic or renewable materials. In leathers, the material must be from a tannery that’s silver- or gold-rated by the Leather Working Group.

Timberland, which rang up $1.5 billion in sales in 2011, set about repositioning the apparel business following its acquisition by VF for $2.3 billion. Consumer research gleaned that the brand scored high marks for durability and quality in apparel, but lower impressions in areas like fit and fashion. “The style component was maybe a little dated and not as contemporary as it could be,” said Frisk. “We saw a clear opportunity for us in the space that sits between the extreme outdoor brands like The North Face, Marmot and Mountain Hardwear and the Polos and Tommy Hilfigers of the world.”

Timberland assumed responsibility for the North American apparel business in September 2011 and the last of the licensed PVH product was flushed through retail in 2012. “There has been very little apparel in the marketplace, so the idea is that we reenter the marketplace with a very clean slate,” pointed out Frisk.
PVH launched its licensed Timberland apparel business in fall 2008 and focused on building the brand primarily in Macy’s Inc. doors. However, PVH complained of low gross margins from the business and negotiated an early termination of the agreement in the second quarter of 2011.

By exiting Macy’s and targeting independent specialty stores, Timberland has drastically downsized the scope of its apparel business and is starting small with the new strategy. “The great thing about being part of VF is that we take the long-term view. The idea is for this to become successful over time. We don’t want to go to a volume business right away before we understand the apparel market,” said Frisk.

The apparel will also be distributed at Timberland’s own retail stores. The brand operates 14 full-price stores and 52 outlets in the U.S. Overseas, the company operates 155 stores and 66 shops-in-shop in Asia, in addition to franchised and distributor-owned stores.

The U.S. apparel line has much greater crossover with Timberland’s international collections, with most of the apparel designed out of the company’s London design center. A new merchandising, sales and marketing team for the U.S. apparel business has been set up at Timberland headquarters in Stratham, N.H.

The company is looking to its success in apparel overseas as a growth model for North America. In Asia, 50 percent of total Timberland sales are in apparel and in Europe that figure is 30 percent.

“VF is one of the largest sourcing organizations in the world. At the end of the day, that’s what we do,” said Frisk. “From relationships with suppliers and factories and the knowledge that sits in the organization, we have this big VF engine in the background. That means quality, speed to market and execution that will make us a better apparel company very quickly.”

Founded in 1973, Timberland is celebrating its 40th anniversary this fall with a marketing campaign centered on the tag line: “Best then. Better now.” The advertising spotlights the apparel launch, with some ads focused just on the outerwear and sportswear. “The entire campaign includes apparel. We would never take a photo without showing the footwear before,” noted Frisk. “The campaign is much more focused and clear and beautiful. We are adding the style component that has been missing before.”