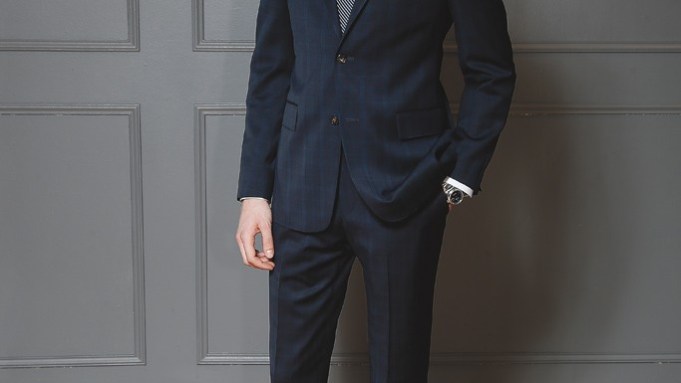 Peerless Clothing Co. is adding a new name to its stable of designer brands: Todd Snyder.

And it might not be the only megaapparel group to be getting behind Snyder. Word is that the designer also has signed a license for shirts and ties with PVH Corp. The deals would represent a major vote of confidence in a member of the next generation of American men’s wear designers, adding a license with Snyder to those the two groups already have, including household names such as Ralph Lauren, Calvin Klein, Michael Kors, Elie Tahari, Tommy Hilfiger and Donna Karan.

The association with Peerless came about serendipitously, according to Snyder.

Nordstrom carries the designer’s suits, which retail for $1,495 to $1,895, in five doors but reached out to Snyder while brainstorming about how to “reinvent their designer suit department.”

David Witman, executive vice president and general merchandise manager of men’s for Nordstrom, “liked my style and asked if there was a way I could rethink my tailored clothing and pare down the price,” Snyder said. At the same time, he said, Peerless was seeking a young designer to throw its muscle behind.

The result was a license for Peerless to produce the Todd Snyder White Label collection of tailored clothing and sport coats, which will launch at 25 Nordstrom doors exclusively for fall. “The stars aligned,” the designer said with a smile.

The suits will retail for $795 to $995 and sport coats will sell for $695. The suits will feature a narrow lapel, a trim chest and armhole, a soft natural shoulder and a slightly shorter body length. The suits are half-canvas and the collar and lapels are pick-stitched. The sport coat is unlined and “very clean,” he said.

There will be one suit model and one sport coat, each available in six fabric choices for the first season. Snyder expects to expand the offering in future seasons when distribution will be opened up to other retailers in addition to Nordstrom.

White Label will be produced in the Hart Schaffner Marx clothing factory in Chicago. For Snyder, it was essential that the collection be manufactured in the U.S. And when he visited the facility, he said he was overwhelmed by the level of expertise of the workers. “They make a great suit,” he said. “To see the workers that they have and how long they’ve been there, it’s amazing. And to sell it for $795 represents good value for the customer.”

But Snyder, who started his career in fashion as a tailor’s assistant in Iowa, had to rework the stock garment in order to give it his own take.

“I flew to the factory and deconstructed their suit and reinvented it,” he said. “The younger guy can wear it but it won’t alienate an older customer either. It’s a tasteful, modern take on clothing.”

In order to complete the package, Snyder knew he had to offer shirts and ties and is said to have signed a deal with PVH.

Mitchell Lechner, president of dress furnishings for PVH, would not confirm the deal, but called the designer a “real up-and-comer. He’s very dynamic and I’m very respectful of what he’s doing. He’s one of the most exciting young designers out there.” Sources said the 100 percent cotton shirts will be a mix of solids and patterns. Ties will be all silk except for a cotton-khaki version and will be centered around navy and gray, but with some updated patterns sprinkled in, according to sources.

Snyder believes the line will open the door for similar opportunities for other rising designers. “We want to revolutionize men’s wear,” he said. “I want to dress a lot of people and don’t want to be exclusive. This is the first thing that will have scale and [thanks to Peerless and PVH], we don’t have to do the heavy lifting.”