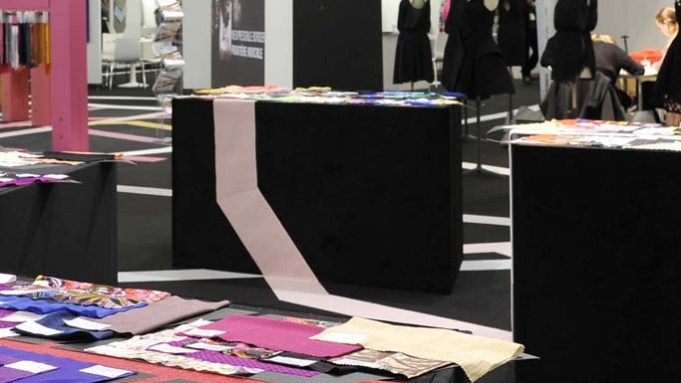 PARIS — Innovative materials, fresh textures and value-added fabrics are leading the way for textile firms as they spring back to life following a long, recession-induced slumber.

“Innovation is the only way for a manufacturer to differentiate itself from the competition,” said Siegfried Winkelbeiner, chief executive officer of Schoeller, which has seen its washable fashion fabrics segue from factory to catwalk, as seen at Giles Deacon’s London show last week. “Fashion is turning more sporty and sporty calls for technical.”

“This season’s fair is formidable, very dynamic,” said Véronique Nichanian, men’s wear designer at Hermès, who was spotted at Ratti. Her colleague, Christophe Lemaire, in charge of Hermès’ women’s wear, said while he was “not obsessed with technology,” he appreciated “innovation with a purpose.”

“I like fabric that ages well, such as textured cotton, and so I love the Japanese offering, because it comes with a twist,” Lemaire added.

Designer Andrew Gn said, “There is a lot more finishing, such as waterproof and anticrease, this season. With this crazy weather, technology is getting more important.”

Eurojersey was on course with its Sensitive range based on Lycra spandex and with comfort as a key feature. Ultralight, breathable, wrinkle-free and equipped with UV protection, the fabric has successfully been employed by Prada for men’s wear jackets, as well as in swimwear by Victoria’s Secret.

“Between 2006 and 2012, we have invested 40 million euros [$54.9 million at current exchange] in technology to make sure we can face the next five years,” said Eurojersey ceo Andrea Crespi, adding he expected five to 10 percent “sustainable growth” in 2014. “The opportunity for us is that it’s made in Italy and that we deliver on time.”

Sergio Tamborini, ceo of the Marzotto Group, said, “Business is not bad. We have grown double digits, but there is no stability on the market, so what’s most important is the service,” adding, however, that with ever-shorter delivery times requested by fashion brands, eventually creativity “will have to be sacrificed.”

For Hervé Pierre, creative director of Carolina Herrera, gazar and jacquards were among the standouts. “But you know, PV is not about trends any more,” he said. “A color is like a hemline, it has lost its relevance. We come here for the ingredients and then we make our own recipe. You find a print you like, then you choose a texture, ask them to add some stretch, [and] voilà.”

Designer Paul Smith, spotted at Lyria, said, “People get overwhelmed with trends when they don’t know what they are looking for.” He nevertheless observed that “color in shirting” was in abundance this season, “which is very interesting.”

Miroglio Textile has joined forces with Archivio Mantero, which supplies the likes of Chanel and Louis Vuitton, to launch a collection of printed scarves. The company reinterpreted 55 historical patterns from Mantero’s archives, while pushing the retail price down to 40 to 90 euros, or about $55 and $124, thanks to cost-friendly innovation in digital printing.

“This is important in order to bring business back from Asia,” said Chiaretto Calo, Miroglio’s global commercial director, while vice president Elena Miroglio vowed to make the supply chain to the U.S. shorter and invest in manufacturing there to combat foreign competition.

Yiqing Yin, Léonard’s new designer, noted she liked “that there are so many young textile designers here,” adding “when people are new to the industry, they have a more experimental approach.”

Turning up the notch were Pepe Lowe and Hannah Hope-Johnson, two winners of the Texprint Competition. Hope-Johnson — who sells her designs for 350 to 800 euros, or $480 to $1,098, apiece, including the rights to her computer file to ensure exclusivity — said her floral and geometric designs have been snapped up by French and Italian luxury brands. Lowe’s technique of mixing stitch with print to conjure 3-D effects made an impression on sportswear brands.

At Texworld, designers praised the quality of the offer on show at a competitive price positioning.

“The capability of the mills is improving radically and they have better designers,” said April Sauva, a U.K.-based designer for Corset Story, citing interesting jacquards, brocades and sparkling fabrics at the show.

“We went to Première Vision for the trends forum, then we come here to look for them,” said Louise Hart, a designer for U.K. retailer Matalan.

Texworld and sister show Apparel Sourcing saw visitor numbers rise 11 percent to 13,523 year-on-year. While French visitor numbers were stable, the numbers of British, German, Italian and Polish buyers edged up more than 10 percent, and U.S. attendees were up 12 percent.

Texture was a strong theme here, too, with jacquards and bouclés, as well as draped fabrics, digital prints and new developments in technical fabrics.

Taiwanese mill EverShine Y+F, which sells to brands such as Burberry, J. Crew and Hugo Boss, and was a first-time exhibitor at Texworld, was showcasing a new polyester-and-spandex blend that appears plain when dry but reveals a pattern when wet, and is proving popular for swimwear.

NEXT: Top Trends at Première Vision >>

• 3-D effects: Jakob Schlaepfer pushed the envelope with embroidered lace that was printed with foam, whereas Solstiss’ lace was enriched with diamond-shaped silicone cubes.

• Color: Canclini added color to its shirting fabrics with a range of whimsical prints such as tiny strawberries, fish or tennis balls. Malhia Kent employed color blocking, mixing acid orange and ice-blue on her nylon and paper woven tweeds, while Preciosa collaborated with Pantone to provide crystal for textiles in next season’s forecasted trend colors, including super lemon, sheer lilac, tango red and viridian green.

• Lightness: A standout was the paper-finished nylon at Ratti, while Nikke’s thin but dense suiting fabric drew many buyers, with the brand’s textile designer, Masahiro Oono, promising “to make it thinner every season.”

• Texture: The new organza jacquard at Ratti, part of a broad range of novel textures, boasted fine sculpting qualities, while Solstiss provided innovation through a Neoprene-like fabric that was coated with the house’s lace.