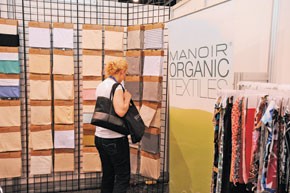 The show, which ended a three-day run Thursday at the convention center here, drew about 400 exhibitors offering the latest innovations in three main categories of the sewn products industry: fabric, sourcing and technology.

Trade was a focus as the House voted to delay a vote on the trade agreement with Colombia despite the objections of the President, who had given lawmakers 90 days to approve or reject it.

Commerce Secretary Carlos Gutierrez, speaking at the preshow American Textiles & Apparel Competitiveness Forum on April 7, stressed the importance of Colombia as an ally in South America, where U.S. policies have come under attack from President Hugo Chavez of Venezuela. The forum was sponsored by Commerce’s Office of Textiles & Apparel and the American Apparel & Footwear Association, which has endorsed the Colombia pact.

“The industry lives and breathes free trade, and no matter who’s elected President, there’s no going back,” said Kevin Burke, president and chief executive officer of the AAFA. “Jobs lost in the Fifties and Sixties aren’t coming back. It’s better to focus on employing and educating people with new skills.”

Many of the participants echoed the need to shore up Western Hemisphere trade, but were not optimistic that it would be a domestic priority in the current political and economic climate. The Democratic presidential candidates, Sens. Barack Obama of Illinois and Hillary Rodham Clinton of New York, oppose the Colombia agreement. Opponents have cited Colombia’s human rights violations and the loss of U.S. jobs. Sen. John McCain of Arizona, the presumptive Republican nominee, supports the deal.

“Trade is under attack,” said Tom Travis, managing partner with Sandler, Travis & Rosenberg, a Miami law firm specializing in apparel trade issues. “Consumers and workers, who are voters, are in pain, and the pressure to close the borders is the greatest in 20 years.”

Travis spoke on a panel of apparel and footwear producers called “The Politics of Trade” at a kickoff breakfast on Tuesday.

“Business is tough enough without free trade,” he said, adding that production in Colombia had declined. “We want to balance sourcing by working with vendors who have multicountry facilities.”

Baum also stressed the need for raw materials in the region.

“If we can’t get textiles and fabrics in these countries, trade agreements won’t work,” he said.

As U.S. companies, such as Russell Corp., have built vertical mills in Latin America, business in the region has grown, said exhibitor Roberto Bequillard, president of The Argus Group, a Miami-based manufacturer with operations in El Salvador and throughout Central America.

“Given rising labor costs and currency in China, U.S. companies are looking closer to home,” Bequillard said. “Many, such as Oxford and Kellwood, have dismantled their [cut and sew] operations to Central America. Now they want companies to provide full-service, full-package programs.”

Beyond where to produce, attendees were concerned with how to make operations fast and efficient.

Technology Solutions, with 48 exhibitors, is the fastest growing segment of the show. Exhibitors offered product life cycle management systems that promise to link complex supply systems that may stretch around the globe.

“People are not asking how it works, but how it can help my business,” he said. “Half the people at the show are crying doom and gloom and the other half are getting a wake-up call, realizing they have to reinvent themselves, like Gap, Liz Claiborne and so many apparel companies.”

Among the more interesting technology offerings were applications that create virtual and 3-D designs and patterns, eliminating the need for physical samples.

“It eliminates the need for shipping samples, mitigates time zones and language barriers,” said Roxy Starr, chief technical officer, who said Chico’s and Victoria’s Secret are early adopters of the software, which costs $15,000 to $25,000.

“Anytime you make a virtual sample, you eliminate waste and tie into sustainability,” he said.

“It’s not the trade shows’ place to say ‘You’re green and you are not,'” said Tim von Gal, vice president of Urban Expositions, which produces Material World. “We leave it up to groups like the AAFA and others who have established criteria for that. The challenge the industry faces is proper accreditation.”