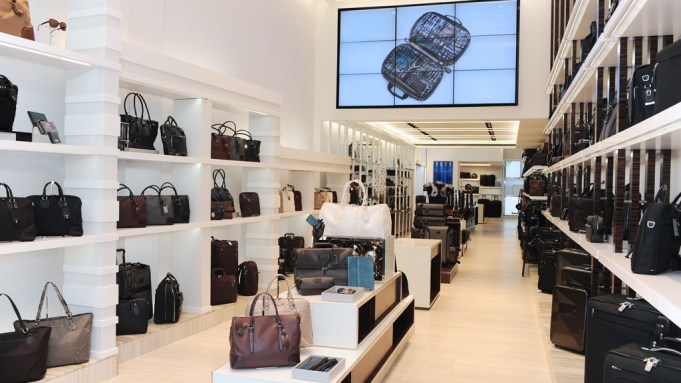 LOS ANGELES — Tumi, the luxury travel and accessories brand that went public in April, has opened a flagship on Rodeo Drive in Beverly Hills as it presses forward with retail expansion.

Designed by San Francisco architecture firm Brand + Allen with Tumi, the new 2,000-square-foot store — the brand’s 75th in the U.S. and 12th in California — marks the debut of a retail concept that seeks to broaden the appeal of the brand’s merchandise. It elevates the positioning of accessories and products aimed at women, both small but growing parts of Tumi’s business.

“Rodeo Drive is a landmark location,” said Alan Krantzler, senior vice president of brand management at Tumi. “We really wanted to make, not so much a departure, but an acknowledgement that we were on a special street and build a store that would be as sophisticated and as inviting as possible given the neighborhood.”

Unlike other Tumi stores, the Rodeo Drive unit is separated into three rooms divided by ceiling heights. Tumi’s women’s and premium goods are in the front room, which has an 18-foot ceiling. The middle room, where the ceiling dips to 10 feet, has accessories such as sunglasses, belts and iPad covers, and the back room, where the ceiling rises again to 18 feet, is the travel salon.

The grouping of women’s products prominently at the front of the store is intended to raise awareness of Tumi’s women’s offerings. Krantzler indicated that about 60 percent of Tumi’s customers are men while 40 percent are female, but only 20 percent of the brand’s sales are of women’s products. “We’ve had an over 25 percent increase in women’s this year versus last year. It is growing very nicely for us, but our goal is to still grow it to be a higher percentage of our total,” said Krantzler.

Krantzler pointed out that the biggest merchandising break from Tumi’s previous stores at the Rodeo Drive location is a 25-by-8-foot wall of accessories. “Accessories is such a focus for us. We really wanted to pull all the accessories across the different collections, male and female, and make it a destination,” he said.

Last year, accessories accounted for 14 percent of Tumi’s net sales, compared to 46 percent for travel products like wheeled and soft carry-on luggage, satchels, boarding totes, garment bags and cross-body bags, and 40 percent for business cases. “We are still looking to increase the accessory portion of our business. There is a lot of opportunity to get more people into the brand with more accessories,” said Krantzler.

With the new store design, Tumi has lightened its retail space and added video content. The store features cream-colored flooring, white shelving, limestone fixtures and LED lights to brighten the displays. A nine-panel video system projects brand campaigns and product imagery. “Our goal is to get customers to understand the product more and see us not just in a functional light, but also from a lifestyle perspective,” said Krantzler.

Tumi has opened 13 full-priced stores this year and expects to open another two before the year is out. Next year, 13 stores are planned and, after that, Tumi anticipates annual growth of eight to 16 company-owned stores to continue. The company has identified some 200 potential sites for its stores. A typical store is around 1,300 square feet.

Tumi’s average annual retail sales per square foot in company-owned stores has climbed from $642 in 2005 to $972 last year, and Krantzler said that they have risen another 10 percent so far this year. Krantzler credited “higher-priced product and also increasing conversion” with driving sales per square foot upward. Based on his estimate of Tumi’s current average sales per square foot of roughly $1,070, Tumi’s Rodeo Drive store could generate at least $2.14 million in first-year sales.