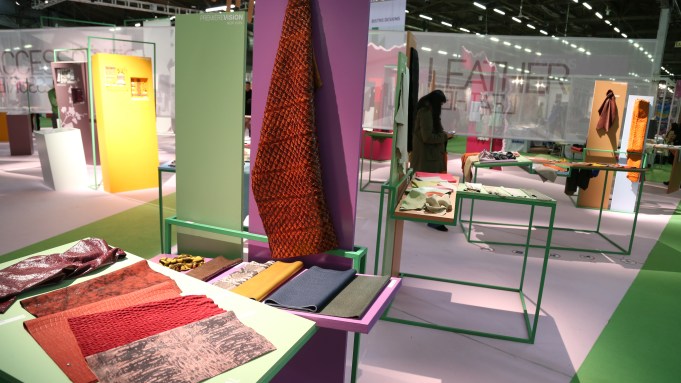 The textile and sourcing world is being impacted by today’s turbulent times on a multitude of levels and those developments are influencing strategic planning across the supply chain.

This is often seen in divergence — with talk of the potential pitfalls and opportunities of the Trans-Pacific Partnership agreement mixed with the momentum building toward local production and the challenges the movement still faces at last month’s trio of trade shows in New York — Première Vision, Texworld USA and Milano Unica.

It’s apparent in fabric development and purchasing, as economics affect fiber prices and companies look to balance ongoing desires for sustainability with innovation.

As designers and merchandisers create and choose their spring 2017 fabrics, the issues of the day can also be inspirational, said Sabine Le Chatelier, deputy fashion director at Première Vision.

“The season will be marked by mobility and movement, by and unbalanced creativity seduced by instability,” Le Chatelier said in her “Trend Tasting” seminar.

Le Chatelier said new fabrics are influenced by the “uncertainty and chaos that surround us,” while also integrating the need for flexibility and a “raw, unfiltered beauty” seen in opaque and transparent materials.

Synthetics are back in favor, Le Chatelier said, because they have evolved and represent a modernity and unnatural element, as portrayed by glossy polyamide or polyester prints with a “chemical spirit,” and looks such as artificial or abstract florals and unnatural motifs, as seen at Italy’s Fantasie Tricot and Rodilosso.

Guglielmo Olearo, director of international shows at PV, held at its new home at Pier 94, said, “New York is a first indicator of how business will be this year. It has become more attractive in the eye of European exhibitors because of the weakness of the euro. But people are trying not to be too pessimistic or optimistic, but realistic. We are in uncertain times.”

At PV, where new areas were dedicated to Leather and Manufacturing for mostly European makers, Manufacture New York, an incubator and design and technology center for local production, also set up shop.

“Quality and proximity, and delivery time have become more important in global manufacturing,” Olearo added. “For European companies, places like Morocco and Turkey offer that, but it’s also why we brought in Manufacture New York as an opportunity for our attendees to see what they are doing.”

This included digital fabric printer MTex Solutions, which has a factory in Hauppauge, N.Y., but is setting up a satellite facility at MNY’s Brooklyn location, and Exodus Design & Printing, which does custom screen printing and design.

“We want to create a 360 degree ecosystem that goes from education and workforce training to mentorship and full production, and companies that serve all of these areas,” Bland said.

At Texworld USA, Matin Roshan, an executive at Los Angeles-based Laguna Fabrics, said the company has been doing well with Lenzing’s Tencel fiber in its knit lines made in California.

Roshan said the resurgence in Made in America “has been great for us,” with brands and retailers working with the company for its quick turns on production and flexibility in styling and order size.

At Tuscarora Yarns, ceo David Roberts said fewer people had attended due to the blizzard that hit town just prior to the show, but he still had “a few good appointments” making it worthwhile.

There was some talk of concern at the shows about the impact of the pending TPP on the momentum for Made in America that has built in recent years. Some felt the production that has emerged in the U.S. and Central America has established a niche for better-priced, quick-turn yarns and knitwear that won’t be affected by TPP, while others contend the pact will give an unfair advantage to participatory countries such as Vietnam and Malaysia.

Josh Teitelbaum, deputy assistant secretary for textiles, consumer goods and materials at the Commerce Department, speaking at Texworld, said the Obama administration negotiated the agreement with “sensitivities to the domestic industry” in mind.

He noted that this specifically led to longer phase-out periods for certain yarns and fabrics used in textile trade within the Central American and North American Free Trade Agreement countries, “allowing time for the domestic industry to adjust to the new trading environment.”

Roberts was also part of a panel discussion at Texworld on the importance of innovation in textiles. At Tuscarora, which spins about 2 million pounds a week of specialty yarns in the Carolinas, he said, “Our real strength is in the ability to put together fibers of all sorts, from cotton to rayon, viscose, modal and Tencel with varieties of polyester, linen and wool.”

Tricia Carey, director of business development for apparel and denim at Lenzing Fibers, which produces viscose, modal and Tencel fibers, said the focus is on improving fibers by creating performance characteristics that add value for the consumer. At Lenzing, new innovation in modal includes modal color and modal black, produced by dope dyeing that adds color before the fiber is extruded for more longer-lasting color, and better water and energy efficiency.

Terry Lawler, market development manager for Eastman Chemical Co., said as one of the largest acetate yarn producers in the world — all spun in Kingsport, Tenn., “Investing in new technology is a big part of our growth plan. We are looking at ways to expand our dope dyeing capabilities, which is so important for sustainability.”

Lawler added, “We also have new fiber developments with higher filament counts for greater strength, and we’ll be coming out with a new performance fiber in the fall.”

Ruggero Rossi, a principal at Rossi Lorenzo E Figlia, was showing the company’s latest line called IceDream, a collection of “light, breathable and crease-resistant” fabrics that uses what it calls a “new generation cotton.” The group of summer-weight colorful fabrics utilizes a double-twist, specially treaded yarn to achieve the effect.

Paul Guggi, sales and marketing director for North America at Ratti, said the company has been able to keep sales up because it served the entire market, with fabric groups for the upscale, midtier and mass market.

Ratti specializes in full-color prints all printed in Italy, and manufactured in Italy and China. As for business, “men’s has been soft, especially neckwear,” Guggi said, while “women’s is better, there’s more excitement in the market.”

Principal Alessandro Barberis Canonico said, “Last season, the U.S. was good for us thanks to the advantage of the strong dollar against the euro. Now, things are more challenging because of the economy and what’s going on in the world.”